“I think our nominee is going to be someone that embraces the future.”

Marco Rubio made a campaign stop in New Hampshire today and dismissed Donald Trump’s current front-runner status, saying that Trump will not be the Republican nominee for 2016.

Rubio Dismisses Trump in N.H.: He Won’t Be ‘Our Nominee’

“Ultimately the Republican Party will reach out to all voters based on who our nominee is. And I don’t believe Donald Trump will be our nominee,” the Florida senator said after speaking to a small crowd outside a car service center in this town of Orford. “I think our nominee is going to be someone that embraces the future, that understands the opportunities before us, that’s optimistic but realistic about the challenges before us.”

“There’s another gentleman running for president whose slogan is Make America Great Again. And I understand what he’s trying to say. But I would remind him that America is great,” Rubio said. “Ask yourself this question: who would you trade places with? Would you rather be China? Would you rather be Brazil or India or anyone else for that matter? There’s no nation on earth I’d trade places with. The issue’s not that America isn’t great. The issue is that America has the chance to be greater. And we’re not fulfilling our potential.”

It’s still very early to make predictions. At some point in the recent past, Rubio, Scott Walker and Jeb Bush were all considered front-runners as well.

This polling graph from Real Clear Politics tells the whole story so far: 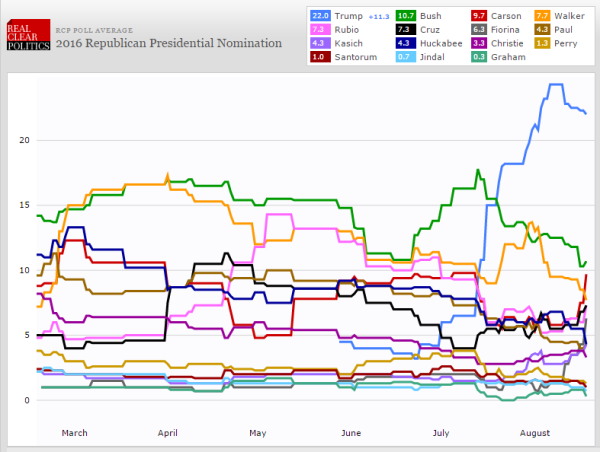 The Yugely smart highly compensated insider consultants have reassured us that Trump peaked at 24% and could go no higher. And they are, after all, Yugely smart — just ask ’em!

Well, Marco, you ain’t gonna be the nominee, either, so I ‘spose it all evens out.

Kondor77 | August 26, 2015 at 4:13 pm
If we hammer Rubio for amnesty, can we also hammer Trump for him wanting an Assault Weapons Ban? But I guess that’s just “an unfair question” to ask the Donald.

Also, if you read his interview at Ammoland, his objection to the assault rifle thing was the politicians are calling AR-15’s assault rifles and they aren’t.

He also objected to NY’s ‘safe law’ and is a ccw permit holder. He’s good on guns, despite those who come up w/ 15+ year examples. (Which is the vintage of the single payer crap, too)

Rubio-Amnesty’s idea of the “future” of America consists of tens of millions of legalized illegal aliens, followed by tens of millions more of their close relatives, and of course a resulting multi-generational dominance of the Democrat Party as all these “new Americans” vote overwhelmingly for the D’s socialist policies.

Rubio still hasn’t figured out why Trump is winning and he’s losing – Amnesty. That’s it. That’s virtually the entire reason.

Take a bold stand AGAINST illegal immigration, as Trump has, and you win.

You’d think the R’s would have figured that out after Eric Cantor’s historic primary loss (first and only majority leader in the House to ever lose a primary).

And the elderly ones brought in on chain migration start receiving Social Security…even though they didn’t pay into it. Go into taxpayer assisted living, etc. It’s a racket and part of the reason why those mandatory ‘investments’ are in trouble.