India seeks Israeli help to become next “Start Up Nation”

India seeks Israeli help to become next “Start Up Nation” 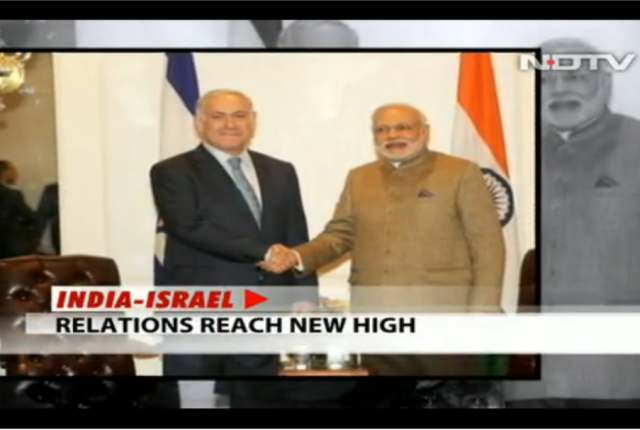 While Europe has been busy targeting Israeli researchers, artists and filmmakers in recent days, Asian countries like India, China and Japan are taking tangible steps strengthening its ties with Israel.

Last week Norwegian Film festival rejected an Israeli film dealing with disability on the grounds that it “did not deal with occupation” or “discrimination of Palestinians.” In Spain, a music festival barred the Jewish-American reggae star Matisyahu for refusing to comply with the demands of the organizers to publically denounce Israel and endorse the “Palestinian cause” — in keeping with the best traditions of Spanish Inquisition. In Paris “peace activists” threatened and harangued visitors attending a day-long festival celebrating Tel-Aviv’s culture with music and gourmet.

Meanwhile in India, thousands gathered to see the opening on yet another Israeli Agriculture Technology Centre in Gujarat State. Israel runs 30 such centres across India, training farmers in latest agriculture technology and farming techniques.

Speaking exclusively to NDTV [PM Netanyahu] said the countries are forming “a wonderful friendship”. Days after Mr Modi announced “Start Up India, Stand Up India” as a mission to launch and nurture entrepreneurs, Mr Netanyahu, whose country is known for its start-up culture, said, “As far as the ‘start up-nation’ (goes), I think this has a lot to do with entrepreneurial spirit. I have noticed that in Silicon Valley… You hear Indian dialects and you hear Hebrew… There is a lot of spirit for enterprise in both our countries.”

Israel is India’s key partner when it comes to start ups, academic and scientific research. This year alone, Indian multinationals have invested millions in Israeli start up and innovation ecosystem, hoping to hires the best talent and acquire cutting-edge technology. India’s private sector involvement in Israel also includes setting up technology incubators and investments in Universities.

Israel too has launched programmes for Indian students, innovators, researchers as well as corporate executives. Every year selected Indian start up founders get a chance to attend the prestigious start-up event “Start Tel Aviv 2015” and connect with Israeli and international leaders in the field. Israel’s Council for Higher Education offers hundreds to scholarships to Indians interested in pursuing higher education in Israel.

For a developing country like India, unlocking entrepreneurial potential will be key to its prosperous future. The ‘good old capitalism’ still remain only viable way of reducing poverty and misery known to man. Hundreds and millions have been lifted from extreme poverty in India and China alone, since these two countries shifted from state-controlled socialist economy to open market capitalism.

India has a long way to go, overcoming its 5 decades-long socialist legacy. Bloated bureaucracy and absurd regulations still stifle country’s entrepreneurial spirit, technological innovation, and industrial growth. But giving credit where it’s due, Prime Minister Modi has taken right steps by cutting regulations and reducing state control on the economy. He is also the driving force behind India’s recent pivot to Israel.

Video: Co-author of bestseller “Start Up Nation” Saul Singer talks to Indian and Asian students on growing Israel-Asia cooperation in start up sector and beyond:

As India kicks the dust of socialism, which held it down for decades after independence, off its shoes, it is moving rapidly into modernity.

Israel is a modern, living nation, as contrasted with its immediate neighbors.

America will be, again, the Cat King Daddy of start-up nations when we enter what VD Hanson has dubbed “The Post-Obama Renaissance”. We have common cause with modern, living nations all over the world, and we know how to do innovation better than anyone.

A simple reminder for visitors: the Palestinian “cause” is eternal warfare, and its goal is genocide. http://middleeast.about.com/od/palestinepalestinians/a/me080106b.htm

All in the name of what they claim is their idea of God, of course.

Other Muslims recognize that Islam has its origin is Judaism, and functions under the same fundamental laws.

Valerie, in re A Common Word Between Us And You, and although you do not ask for it, I counsel circumspection. This may be of use: http://acommonword.blogspot.com

Israel should make it a condition of any help India asks for, that it stop supporting the “Palestinians” and start supporting Israel in the UN and all other international fora. If India won’t do that then it doesn’t deserve any help.

Hey that Creative ass…er..CL….Class…were ballyhooing India and the other BRIC nations as already being a giant successful start-up nation a decade back……

IS that another prediction they got wrong also?

Good for India and Israel! India, Russia and USA are brothers and should be in alliance, working together as culture developers. Their common root is Sanskrit. Their common mother is Vedas. Israel and India are natural agricultural and commercial partners. I am happy for this development!