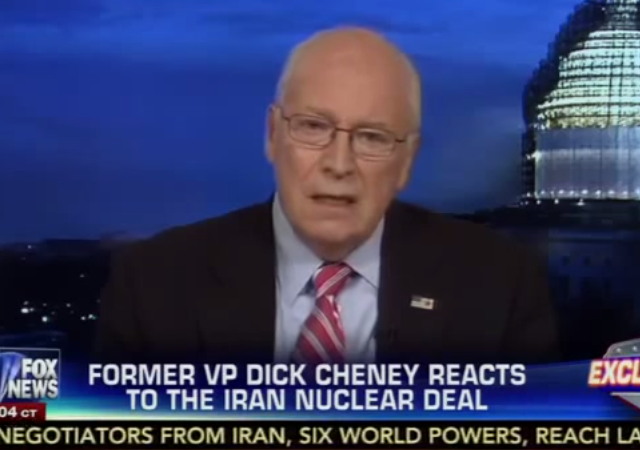 It’s safe to say that former Vice President Dick Cheney is not a fan of Obama, especially with regard to foreign policy. While Obama is pushing congress to approve his Iran Deal, Cheney is ringing alarm bells.

Rebecca Shabad of The Hill:

In an adapted excerpt published by The Wall Street Journal from their upcoming book, “Exceptional: Why the World Needs a Powerful America,” the two write that until Obama became president, Republican and Democratic presidents understood the “indispensable nature of American power.”

“For the most part, until the administration of Barack Obama, we delivered,” they wrote, arguing that Obama has “departed from this 75-year, largely bipartisan tradition of ensuring America’s pre-eminence and strength.”

The Cheneys said Obama has “abandoned Iraq” and is “on course” to do the same in Afghanistan.

The Wall Street Journal piece by Dick and Liz Cheney can be read here.

In case you missed it, Cheney appeared on the Hannity show earlier this month to discuss the Iran Deal. Needless to say, he doesn’t approve:

According to a report from Eugene Scott of CNN, Dick and Liz Cheney think Obama’s Iran Deal has much in common with another historic agreement:

And for members of Congress, who face a vote on the agreement next month, the choice before them is whether to facilitate “Tehran’s deadly objectives with potentially catastrophic consequences for the United States and our allies.”

“The Obama agreement will lead to a nuclear-armed Iran, a nuclear-arms race in the Middle East and, more than likely, the first use of a nuclear weapon since Hiroshima and Nagasaki,” the two wrote in a Wall Street Journal op-ed published Friday night.

Wonderful to remember…through the haze of the terrible last 6.5 years…what it was like to have adults in office who loved their country.

I hope Liz Cheney can play a role in American security in the future.

Actually, it’s looking more and more like America’s power, wealth and sovereignty were surrendered before 9/11/01.

Why else would we even have Obama or would the Legislatures tolerate his obscene spending, pillaging of the economy, lawlessness, etc.?

Why else would we have CAIR and the Muslim Brotherhood dictating policy and squelching speech about the atrocities and standards of Islam in the USA?

Why else would we have swapped Bergdahl for five terrorist leaders?

Why else would we even be considering closing Gitmo?

Why else would our banks now have to be Sharia-compliant?

Why else are we not bombing the heck out of ISIS training camps instead of a limp-wristed campaign in Syria?

Why else are we allowing Obama to Israel as he does?

There is so much more to show that this country and our freedoms have not defended our nation as they should – and that they are allowing our nation to be dismantled, over-run and/or over-ridden by the UN, illegals and Islamists.

There are a lot of unanswered questions, obvious lies, and evidence about the alleged attacks on 9/11 that any scientist, engineer and person with common sense must resolve before believing to anything Dick Cheney and the Bushes have to say.

I will never forgive GWB for his despicable lie that Islam is the Religion of peace and for subjecting the victims of 9/11 to the reading of the Koran at the memorials. There is not now nor has there ever been anything peaceful or holy about Islam, its doctrines, its texts or its actions throughout the centuries.

I for one am tired of being gas-lighted by our elected officials and members of their administrations.

They are like the politician caught in the act of adultery by his wife who said: “Who are you going to believe, me or your own lying eyes?”

So, Cheney, save your breath for your maker when you meet him. I don’t want to hear anything you have to say.

Typo: Why else would we allow Obama to *treat* Israel as he does?

HEAT weakens it. That’s what caused the collapse.

By the way, did you see this cartoon:

[A person is holding up a pointer to a screen with an image of the World Trade Center towers mid-disaster.] Person says:

Based on my analysis, I believe the government faked the plane crash and demolished the WTC north tower with explosives. The south tower, in a simultaneous but unrelated plot, was brought down by actual terrorists.

The 9/11 truthers responded poorly to my compromise theory.

Overall caption or Title text: I believe the truth always lies halfway between the most extreme claims.

What gives this more force is that all the claims are made about the first tower, and there is video of aplane crashing into th second tower.

Maybe he hasn’t ever heard of a steel foundry. Maybe he thinks all those beams and girders are dug out of the ground preformed.

So, Islam is an intrinsically violent religion, but Muslims could not conceivably have perpetrated a major attack on the United States.

No, it must have been American officials who did it — and then quickly sent our military into Afghanistan, and later into Iraq, because they were so determined to surrender American power.

And the way to get us on board with surrendering American power was to make us think there’s a major threat to our safety, and that it comes from Islam.

I get it now: 9/11 was engineered to make us oblivious to the global jihad and to persuade us to accept a weaker America. It makes perfect sense. Why didn’t I see it so clearly before?

U. S.: you’re spot on regarding what “W” did to soften the feelings of Islamists. Still don’t understand why an Imam was speaking at the memorial prayer event held at the National Cathedral. Really don’t know what impact Cheney had on that event shortly after 9/11 yet he was part of “W’s” team and that includes whatever errors that team made; “W’s” team was strong on national defense as such.

Still, “W’s” errors were basically unforced ones, with the exception of having Bremer be the Consul General over Iraq; wrong person for that, made too many bad mistakes. And, whatever errors “W” made, he had the best interests of the USA in his heart.

“W” is not a fiscal conservative by any means, more a member of the GOPe, along with his Dad and JEB; Yanks but of a soft-mellow kind, yet kind of a social conservative, with reservations.

Obama, OTOH: all his decisions have been made with his intent to radically transform our country and he has succeeded greatly, to our ever lasting sorrow. Our challenge has to be to get through the time remaining on Obama’s term in office with as little ongoing damage as possible. Pray for US all!

Lastly, “W” and Cheney are two of the reason that we’re welcoming people with strong positions on the major issues facing US now. Absent Obama’s terms, who can say what this presidential race would look like, perhaps more of the “W” sameness?

The guy who betrayed Israel and paved the way to nuclear war in the Middle East.

True, but it that leads to destroying Israel and badly hurting the US he will see his job as well done. He’s not even trying to hide his aid of Islam anymore. The man looks more and more like an Islamic Manchurian Candidate.