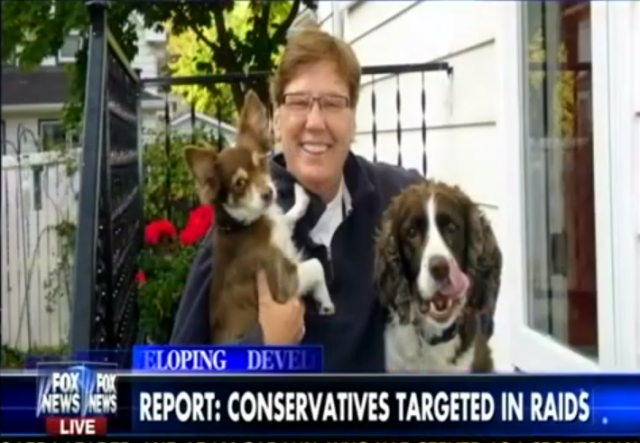 Archer was a woman whose home was raised by paramilitary-style commandos working at the behest of Milwaukee County Prosecutor John Chishom as part of “John Doe No. 2.”

Archer’s only alleged crime was being a former aide to Scott Walker, and being conservative. That flimsy pretense was enough enough to make her a target in the second (hence, John Doe No. 2) secret investigation of Walker, based on the allegation that there was illegal campaign coordination among conservative groups and the Walker campaign during the Recall election.

We have covered the legal proceedings extensively. The federal and state courts have rejected the prosecution’s theory in the face of lawsuits alleging, among other things, that the laws on campaign coordination and the investigations violated freedom of speech. The key case as to the investigation now is on appeal in the state court system, and the John Doe No. 2 investigation is on hold.

Our John Doe (WI) Tag traces the history of the cases.

But lost in this legal wrangling is the damage done to real people, such as Archer.

She explained what happened to her to David French in National Review:

Cindy Archer, one of the lead architects of Wisconsin’s Act 10 — also called the “Wisconsin Budget Repair Bill,” it limited public-employee benefits and altered collective-bargaining rules for public-employee unions — was jolted awake by yelling, loud pounding at the door, and her dogs’ frantic barking. The entire house — the windows and walls — was shaking.

She looked outside to see up to a dozen police officers, yelling to open the door. They were carrying a battering ram. She wasn’t dressed, but she started to run toward the door, her body in full view of the police. Some yelled at her to grab some clothes, others yelled for her to open the door. “I was so afraid,” she says. “I did not know what to do.” She grabbed some clothes, opened the door, and dressed right in front of the police. The dogs were still frantic….

They wouldn’t let her speak to a lawyer. She looked outside and saw a person who appeared to be a reporter. Someone had tipped him off. The neighbors started to come outside, curious at the commotion, and all the while the police searched her house, making a mess, and — according to Cindy — leaving her “dead mother’s belongings strewn across the basement floor in a most disrespectful way.”

Then they left, carrying with them only a cellphone and a laptop.

The story was covered by Megyn Kelly:

Now Archer has sued, as reported in The Milwaukee Journal-Sentinel:

A longtime aide to Gov. Scott Walker has filed a lawsuit against Milwaukee County prosecutors, saying they violated her civil rights during a now-closed John Doe investigation.

In a lawsuit filed Wednesday in Milwaukee County Circuit Court, Cindy Archer accused District Attorney John Chisholm and four others of violating her rights during the secret probe into Walker’s aides and associates.

Archer’s complaint said the Milwaukee County district attorney’s office, under Chisholm’s direction, has “conducted a continuous campaign of harassment and intimidation against individuals and organizations in retaliation for their association with Scott Walker and their support for his policies, especially public-sector collective-bargaining reforms.”

The Complaint is here.

The lawsuit was filed in Milwaukee County court by Baker and Hostetler LLP, the heavy-hitting Washington, D.C. law firm that represented conservative Eric O’Keefe and the Wisconsin Club for Growth in their federal lawsuit against Chisholm and fellow John Doe prosecutors. That lawsuit was stopped at the federal appeals court level because the court ruled that the lawsuit was a state not a federal matter.

O’Keefe tells Wisconsin Watchdog that he is fundraising for Archer’s litigation. Contributions may be made at www.wisconsinjohndoe.com.

We will continue to follow all the John Doe proceedings.

In many parts of the country these individuals would have “accidents” for treating people this way.

“ordered to not call her lawyer”???

IANAL, but that sounds really interesting. Like “someone is in the deep and stinky” interesting.

How can you know if that is a legal order *unless* you call your lawyer and inform him/her of the circumstances?

Since Republicans are in control in Wisconsin I’m not getting why Chisolm isn’t in solitary confinement lockup or working on a chain gang.

As you can imagine, Cindy Archer and others have incurred legal expenses for having committed the crime of being Republican in Wisconsin.

There is a way to donate some money to help pay those legal costs. If you go this this website http://wisconsinjohndoe.com/, there is a “Donate” button.

Some questions arise out of this.

It doesn’t look good that Walker threw her under the bus. If her career has indeed been “ruined”, it’s not because of anything Chisholm did, but because Walker was afraid of getting stink on him. Even if that can be understood and forgiven, when the truth came out why didn’t he apologise and put her back into the career path she should have had with him?

And how has her reputation been ruined? More people know of her now, as a victim of injustice, than ever knew of her before. It seems to me that any temporary damage done to her reputation has been more than repaired, and it’s now better than it ever was. Is there anyone left who still thinks she did something wrong?