Will this be remembered as the moment the rise of Trump’s campaign began to slow and the Republican Party began to heal? 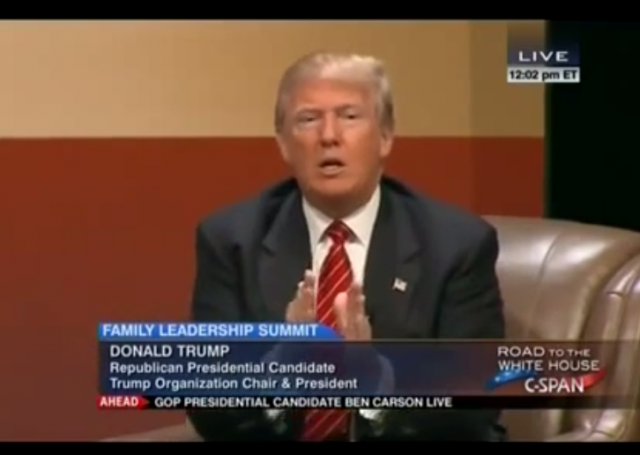 When it came to Donald Trump’s comments on violence from illegal immigrants, I argued that it was possible to differentiate between the man (Trump) and the issue. Whether or not you liked the man, he raised a legitimate issue.

Trump in an interview today made a comment about John McCain that is reverberating around the internet:

“He’s a war hero ’cause he was captured. I like people that weren’t captured.”

Now there is no daylight between the man and the issue.

It’s ludicrous to argue that McCain is not worthy of hero status for his service just because he was captured. It’s not like he was Bowe Bergdahl and deserted. McCain was shot down, and famously endured torture in North Vietnamese prison. He also refused release when the North Vietnamese learned he was the son of an Admiral, and sought to score political points.

There were plenty of people just waiting to find an issue to go after Trump. Illegal immigrant violence wasn’t the issue. This may be it.

Is this the end, or at least the beginning of the end of Trump’s rise?

Will this be remembered as the moment the rise of Trump’s campaign began to slow and the Republican Party began to heal?

Per aide, @ScottWalker just said: "I just want to be clear, @SenJohnMcCain is an American hero."

Just told a crowd in Sioux City: @SenJohnMcCain is an American hero

If John McCain saves the GOP by being the iceberg Trump sinks himself on, I am going to laugh a very great deal. https://t.co/Q8KYoQ4y5x

Trump, asked if he'll apologize to McCain: "No."

Reminder: The Vietnamese offered to release McCain because he was an admiral’s son. He refused. http://t.co/EIbhZJoMvT

Enough with the slanderous attacks. @SenJohnMcCain and all our veterans – particularly POWs have earned our respect and admiration.

I'm repeating myself: TRUMP is a stalking horse for Hillary. His outrageous behavior is planned to ruin/split GOP vote #WAKEUP #mccain #tcot

My disdain for John McCain is legendary. But attacking a guy who spent 5 years in the Hanoi Hilton on his war record is a bridge too far.

Skeptics have been wondering when Trump might go too far. Based on what I'm hearing at #FLS2015 today might have been the day.

.@realDonaldTrump's comments today make him unfit to be Commander-in-Chief https://t.co/EVl1X66gHo

Or will it all just be noise?

#DonaldTrump comment about McCain will hurt him but it's a weekend. Call me cynical but 24 hour news cycle means this will be old by Tues

UPDATE: Leave it to RNC to say something repressive – No room “in this country” for negative comments about John McCain’s war record? You can disagree with the comments, but don’t prove that you are even worse:

.@thehill A sad day for free speech when a major political party says the country has no room for someone's expression.

My @USATOpinion piece: "Trump: I don't need to be lectured" http://t.co/luEYQhgrr9

I don't agree w/ Trump's comment about McCain's service in the military, but I also don't agree w/the slurs McCain levels at conservatives

OK enough already. We get that some of you don’t like Trump but for gosh’s sake make one point or two and leave the comments to others.

I don’t like McCain either. I never liked him. He’s not my Senator though. I only began to truly loath the man when he called me a racist for not getting onboard with his stupid amnesty program. If you go back through my comments I blame him for things most of you aren’t even aware that he’s guilty of.

“The President of the United States of America takes pleasure in presenting the Distinguished Flying Cross to Commander [then Lieutenant Commander] John Sidney McCain, III (NSN: 0-624787), United States Navy, for heroism while participating in aerial flight on 26 October 1967 in North Vietnam. While attacking the thermal power plant at Hanoi, Commander McCain, despite extremely heavy and accurate anti-aircraft fire and more than fifteen surface-to-air missiles in the air, pursued the attack until his aircraft was hit by enemy anti-aircraft fire. Although his aircraft was severely damaged, he continued his bomb delivery pass and released his bombs on the target. When the aircraft would not recover from the dive, Commander McCain was forced to eject over the target. By his exceptional courage, superb airmanship, and total devotion to duty, Commander McCain reflected great credit upon himself and upheld the highest traditions of the United States Naval Service.
Action Date: October 26, 1967

It’s similar to how he refused early release. He could have aborted his mission. He could have tried to save his skin as soon as he was hit. But his objective wasn’t to save his own butt, it was to put bombs on target. So he pressed home his attack even though his plane was mortally wounded.

I’ve heard and read a lot of nonsense commentary. That it doesn’t take much skill to get shot down. True. But it takes a lot of skill and a lot of courage to rate a DFC. To complete your mission while taking that kind of fire.

You’ve at least got to give him that. You can still despise him for everything he did later. I know I do.

On the flip side I can’t find any redeeming qualities about Donald Trump. Maybe he hasn’t damaged the Republican brand as much as McCain, but how could he? Up until 2009 he was a registered Democrat.

Perhaps you might like to complete the full history of Trumps politics. You could start with the fact he was an early supporter of Reagan for President.

Ronald Reagan was “registered democrat” at one point.

I loathe J McCain. I will say he was a genuine war hero as most aviators flying into those conditions were. As any “grunt” on the ground in combat was.

It was J McCain who attacked first, calling supporters of Trump / secure the borders – anti amnesty types “crazies”. I think Trump should apologize for not saying what is reported he said right after McCain apologizes for calling me a crazie.