The Honey Badger don’t give a … about Obama’s gun control demands. 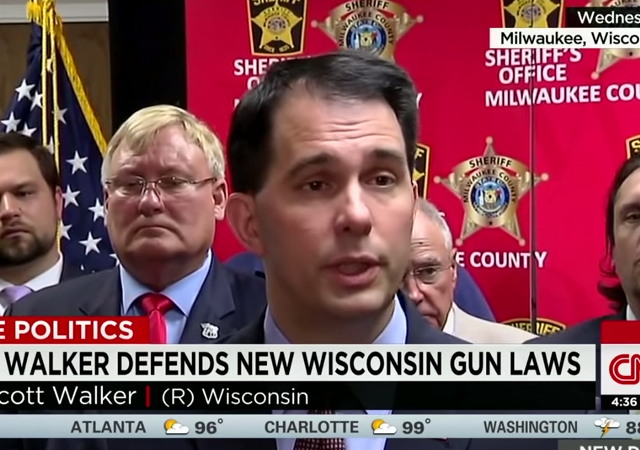 After the Charleston shootings, there was a renewed push by President Obama for restricting access for law-abiding citizens to guns. Scott Walker wasn’t having any of it.

He signed into law a loosening of waiting periods that have been on the books for decades.

The timing of the bill signing comes amid a renewed debate over gun control and race relations after the fatal shootings at a Charleston, S.C., black church on June 17; a white man faces multiple murder charges.

But the measures on Walker’s desk predated the massacre and passed earlier this month in the GOP-majority Legislature with bipartisan support. The second measure would allow off-duty, retired and out-of-state police officers to carry firearms on school grounds.

CNN covered the topic too, and to their credit, they were fair:

If you watched that entire video, you heard John King mention one blogger who called this a middle finger to the left. That would be Leon Wolf of RedState:

Scott Walker Extends the Middle Finger to the Enemies of America

I understand that Scott Walker is not a perfect Presidential candidate. I understand that his initial foray into dealing with the national press was less than ideal and I haven’t been crazy about his blatant pandering on immigration. I also understand that he lacks the rhetorical flair and stage appeal of Sen. Marco Rubio (R-FL) 90%.

And this is a big but. Scott Walker for all his flaws knows how to extend a giant middle finger to the anti-American left and he isn’t the slightest bit shy about doing it. That counts for a lot, not just with me but with a huge portion of the GOP primary electorate who has been begging for someone who could prove that you can win elections and govern effectively while taking on liberal sacred cows at the same time. Scott Walker seems determined to be that guy and so far it is working.

Walker earned his Honey Badger (language warning at link) credentials when he took on the public sector unions and the recall election:

And he hasn’t changed on bit since then.

Well, I don’t know … I don’t really see that yet another law handing special privileges to police when they’re not even “on the job” counts as a big win for We The People.

I am unimpressed. I would be more impressed if I read this:

“The second measure would allow people to carry firearms on school grounds and everywhere else.”

That would be an example of the right to keep and bear arms being less infringed by government. I refuse to acknowledge that former or current police officers have more rights than others.

Does this look familiar?

“A well regulated Militia, being necessary to the security of a free State, the right of the people to keep and bear Arms, shall not be infringed.”

That is the Second Amendment to the U.S. Constitution for those for whom it is not familiar. By the 14th Amendment, it applies to all the states as well. So, why are there any Federal and state laws infringing the right to keep and bear arms?

We can see this source for a SCOTUS quote from United States v. Lopez (1995):

“The Act exceeds Congress’ Commerce Clause authority. First, although this Court has upheld a wide variety of congressional Acts regulating intrastate economic activity that substantially affected interstate commerce, the possession of a gun in a local school zone is in no sense an economic activity that might, through repetition elsewhere, have such a substantial effect on interstate commerce.”