What did Sid Blumenthal know, and when did he know it? 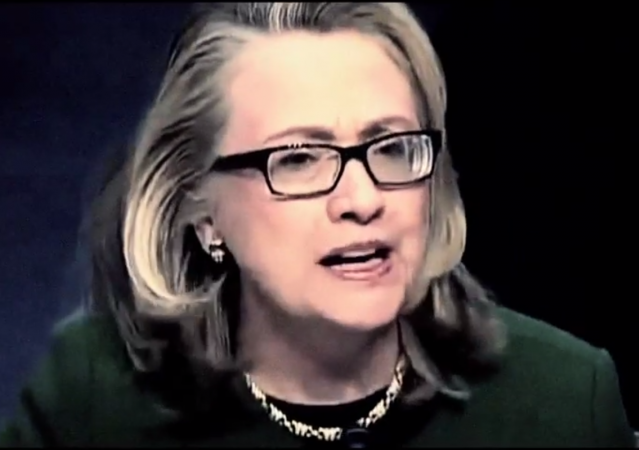 This revelation only confirms suspicions that emails relevant to the Benghazi investigation exist, but have not been handed over to either the State Department or the House Select Committee.

Blumenthal’s emails also reveal he was working with left-leaning sites to “neutralize criticism” of Hillary’s mishandling of the Benghazi massacre. Politico reported:

“While still secretary of state, Clinton emailed back and forth with Blumenthal about efforts by one of the groups, Media Matters, to neutralize criticism of her handling of the deadly assault on the U.S. consulate in Benghazi, Libya, sources tell POLITICO.

‘Got all this done. Complete refutation on Libya smear,’ Blumenthal wrote to Clinton in an Oct. 10, 2012, email into which he had pasted links to four Media Matters posts criticizing Fox News and Republicans for politicizing the Benghazi attacks and challenging claims of lax security around the U.S. diplomatic compound in Benghazi, according to a source who has reviewed the email exchange. Blumenthal signed off the email to Clinton by suggesting that one of her top aides, Philippe Reines, ‘can circulate these links,’ according to the source.”

As if that’s not bad enough, buried in the Politico article is this incestuous tidbit, “during this time, he [Blumenthal] also advised a pair of businesses seeking potentially lucrative contracts in Libya, while sharing intelligence on the country with Clinton while she was secretary of state.”

According to Fox News, the House Committee depositions will continue throughout the day. We will continue to monitor this story and keep you abreast of any relevant developments.

Rep. Trey Gowdy (R., S.C.), chairman of the Republican-led House Select Committee on Benghazi investigating the 2012 terrorist attacks on a U.S. diplomatic facility in Libya that killed four Americans, including U.S. Ambassador Christopher Stevens, said Mr. Blumenthal’s testimony showed that “he was passing on information authored by someone else, and he has no idea about the credibility or the reliability of any of the sources.’’

Mr. Gowdy said the disclosure shows that “one of the folks providing her the largest volume of information was simply and merely a conduit of someone who—it’s still unclear—but may have had business interests in Libya.”

He has to be talking about the former CIA official, not Blumenthal. I mean Blumenthal himseld definitely, not maybe, did have businessess interests in Libya.

ONE OF THE FOLKS = Sid Blumenthal

SOMEONE (he was a conduit for) = the nameless former high-ranking CIA official.

Does Trey Goudy think the explanation for the CIA official either writing himself or putting his name to something someboody else wrote is “business interests???”

No, it’s got to be a foreign intelligence organzation. Even if you find a business interest.

And that CIA official was probably involved with them when he was still at the CIA. I mean CIA people consopiured to get rid of their director.

And they were the ones who said it was spontaneous.

Sidney Blumenthal has an attorney, who, no doubt, has no conflict of interest, and cannot rely on Hillary Clinton being elected president and pardoning him.

So the best advice to him is to answer the questions truthfully. And his email was maybe hacked too.

Now it actually should be no surprise that many of these e-mails are new.

The e-mails that Hillary Clinton turned over were produced through a search. They would have included only those that she forwarded to someone with a state.gov address, but not any that she didn’t forward except those that turned up in a search for the words Libya or Benghazi and a few other search terms. The actual words.

That doesn’t mean ones that a librarian might have classified as concerning Benghazi or Libya, but that actually used the very words Benghazi and Libya and so on.

According to that document from the earlier news conference, here is a summary of how Clinton’s attorneys, whom she tasked with the job, said they sorted through, but it specifically did not say each e mail was read.

• First, a search was done of all emails Clinton received from a .gov or state.gov account during the period she was secretary of state — from 2009 to 2013.

• Then, with the remaining emails, a search was done for names of 100 State Department and other U.S. government officials who Clinton may have had correspondence with during her tenure.

• Next, the emails were organized and reviewed by sender and recipient to “account for non-obvious or non-recognizable email addresses or misspellings or other idiosyncrasies.”

• Lastly, of the emails still left over, a “number of terms” were searched, including “Benghazi” and “Libya.”

The results of the searching were that Clinton’s attorneys found 30,490 work-related emails and 31,830 emails that were deemed “private and personal.”

Now, the search terms were negotiated with the State Department and probably reverse-engineered.

The State Department also probably didn’t turn over to the committee everything they wanted.

I’ve never understood the get out of jail free the Clinton’s have ever enjoyed. Clinton should have (yeah, I know, should, would, could all words signaling despair, which is unhealthy, but I claim a contextual exemption here) been stopped out from further progress upstream after he was State Attorney General in Arkansas. He left enough muddy tracks there — from the rape, to the sale of prison blood, the bribery-in-kind that was obvious enough. Sort of Jerry Sandusky sized muddy prints for those as cared to look.

Why didn’t anyone in AUTHORITY look? Back in the days some folks pointed to Mena Airport. And operations South of the Border. Well, I STILL don’t understand why we invaded Panama. Or why the Eugene Hassenfus stuff wasn’t followed up more. I mean by reporter boots on the ground in Central America. Really. I don’t count lightweight pieces on mega data stuff captured by Snowden. As Real Reporting. It isn’t.

An interesting piece. Now we’re all on a diversionary trip way out into the weeds with a bunch of very serious people earnestly discussing search terms and semantics, a twenty first century version of the meaning of “is.” Meaan

“Everything is what was asked for. Period. A local sheriff with some deputies and a couiple of golks from the local Best Buy Geek Sq, a couple ofdeputies

An interesting piece. We’re now on a diversionary trip way out into the weeds with a bunch of serious, earnest folks discussing search terms when what should have been done is a local sheriff with some deputies and folks from the local Best Buy Geek Squad sent to pick up the servers and files. What we now have instead is a twenty first century version of the meaning “is.”
If that sounds petty and trite, it was meant to. If that, or an “official” version of it involving government agents, had taken place as it should have, everything requested would be in hand and serious work could be underway in the back room while the big, shrill discussion on the MSM would be about some Republican congressional committee’s outrageous actions and witch hunt.
Hell, if the “hack” of OPM records is as serious as it’s reported to be, the Chinese know more than the American people and can make Hillary and Bill dance like a couple of marionettes, never mind the entire presidential election cycle. No, they wouldn’t do that.
The whole lousy lot of them is sickening.

The Chinese have always had puppet ties to the Clintons: look up Little Rock Chinese restaurant owner Charlie Trie, bagman middleman, or Mochtar Riady and Indonesian Coal, or John Huang, from Hong Kong, who picked up the connect after Riady went LA — one reason to set up bigger money fund pipes for the Clinton machine (see Maria Hsia). Huang went to jail: conspiracy. Yes there ARE real conspiracies. Indonesian connections may also be a factor in the time of Obama, perhaps the Indonesian’s had a stronger “bond” with Obama.

But the Chinese have a big tent, and even the Bushes have gotten caught in its folds. Uncle Neil Bush caught in a few honey traps. Look that up.

The continuing saga of Mrs. Scum – soon to be humiliated once again by being elbowed out of the way once again.