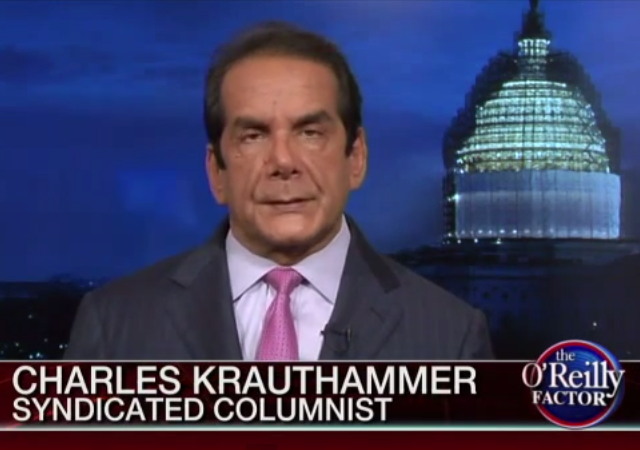 Charles Krauthammer appeared on the O’Reilly Factor last night and was asked by Bill O’Reilly to name three reasons for the recent rapid changes in America, with a focus on recent U.S. Supreme Court cases.

Krauthammer cited culture as one of the reasons and he’s absolutely right. Andrew Breitbart frequently voiced his belief that politics is downstream from culture.

Watch the entire exchange below:

Krauthammer recently called the SCOTUS ruling on gay marriage a loss for democracy.

Krauthammer on Gay Marriage Decision: “Whatever You Think About The Policy, It Is A Huge Loss For A Democracy”

SHANNON BREAM, FOX NEWS: Justice Kennedy said this was, writing for the majority, a constitutional, fundamental right that same-sex couples be allowed to marry.

CHARLES KRAUTHAMMER: Yes, well, that’s what he declared because that was the preference of the five justices. But I think as was convincingly argued by the dissents, and there were many of them, this is an invention — like the invention of the right to abortion. Whatever you believe about the policy for abortion or here for gay rights, the idea that the court should decree that it’s a constitutional right, something that had been hidden in the constitution for over 100 years and that nobody had ever discerned is simply a way of saying that it has been removed from the democratic arena. It can no longer be debated. All the laws are canceled and we are now in a new place.

Ironically, Ruth Bader Ginsburg, who’s on the court today, once said before she ascended to the court that the abortion decision had prevented a stable social settlement of the abortion issue that was headed in the reform direction because it took it out of the political arena. That’s exactly what happened today on gay marriage. Whatever you think about the policy, it is a huge loss for a democracy.

I’m a big Krauthammer fan, but his first explanation for the secularization of our culture is desperately wrong. The apostle Paul had it right a long time ago, and nothing has changed.

“… that which is known about God is evident [m]within them; for God made it evident to them. 20 For since the creation of the world His invisible attributes, His eternal power and divine nature, have been clearly seen, being understood through what has been made, so that they are without excuse. 21 For even though they knew God, they did not honor Him as God or give thanks, but they became futile in their speculations, and their foolish heart was darkened. 22 Professing to be wise, they became fools, 23 and exchanged the glory of the incorruptible God for an image in the form of corruptible man and of birds and four-footed animals and crawling creatures.”

Secularism and it’s materialistic idolatry are not caused by science, they are caused by willful rebellion against God. Darwin is merely a useful hammer.

Kids are no longer raised by their parents, but by the media/ Parents tolerate this. The left controls the media. We tolerate this. We also tolerate there stooges named Boehner, McConnell and Presbus.

We deserve all the misery we get.

It’s not so much tolerating it as being overwhelmed by the technology. It used to be you watched what they watched on TV.

Now they are wired and connected wherever they go and teachers love to politicize their classes.

There is a silver lining; you talk to them and teach them why all this leftist garbage is just that. Compared to the lefty kids who become unquestioning true believers, your kids can develop much sharper cognitive skills.

Like it or not, the decision was a consequence of the democratic process. Breyer and Ginsburg were appointed by Clinton. Kagan and Sotomajor were appointed by Obama. Clinton and Obama were democratically elected. All the credit belongs to “the people”. Thanks, Democrat voters!

Ragspierre:
“An interracial marriage is just a marriage.”

We recognize that now, but historically that was not the case in many jurisdictions in this country – in those jurisdictions interracial were illegal, and were therefore not “marriages” at all. The right to marry out of one’s race had been denied for many decades. So whether it’s permitted now, or was traditionally not permitted in the past, is no standard by which it can be judged a “right” or not. A same-sex marriage is “just a marriage” too; it’s still just two people who have determined to order their personal lives in a manner available to many other “two person” sets by applying for access to an institution sponsored by the state. States aren’t being ordered to allow or recognize same-sex marriage, they’re being told that under the law they have no lawful authority to prevent access to the institution based on sex or sexual orientation. Arguments that the state may discriminate on the basis of sex or sexual orientation are no different from arguments used to supported miscegenation laws.

Frankly, as someone who was in an interracial marriage, I read the arguments about gay marriage, and they are not substantively different from those used to prevent interracial marriage – the Bible, tradition, natural law, state authority to define/limit/prevent, it will damage the institution, what about “the children,” etc. Had I been of a slightly earlier time, these same arguments would have prevented me from marrying the spouse of my choice. And the outrage, the gnashing of teeth, and the predictions of dire consequences (which, in particular, remind me of the Chicken Little brigade of the AGW/climate change bunch) sounds just like that which followed the elimination of the miscegenation laws (and the elimination of segregation laws), none of which came to pass.

The reason a “right” to gay marriage is being “found” now is because until recently, being gay was practically literally a crime. Most “deviant” sex practices were illegal, even for heterosexual married couples. It was not possible for a “right” to gay marriage to be “found” under those circumstance because it was, for practical and legal purposes, impossible for anyone to step forward to assert it. (As it was not possible to “find” a right to interracial marriage in many jurisdictions while slavery was legal – and for some time afterwards in many places.)

“A long history of not thinking a thing wrong, gives it a superficial appearance of being right, and raises at first a formidable outcry in defense of custom.”
Thomas Paine

Correction: first sentence should read, “…in those jurisdictions interracial marriages were illegal, and were therefore not “marriages” at all.”

Correct me if I’m wrong, but the interracial marriage laws that criminalized marriages between different races recognized the validity of those marriages as being marriages, otherwise they wouldn’t have made them subject to criminal sanction. Just like a law making bank robbery illegal requires that the bank robbery has taken place.

That’s different than the SSM dispute. With SSM, it is not that states have criminalized SSMs and prescribed penalties for the act; rather that the states did not recognize the existence of SSM as a form of marriage, and on that basis refused to extent the attendant benefits and obligations of marriage to SSM couples.

Miscegenation laws weren’t about States criminalizing interracial marriages created in other States, they prevented applicants who were not of the same race from becoming married in the States with the laws. When filling out the form to apply for a marriage license, States with miscegenation laws asked for the applicants’ race. If they filled out the form to indicate they were not of the same race, the application was denied. I’m not sure if an interracial marriage created in another State could be, or was, ignored when the couple entered a State with miscegenation laws, but I’ve never read that it was. I imagine no State at the time never thought it could ignore a legal marriage created in another State.

Thanks for clarifying this particular aspect about miscegenation laws; it seems you have looked into this history more closely than I. I still do think the analogy is inexact, but it’s really a moot point at this time. My principal objection to the court ruling was its reliance on creating a new fundamental right under due process jurisprudence.

That is a very good, broad treatment of several of the specious arguments that have been made here.

Andy McCarthy is a MUCH superior Constitutional lawyer to our resident SSM protagonists. Or me.