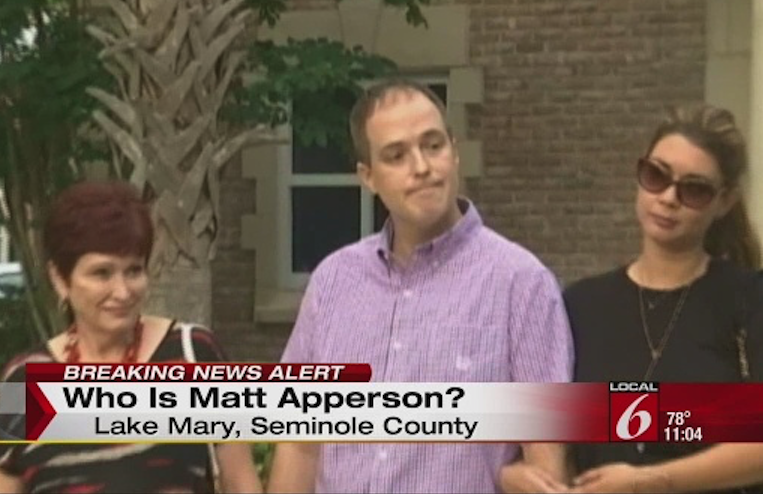 UPDATE:  This post has been updated with a statement from Attorney Mark NeJame, Matthew Apperson’s lawyer.

Matthew Apperson, the man who claims he fired a .357 Magnum bullet at George Zimmerman’s head in purported self-defense, has been arrested by the Lake Mary Police Department (LMPD) following their investigation of the case.

This is according to a press release from the LMPD, embedded below. (Hat tip to commenter “Amy in FL,” and tweeter “@AmyA1A.”)

Zimmerman, you will recall, barely missed being hit by the bullet, and suffered minor injuries from shattered glass when the bullet passed through his car window.

According to that LMPD press release:

After conducting numerous interviews throughout the week, detectives determined that Mr. Apperson did intentionally fire his weapon into the vehicle occupied by George Zimmerman without provocation.

Under Florida’s “10-20-Life” statute, each of those counts carries not only its own sentence, but an additional consecutive sentence of 20 years—so even absent the underlying sentences, Apperson could be facing 60 years prison time on the “10-20-Life” aspects alone.  Given his age, this would essentially amount to a life sentence.

So, once again, some loon attempts to accuse Zimmerman of an act of unwarranted violence, and once again the accusation fall so far short of credibility that the alleged offense is not even pursued by the authorities.

This time—perhaps because Apperson is a male? Or maybe just because he tried to put a bullet into Zimmerman’s noggin’?—the accuser faces existential levels of imprisonment.

More details to follow as we come across them.

Here’s the press release, as promised: 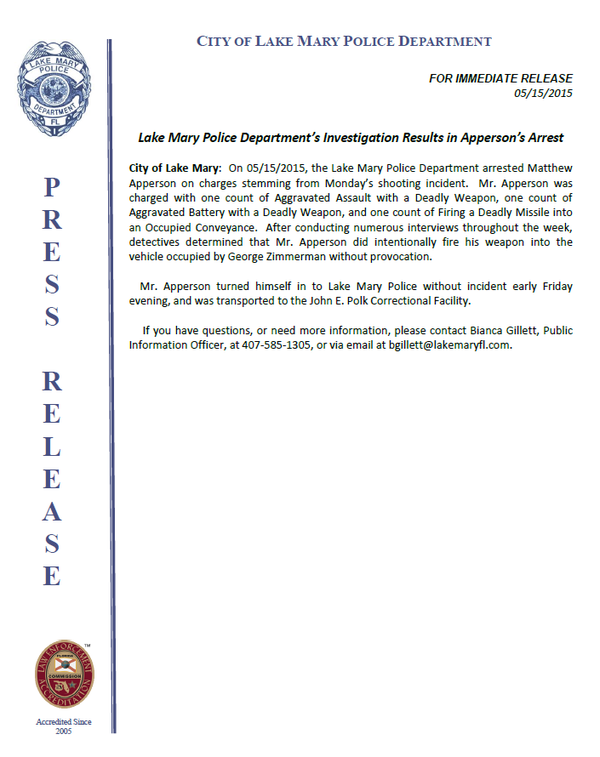 We received word a couple of hours ago from the Lake Mary Police Department that a warrant had been issued for the arrest of Matt Apperson. We immediately scheduled for him to meet with law enforcement so he could be arrested and booked. He has done so. There are 3 counts; Aggravated Battery w a Firearm, Aggravated Assault w a Firearm and Shooting into an occupied vehicle. Bond is set at $35,000 and his release has been arranged.

We expected this as Mr. Apperson, under the advice of counsel and exercising his Constitutional right did not provide additional statements to law enforcement. He had already made statements and this is deemed sufficient, as of now. Mr. Zimmerman apparently did make statements and as such, it appears a decision was made to arrest on the basis of Mr. Zimmerman’s statements. That is neither unusual nor was it unexpected.

The case will proceed through the criminal justice system appropriately and ultimately a determination will be made as what truly happened. Mr. Apperson will continue not to comment until such time as it may be deemed appropriate.

There used to be a “read older comments” button. That disappeared with the last upgrade.