How a movie helped me understand sacrifice

How a movie helped me understand sacrifice 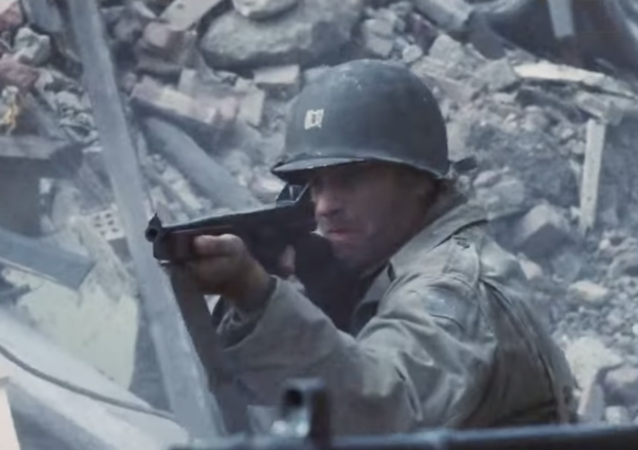 Memorial Day is always a bittersweet holiday for me. I enjoy having a day to partake in BBQ and beer (Texas BBQ though, not what Yanks call “BBQ”), while wearing my favorite, ratty, American flag t-shirt and watching war movies.

As much as I love reflecting on this brilliant country a bunch of old dudes created a couple hundred years ago, there is a weight that lies heavy on my heart on days like Memorial Day. It’s the simple reminder that freedom is never free. Our freedom comes at inestimable price. More often than not, that debt is only satisfied with blood.

When I was in high school “Saving Private Ryan” made its silver screen debut. Always a sucker for war movies, I went to see it on opening weekend. Completely unaware that what I was about to see would have a lasting impact, I sprung for cherry sours, a Coke slushy and found a seat.

The first thirty minutes of the film were unlike anything I’d ever seen on screen and easily the most intense. At the time I was only vaguely familiar with the D-Day invasion. What I knew of D-Day I’d learned from 60s flicks like “The Longest Day.”

Unlike the older World War II films where a bullet to the heart resulted in a theatrical fall sometimes accompanied by a bit of obviously fake blood and famous last words, “Saving Private Ryan” was the goriest movie I’d ever seen. A soldier reached down to pick up his arm that had been blown off and another lay on the ground, his guts strewn across the sand. The water was red with blood and soldier after soldier fell in similarly violent fashion, some never making it off the landing craft.

When the movie was over, the crowd of tear-stained faces shuffled out in a heavy silence. For days I mulled what I’d seen — the pain, horror, and loss that nothing in this life can prepare you for. What was so obviously the terror of war was not what I had ever pictured as war. What I thought I knew about sacrifice and fairness was suddenly irrelevant and juvenile.

Fast forward to my college years. When I had the opportunity to spend time at the University of Caen studying World War II, I leapt at the chance.

I met members of the French Resistance (yes, it existed), visited the memorial cemetery at Omaha Beach as part of a research project on World War II cemeteries — that experience alone was life altering, met with World War II vets, visited just about every war site of significance, and spent time in innumerable tiny war museums littered across the provence. I left with a profound appreciation for what these men and women did for freedom. It changed me.

I doubt, in fact I’m certain I’d never have considered studying World War II if not for “Saving Private Ryan.”

There’s a larger point here: It wasn’t someone preaching freedom at me or telling me evil unchecked can cost the world millions in lives that changed my heart and mind. No one was yelling at me about civic responsibility or how I needed to vote when I was old enough to have the privilege. No one was spouting off political platitudes or lecturing me about how terrible Democratic policies are for the country. No, it was a movie that helped me understand freedom.

When you come to an understanding of the fullness of freedom, the rest falls into place.

If by some chance you haven’t seen “Saving Private Ryan,” add it to your list. It’s essential viewing. And if you have high school aged kids, watch it with them.

On this Memorial Day, may we take a moment to reflect on the fact that freedom is never, ever free.

I just wish the youngsters knew enough to not wish me a happy memorial day.

It is critical to the Left that they NOT be taught the truth about that – and most other things.

The war continues, no matter what anybody says. The battlefield changes and the type of damage done to the fighters changes but the war goes on.

Each of us should spend the rest of his/her life enraging as many commie leftists as we can, in any way we can. I want my enemies to be so disheartened that they regret messing with America and wake up each day wishing they hadn’t.

And that goes for the enemies who were born here as well. To hell with all of ’em.

Good post Kemberlee Kay. Perhaps the ultimate statement on freedom and sacrifice is portrayed in OF GODS AND MEN; it is a different and rare kind of Resistance (and by Frenchmen). But I join in the sincere sentiments to honor the sacrifices made by American men and women sent to serve their country.

Kimberlee – For yet another perspective, watch the movie A Midnight Clear.

Oh, and if some smartass suggests it, give a total pass to Debbie Does Fort Bragg.

Moving. Touching. That’s what art is supposed to do, isn’t it? The moving, graphic portrayal of the events portrayed is probably remarkably accurate but relatively speaking experienced by very, very few; more so perhaps in WWII than since, but still relatively speaking, very, very few. The circumstances of the fight in the bell tower, even more remote.

Don’t despair, Kemberlee, here’s your chance to make a personal sacrifice – enlist. Under thirty five? You can still do it. If you do, the chances of encountering circumstances so artfully portrayed by Spielberg are remote, but available should you choose that path and qualify. Otherwise, there are many things any branch would be glad to have you do for several years.

It might be a bit tough; wordlessly taking directions from someone you would almost certainly believe to be not as smart as you; no explanations; long hours; the heat, cold, aches & pains, bugs, rain, snow; communal living with folks you may not like or understand and having to rely upon them; travel restrictions; durable, functional, but unattractive wardrobe; the list is endless. Almost certainly – no guarantees of course – but almost certainly with little fear of ever encountering the circumstances or conditions portrayed by Spielberg, though, of course, training will expose you to the discomfort and make the threat both less distant and more real.

C’mon, how about it; it’s only for a couple of years, that’s the real sacrifice.

I didn’t think so. Maybe if you lived in Israel?

I really dislike this sort of goading.