Is Obama working toward his promised “civilian national security force”? 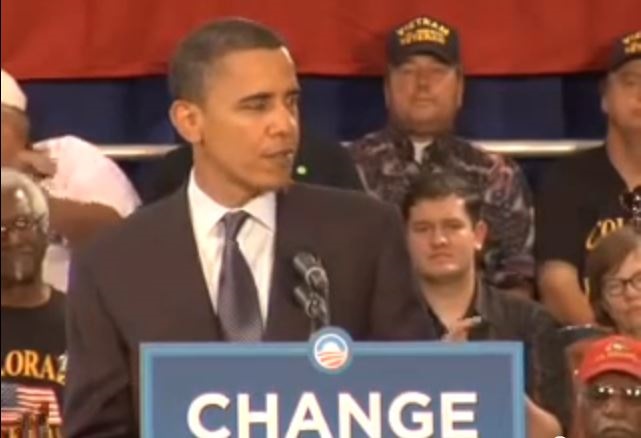 When Al Sharpton called for the nationalization of America’s police forces earlier this month, many were quick to dismiss him as reactionary or even radical.  However, it may be worth revisiting this point in light of the news that the DOJ is going to be spending $20 million in body cams for police.  As Ed Morrissey notes:

This is another step in the de facto nationalization of police forces under the aegis of the DoJ. Milwaukee’s Sheriff David Clarke warned about that earlier in the week, and this is another soft step in that direction. The $20 million pilot program will almost certainly have to expand significantly in order to have an impact, and the DoJ will end up imposing it as a standard through the enforcement of their Civil Rights Division. That erodes the kind of local control that keeps police forces responsive to their own communities, much the same way that the avalanche of mandates from the Department of Education has done to school boards around the country. This is a decision that should be left to states and local communities.

When any entity takes money or resources from the federal government, it automatically becomes subject to regulations, restrictions, mandates, and oversight by the feds.  We see this in education both at the K-12 and the university level, in health care, even in senior centers where residents have been told they cannot pray before meals because their senior center receives federal funding.

It is worrying, then, when the federal government decides to step in and provide body cams for local and state police.  The issue is not whether the cameras are a good idea; people on both sides of the aisle tend to agree that the cams will help resolve questions about police activities quickly, before incidents become inflamed.  The problem is the role of the federal government in local and state policing.  Do we really want a nationalized police force?

And why is Al Sharpton the one out there floating the idea?

It could be, as Politico reported, that Sharpton has become Obama’s “go to man on race” since the Trayvon Martin shooting and the Ferguson riots.  Indeed, according to the Daily Mail, Obama met with Sharpton and with his cabinet, in December of last year, to discuss a much broader (and more expensive) agenda for the militarization of the nation’s police: a $263 million plan that included outfitting police not only with body cams but military equipment and training.

Sharpton’s role in the Obama presidency is not fully understood, in no small part because our media traded their role as watch dog for lap dog,  but he has logged, as of last December, 61 visits to the White House.  Even Juan Williams is amazed that Sharpton is “in with the President of the United States”:

It’s certainly noteworthy that Sharpton is “in” with Obama, and it makes his announcement that we need to federalize the nation’s police carry all the more weight.

The latest announcement by the DOJ prompted me to go back and listen again to Obama’s 2008 speech in which he declared that “We cannot continue to rely only on our military in order to achieve the national security objectives that we’ve set.   We’ve got to have a civilian national security force that’s just as powerful, just as strong, just as well-funded” (at 16:43).

There was a lot of speculation about what he might have meant by that, though not a lot of follow-up by members of the press, and eventually, many people seemed to forget that he promised to establish a “civilian national security force” equal to our military.

I wonder if it’s possible, with the increasing federal involvement in local and state police, that we’re seeing yet another fundamental transformation begin to take shape as state and local police come under the federal umbrella?