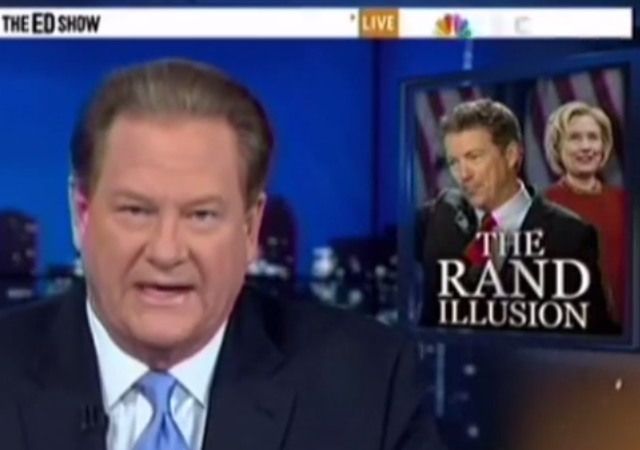 The Republican “War on Women” isn’t over and if liberals have their way, it never will be.

Newly announced presidential candidate Rand Paul appeared on the Today Show yesterday morning and had the nerve to push back when Savannah Guthrie put words in his mouth.

Sen. Rand Paul clashed with “Today” show host Savannah Guthrie over her line of questioning during an interview Wednesday morning, criticizing her for editorializing over perceived changes in his political views since his election to the Senate.

“You have had views on foreign policy in the past that were somewhat unorthodox, but you seem to have changed over the years,” Guthrie told the Kentucky Republican, who was appearing via satellite from Nashua, New Hampshire. “You once said Iran was not a threat, now you say it is. You once proposed ending foreign aid to Israel, now you support it, at least for the time being, and you once offered to drastically cut … defense spending.”

MSNBC’s Ed Schultz, who once referred to conservative talk radio host Laura Ingraham as a “right wing slut” is just beside himself over all this misogyny:

This is how the story begins but it doesn’t end there.

Behold the creation of a narrative.

Republicans have to start treating members of the press like Democratic opponents.

Back in February, Professor Jacobson proposed Three Questions All Democrats Must Answer.

Ace of Spades has a few new ones.

Don’t hold your breath waiting for our totally unbiased media to ask them.

I do — my lip prints are all over the TV screen, along with drool marks. Please don’t tell my wife.

But seriously, I saw that segment last night, and she was correct in her warning that Paul has called down the fire on himself and his campaign. It’s gonna be a long 17 months for him because the entire cabal of towel boys(and girls) in the liberal bordello is gonna be out to strip his hide right off. I hope he can figure out a way to finesse his way through it and gets some good advice because he’s gonna need it. The clowns who gave Obama a pass for the last six years are going to suddenly rediscover their — hah journalistic credentials.

Talk about swimming with the sharks!