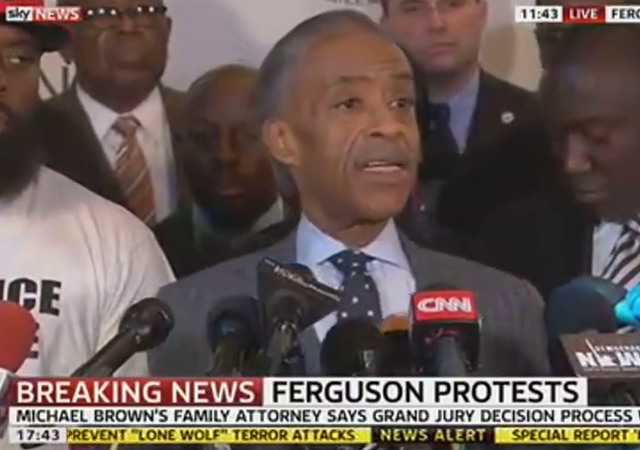 I would imagine the toughest thing about doing business with Al Sharpton is asking him for a lost receipt, but the National Legal and Policy Center is asking NASCAR to end its relationship with him over Ferguson.

Alana Goodman of the Washington Free Beacon has the story:

Watchdog Calls on NASCAR to End Funding to Al Sharpton

A government watchdog group is calling on NASCAR to cut ties with Rev. Al Sharpton’s National Action Network in response to the cable news host’s comments about police in the wake of the shooting of Mike Brown in Ferguson, Mo., and the questionable financial activities at his nonprofit groups.

The National Legal and Policy Center (NLPC) asked NASCAR to “end its financial support of Al Sharpton and his organization” in a letter to CEO Brian France on Monday. NASCAR has previously been a sponsor of NAN’s annual conference, a key fundraising event for Sharpton’s group, according to the NLPC.

Sharpton has been a regular presence in Ferguson.

He even held a press conference after the grand jury decision in November.

Now that we know “hands up, don’t shoot” was a lie, Al Sharpton won’t be the only person called to task.

Good grief! Why on earth would NASCAR be supporting this slimeball in the first place?

“That’s a nice little sport you got there. Be a shame if anything should happen to it…”

Look, everybody knows that NASCAR is about the whitest sport there is (although there are many fans of color). Name the last Black NASCAR driver without using Google. See what I mean?

Bill France made a deal with the devil years ago to pay off Sharpton’s National Action Network (NAN) and to let lily white NASCAR continue the generally Southern sport of racing without demands for “diversity.”

Hey. I’m a redneck. I know what I’m talkin bout.

As soon as the fan base realizes Nascar is paying off Sharpton, it will end.

If NASCAR thinks it a good idea to align itself with scum like this, you know what: do something else on the weekends besides waste your time watching NASCAR brats drive around in circles.