Media distorts Bibi’s statements, then claims he’s walking them back

Media distorts Bibi’s statements, then claims he’s walking them back

Obama admin threats to teach Israel a lesson based on distortion. 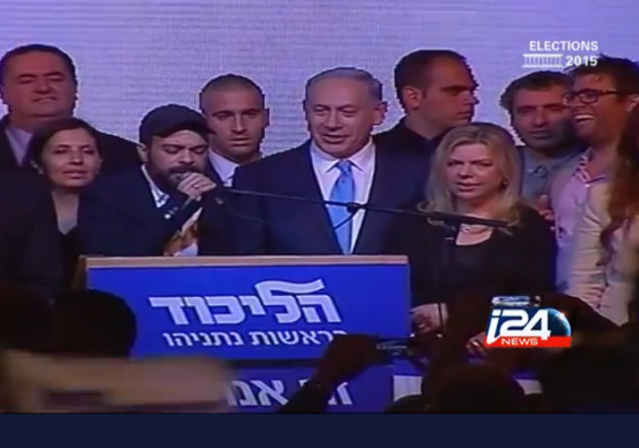 The distortion of Benjamin Netanyahu’s pre-election statements on a two-state solution and Arab voting was a classic Obama and media distortion.

If you take the actual text of Netanyahu said, he never ruled out a two-state solution and never discouraged Arab voting. But those were the headlines and the foaming-at-the mouth hyperbole, fomented by the Obama administration in numerous anonymous statements to the media.

Schmuel Rosner has the analysis, from earlier today, Is Obama getting ready to throw Israel under a UN bus?:

Prime Minister Netanyahu has no “newly declared opposition to a Palestinian state”. If the White House wants to use a badly framed statement by Netanyahu as an excuse for a change in American policy – if it wants, as the WH hinted, to “turn to the U.N. to help force a deal” with the Palestinians on Israel – it should not come as a great surprise. But Netanyahu’s words are the excuse, not the reason, for the change. The reason is Netanyahu’s victory and the administrations’ vindictive mood toward him and toward the country that elected him….

Netanyahu said a couple of regrettable things in the last, desperate days of his brilliant campaign. …

The second statement was just a poor call for action for the right-wing voters. Netanyahu’s record when it comes to policies aimed at integrating Arab Israelis into society is not bad.

The first statement was merely an assessment of the situation. Netanyahu did not say that he opposes the two state solution – he said that under current circumstances he doesn’t see a Palestinian State established in his coming term as Prime Minister. And he is probably right in this assessment.

The Times of Israel reports on an interview Netanyahu gave today, in which he explained that nothing had changed:

“I haven’t changed my policy,” Netanyahu insisted. “I never retracted my speech at Bar-Ilan University six years ago calling for a demilitarized Palestinian state that recognizes a Jewish state.”

“What has changed is the reality,” he continued. “[Palestinian Authority President Mahmoud Abbas] the Palestinian leader refuses to recognize the Jewish state and has made a pact with Hamas that calls for the destruction of the Jewish state, and every territory that is vacated today in the Middle East is taken up by Islamist forces. We want that to change so that we can realize a vision of real, sustained peace. I don’t want a one-state solution. I want a sustainable, peaceful two-state solution, but for that, circumstances have to change.” …

The prime minister also dismissed allegations that he was a racist following comments about high Arab voter turnout during the election, defending his record in reaching out to the Arab community. “I will continue to do that – in my government – to have real integration of Arab citizens of Israel into the Israeli economy, Israeli high-tech, and Israeli society. My commitment is real and it will stay real.”

Completely consistent with a fair analysis of what Netanyahu actually said pre-election.

Yet the same media that distorted Netanyahu’s pre-election statements is portraying it as backtracking. The NY Times reports, Israel’s Netanyahu, Softening Pre-Election Statement, Reopens Door to Palestinian State. Yet in its article, the Times quotes Bibi’s statement on a two-state solution that is completely consistent with his interview today:

“If you are prime minister, a Palestinian state will not be established?”

“I think that anyone who is going to establish a Palestinian state today and evacuate lands is giving attack grounds to the radical Islam against the State of Israel,” Mr. Netanyahu told the news site, NRG. “Anyone who ignores this is sticking his head in the sand.”

CNN calls it a flip-flop, while Christopher Hayes called it a “disingenuous walk back”: 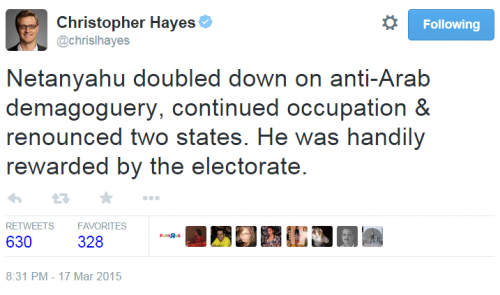 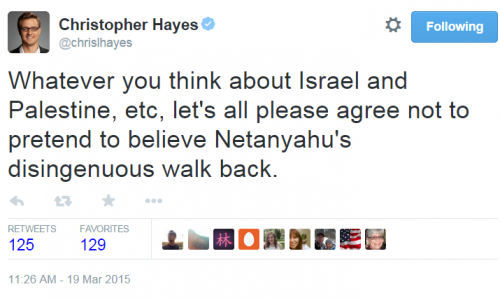 The only ones walking anything back are those who distorted reality in the first place.

UPDATE: No real surprise here, the Obama admin says no matter what Netanyahu now says, it will reevaluate U.N. position.

The administration upset was fake and contrived all along, just an excuse to bring Israel to its knees to ram through Obama’s vision of a Middle East solution that drives Israel back to the 1949 armistice lines with minor adjustments at best — you know, never let a crisis go to waste.

Despite attempts by Prime Minister Benjamin Netanyahu to clarify comments made during his election campaign that a Palestinian state would not emerge under his tenure, the White House will nevertheless “still evaluate” its policy on the Middle East peace process, Press Secretary Josh Earnest told reporters on Thursday….

The prime minister’s comments, he said, call into question his commitment to the pursuit of peace and have forced the US government to reassess the the government’s stance….

“Certainly, the prime minister’s comments from a few days ago called into question his commitment to that,” State Department spokeswoman Jen Psaki said on Thursday.

“We believe he changed his position,” she continued. “We can’t forget about those comments.”

But somehow, the administration forgets Obama’s own comments on keeping Jerusalem the undivided capital of Israel:

Do you know how much better Bibi did in this election when compared to last time? Last time he cobbled together the Likud to Avigdor Lieberman’s party. 23 seats plus something? This time Bibi and Likud got 31 seats. That means 31 people on their list made it into their Knesset.

While Herzog, in the opposition collected only 24 seats. And, he ran with Livni’s party, TOGETHER!

Also, now that the media lied about a “close election,” what do you think results? Fair play? Trust? Or the same old garbage, propaganda? And, Israelis can do this in a variety of languages! Besides, Hebrew, English, and Russian.

Especially when you take into account those allies of his that are in the parties with smaller representation. If anything he will have an easier time forming a government than last time.

This from President “The WORLD drew a red line.”

This from President “Not a smidgen of corruption.”

This from President “Al-Qaeda is on the run/decimated.”

This from President “The war on terror is over.”

This from President “ISIS is a jayvee team.”

This from President “Most transparent administration ever.”

We’re supposed to believe Obama and not believe Bibi?

Obama is to Israel as Hitler was to Poland. He’s doing his best to foment an incident. The only difference is Obama doesn’t want to invade and occupy half of Israel, he’s willing to let his Islamist allies to have the whole thing.