Even DOJ Admits: “Hands Up, Don’t Shoot” An Utter Lie

Even DOJ Admits: “Hands Up, Don’t Shoot” An Utter Lie 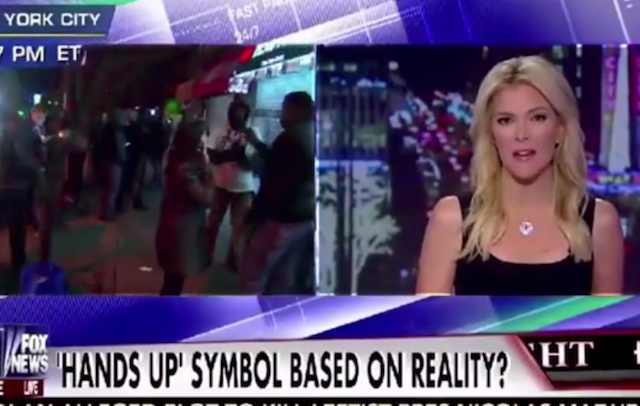 Perhaps the single most potent piece of political theatre to emerge from the Ferguson MO shooting of Mike Brown by Police Officer Darren Wilson was the meme of “Hands Up, Don’t Shoot.” The “Hands Up, Don’t Shoot” meme was based on the false claim by Dorian Johnson that Brown had his hands raised in surrender when Wilson shot him.  A handful of other purported witnesses–none of whom were ultimately deemed sufficiently credible to warrant either criminal or civil rights charges against Wilson–soon parroted the claim.

Protestors were quick to adopt the meme en masse, gesticulating with their hands above their shoulders while chanting the phrase.  Even US Congressmen speaking in the House chamber prominently mimicked the same motions: 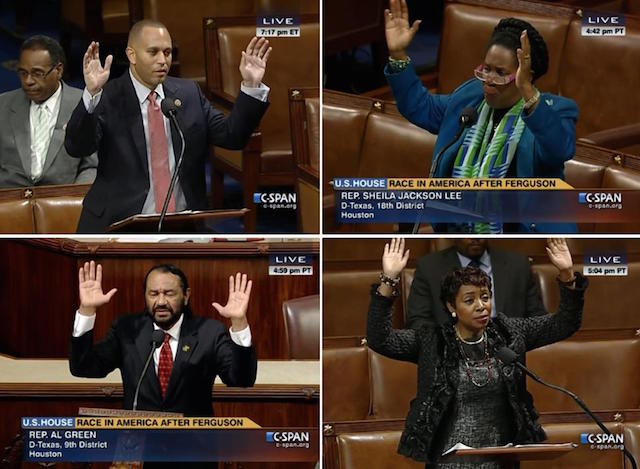 Indeed, there was even an amateurish movie centered on this meme, appropriately titled “The Movie: Hands Up, Don’t Shoot.”  Here’s a taste of the movie’s credulous depiction of the hilariously fabricated “witness statements” on which this false meme was based, and the manner in which the meme nevertheless dominated the public consciousness of the shooting:

Now, from no lesser authority than the United States Department of Justice, we know for a certainty that it was a lie from start to end, as noted by Fox News anchor Megyn Kelly. Particularly amusing is the retrograde effort of the liberal guest to claim that Ferguson was never really about “Hands up, don’t shoot” and Wilson’s shooting of Brown, but rather were over allegations that the Ferguson Police Department in general (not Wilson in particular, nor in his interaction with Brown) was racist:

Of course, we didn’t actually need the DOJ report to debunk the “Hands Up, Don’t Shoot” lie, as anyone who bothered to fairly consider the evidence knew it was all nonsense the moment the witness statements from the Grand Jury proceeding were released in late November.  For evidence of this, we need look no further than Megyn Kelly once again, this time in a broadcast from way back on December 3, 2014:

Fortunately for Wilson, a great many other witnesses described how an enraged 300-lb Brown, after attacking Wilson and getting shot in the hand attempting to grab the officer’s service pistol, refused to comply with Wilson’s lawful efforts to place him under arrest, lowered his head, and charged at Wilson’s drawn pistol.

This narrative of Brown as the aggressor and Wilson as the lawful defender was fully supported by the forensic evidence, in sharp contrast to the “hands up” narrative which lacked any forensic support whatever.

The DOJ report (embedded in our earlier post Darren Wilson Cleared by DOJ of Civil Rights Violations ) particularly noted the lack of credible evidence for the “Hands Up, Don’t Shoot” meme (page 8):

Although there are several individuals who have stated that Brown held his hands up in an unambiguous sign of surrender prior to Wilson shooting him dead, their accounts do not support a prosecution of Wilson. As detailed throughout this report, some of those accounts are inaccurate because they are inconsistent with the physical and forensic evidence; some of those accounts are materially inconsistent with that witness’s own prior statements with no explanation, credible for otherwise, as to why those accounts changed over time. Certain other witnesses who originally stated Brown had his hands up in surrender recanted their original accounts, admitting that they did not witness the shooting or parts of it, despite what they initially reported either to federal or local law enforcement or to the media. Prosecutors did not rely on those accounts when making a prosecutive decision.

While credible witnesses gave varying accounts of exactly what Brown was doing with his hands as he moved toward Wilson – i.e., balling them, holding them out, or pulling up his pants up – and varying accounts of how he was moving – i.e., “charging,” moving in “slow motion,” or “running” – they all establish that Brown was moving toward Wilson when Wilson shot him. Although some witnesses state that Brown held his hands up at shoulder level with his palms facing outward for a brief moment, these same witnesses describe Brown then dropping his hands and “charging” at Wilson.

The report also noted the complete inadequacy of evidence necessary and appropriate to bring charges of any sort against Darren Wilson under the American standards of jurisprudence  (page 10):

Applying the well-established controlling legal authority, including binding precedent from the United States Supreme Court and Eighth Circuit Court of Appeals, the evidence does not establish that it was unreasonable for Wilson to perceive Brown as a threat while Brown was punching and grabbing him in the SUV and attempting to take his gun. Thereafter, when Brown started to flee, Wilson was aware that Brown had attempted to take his gun and suspected that Brown might have been part of a theft a few minutes before. Under the law, it was not unreasonable for Wilson to perceive that Brown posed a threat of serious physical harm, either to him or to others. When Brown turned around and moved toward Wilson, the applicable law and evidence do not support finding that Wilson was unreasonable in his fear that Brown would once again attempt to harm him and gain control of his gun. There are no credible witness accounts that state that Brown was clearly attempting to surrender when Wilson shot him. As detailed throughout this report, those witnesses who say so have given accounts that could not be relied upon in a prosecution because they are irreconcilable with the physical evidence, inconsistent with the credible accounts of other eyewitnesses, inconsistent with the witness’s own prior statements, or in some instances, because the witnesses have acknowledged that their initial accounts were untrue.

Of course, let us not forget the icing on the cake:  Mike Brown’s mother is still facing criminal charges for her alleged attack upon another Brown relative who was selling memorabilia of the shooting from the side of the road:  Report: Mike Brown’s Mother Facing Potential Robbery Charges in #Ferguson

Did anyone catch the NYT headline on this?

The online edition has the reasonable: “Ferguson Report Puts ‘Hands Up’ to Reality Test”

That’s right. Nothing to see here. No conclusion for reasonable, nonpartisan folks like us to reach from this. Pay no attention to the facts behind the curtain.

I feel the need to point out that the youtube video of that “Hands Up, Don’t shoot!” movie, which is about 14 minutes long, actually winds up rebutting the idea that Michael Brown had his hands up in surrender mode when he was shot – it takes a while to get there, but towards the end, they actually do say that. I am guessing that most viewers don’t watch it until the end.