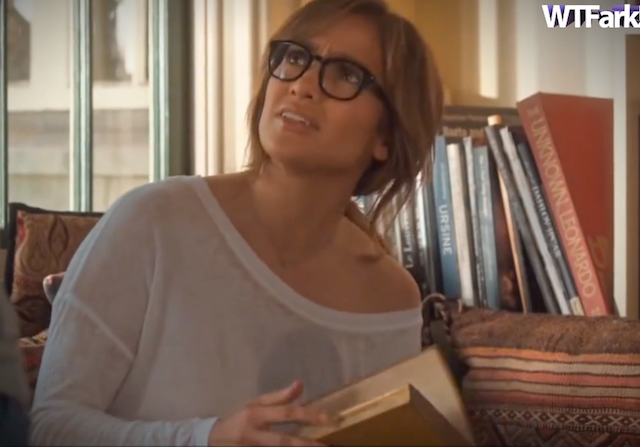 In 2015’s America, no one expects greatness from a romantic thriller starring Jennifer Lopez; but every once in a while, something makes its way into the genre that is so incredibly ridiculous we can’t help but serve it up for censure and recriminations.

Lopez’s latest flick, “The Boy Next Door,” has all the makings of a movie I’ll eventually catch on Netflix after a glass of wine or two:

When a handsome, charming teenager named Noah (Ryan Guzman) moves in next door, newly separated high-school teacher Claire Peterson (Jennifer Lopez) encourages his friendship and engages in a little bit of harmless — or so she thinks — flirtation. Although Noah spends much of the time hanging out with Claire’s son, the teen’s attraction to her is palpable. One night, Claire gives in to temptation and lets Noah seduce her — but when she tries to end the relationship, he turns violent.

Obviously ridiculous—but internet snarkfest WTFark found something tucked into the many layers of this catastrophe that takes us beyond “ridiculous” and into the realm of “America is over.”

Oh my god is right. As in, “oh my God, we are literally doomed.”

The internet lost it:

@EWErickson I have to show you my first edition Torah sometime. Found it in a dumpster one day.

@EWErickson @instapundit what they don't show you is the time machine and the room where they have Homer chained to a desk.

I’ll leave it to the comments to decide whether or not we need to publish a review of this cinematic gem.

(Holy crap! “Literarily” did not trip the spell checker! It saw this coming!)

I sense the presence of Bill S. Preston, Esq. and Theodore Logan.

“Although Noah spends much of the time hanging out with Claire’s son, the teen’s attraction to her is palpable. One night, Claire gives in to temptation and lets Noah seduce her — but when she tries to end the relationship, he turns violent.”……

Is this where Instapundit steps in with something snarky about JLo promoting sexual exploitation of young boys by adult women? because if you put the same movie together and replaced JLo with Brad Pitt having an affair with his daughter’s manipulative friend – the main character would be arrested and publicly crucified.

I know we were mocking the ignorance of the writers – but it just seemed like the plot itself did a fine job at pointing out what idiots they were.

The thing I find more interesting is the teacher/young man plot line. Is this an attempt to explain away all the teacher peccadilloes?