#ChapelHillShooting: What we know so far

#ChapelHillShooting: What we know so far 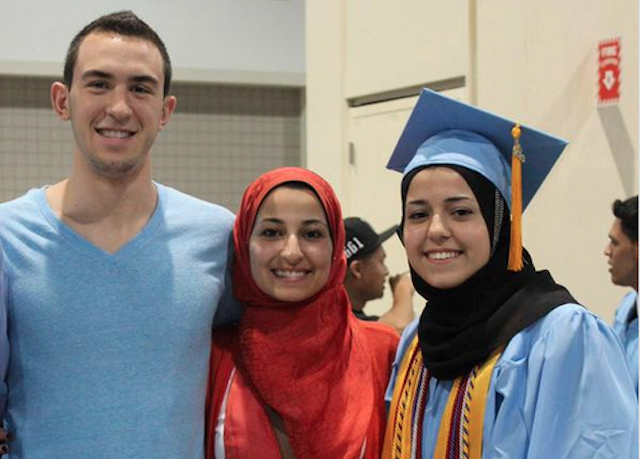 We’re still unclear as to why Hicks chose to gun down three people, but there are multiple reports floating around that the shooting was an escalation of an ordinary neighborhood parking dispute.

The Chapel Hill Police Department said Wednesday morning that initial indications suggested that the issue stemmed from a parking altercation.

“Our preliminary investigation indicates that the crime was motivated by an ongoing neighbor dispute over parking,” the department said in a statement. “Hicks is cooperating with investigators and more information may be released at a later time.”
…
[Note: he was not released.]
…

Ibrahim Hooper, communications director for CAIR, said Wednesday morning he had heard some “unsubstantiated reports” from community members that the victims had previous interactions with Hicks, including a dispute about a parking spot.

CAIR says it…but neighbors also told the police that a parking dispute was part of the problem between Hicks and his victims. Bottom line is, we don’t know yet. Hicks’ appearance in court was extremely brief.

Friends of the three victims have set up a “Our Three Winners” Facebook Memorial dedicated to telling the stories of Deah, Yusor, and Razan.

Meanwhile on Twitter, the #MuslimLivesMatter hashtag has exploded, sparking serious debate (sans any new information) not only about the nature of the crime at hand, but about how people of other religions (or no religion at all) react when Muslims are killed:

I say #MuslimLivesMatter because they should. But the sad fact is, to most of the world, they don't. How many Iraq war victims can YOU name?

Stop with the #MuslimLivesMatter hashtag. Muslim lives only matter when they are being killed by people who aren't Muslim.

Even if it's hard to understand but #MuslimLivesMatter
#iMatter

Militant atheist vs. three Muslims? I think it’s a fair question to ask:

On Mr. Hicks’s Facebook page, he describes himself as a former auto parts dealer who has studied to be a paralegal, and he appears to be an ardent critic of religion. He expressed support for groups like Atheists for Equality, and the Freedom from Religion Foundation.

Last month, he posted a photo that says, “Praying is pointless, useless, narcissistic, arrogant, and lazy; just like the imaginary god you pray to.”

He also posted a photo of what he said was his .38-caliber, five-shot revolver.

At any rate, it looks like the police officers responsible for the investigation are doing their jobs:

The three victims, one man and two women, were Muslims of Arab descent, and photos on Facebook show the two women wearing head scarves, leading to speculation on Twitter and Facebook, much of it with the hashtag #muslimlivesmatter, that the killings might have been a hate crime.

But a statement released by the Chapel Hill police said, “Our preliminary investigation indicates that the crime was motivated by an ongoing neighbor dispute over parking,” adding that the man arrested, Craig Stephen Hicks, was “cooperating with investigators.”

The Chapel Hill police chief, Chris Blue, however, acknowledged the speculation about a possible hate crime. “We understand the concerns about the possibility that this was hate-motivated,” Chief Blue said in a statement, “and we will exhaust every lead to determine if that is the case.”

Durham district attorney Roger Echols wouldn’t speak to reporters about a possible motive, saying that the facts were still under investigation. Additionally, the U.S. Attorney’s office serving the area has not yet released a statement regarding the involvement of federal prosecutors, or the possibility of hate crime charges.

Bottom line? We don’t know more than we do know. We’ll keep you posted as the investigation progresses.

Oh, and also, #AllLivesMatter. Pray for this community.

Principled tolerance, not selective exclusion. Pro-choice morality has come back to bite them. It always does.

That said, make life, not abortion.

As is usual, any detail released in the first 72 hours is wrong. Sit back, calm down, and wait.

There may not be much more about motive for quite some time. He’s been assigned a public defender.

Neighbors who have been interviewed say the shooter was always angry about something. They didn’t expect him to shoot anyone, but when they heard about it, they weren’t surprised to hear it was Hicks.

These kids graduated from local high schools as very good students and were good students in college also. Just look at their faces. There’s no good reason for a 46-year-old, atheist or otherwise, to be shooting all three in the head.

One bit of misinformation I have noticed is the reference to the shooting taking place in “Chapel Hill” on the
“Campus” of UNC-CH. Finley Forest Condominiums are located just across the Orange County line in Durham County, NC.

For this reason, the trial should take place where the crime was committed in Durham, not in Chapel Hill.

Hicks was being held in the Durham County jail before being transferred to the state prison in Raleigh for unspecified reasons. So yes, his trial will be in Durham. The area is just east of the UNC campus, a new and fairly upscale apartment/condo development inhabited heavily by UNC grad students, which is why people are talking about it as “Chapel Hill.”

Central Prison in Raleigh has a decent psychiatric unit. He’s probably going to be evaluated there. It is also far more secure than Durham Co jail. Black muslims will be out to score cell block points for caving his skull in if they get a chance.