This is what some people want democracy to look like. 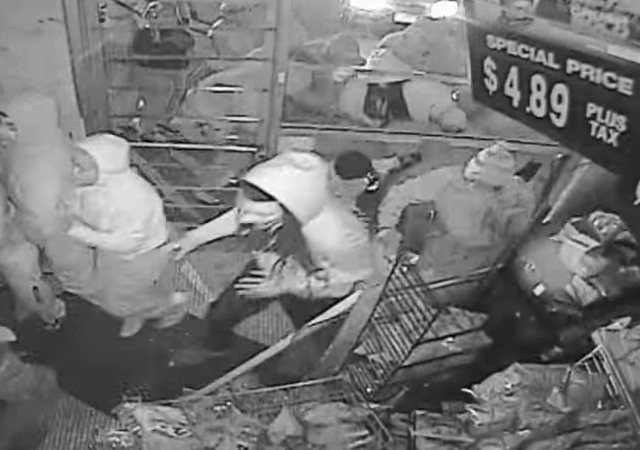 A newly released video shows a mob of Ferguson protesters breaking into and looting a small grocery store in the nearby town of Dellwood.

The store has been looted multiple times and in December, the owner said he might close his business.

As you watch this, you might find yourself wondering: What does this have to do with justice for Michael Brown? The answer is nothing.

This is just a mob urged on, at least indirectly, by liberal political rhetoric of class and race warfare.

No audio is needed but if you get bored watching them try to break in through the door, just skip to the 2:20 mark to see them break the wall down instead. What a classy way to honor Michael Brown’s memory.

As I mentioned, this is a new video and police are asking for help from the public in identifying the criminals.

Noah Rothman of Hot Air has more on that:

The surveillance video features a variety of unmasked young men attempting for nearly two-and-a-half minutes to break through a secure door. After repeatedly failing in that task, the industrious rioters simply break down the building’s adjacent wall. The barrier having been removed, a deluge of looters cascade into the store and proceed to nearly empty it of contents in little more than 200 seconds.

Police have purportedly released this video in the hopes that the public would help investigators identify the over 180 looters who ransacked the building. But some are not buying that claim. They say that the release of this video is designed to shape public opinion and frame those who took to the streets to protest the grand jury decision in Ferguson as criminals.

I’m sure Eric Holder will get right on this.

To not have exterminated such a large number, confined to such a small space…..

Just a slight correction, that’s a boarded up window not a wall that they broke through.

It also shows why one needs high capacity magazines for our guns.
Imagine if the society collapses or welfare checks stop, where do you think they’ll go for their food after looting their stores?
They’d be in your neighborhood liberating everything they could and they wouldn’t have a qualm about who they hurt or kill to get your things either.