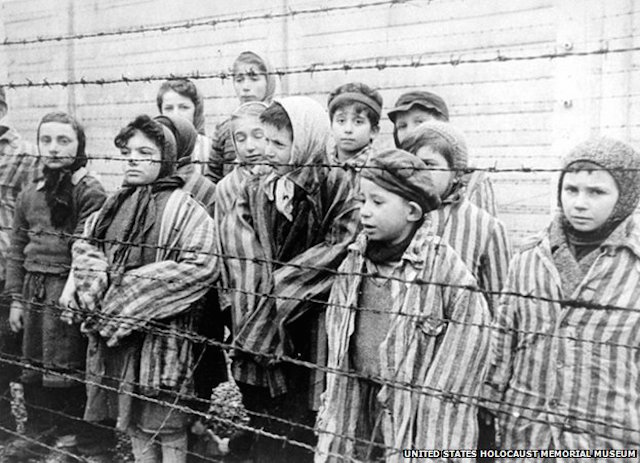 If you walk past the United States Holocaust Museum in Washington, D.C., you’ll see an enormous banner hanging near the entrance. You can’t miss it, whether you’re making your way to darken the building’s doorway, or not. “NEVER AGAIN” is the slogan for their latest educational push and messaging campaign, but it’s also a theme as old as the resistance to hatred, discrimination, and genocide itself.

Today, survivors, activists, and world leaders gathered in Oświęcim, Poland to commemorate the 70th anniversary of the Auschwitz extermination camp, and to once again draw attention to the stark reality of how increasingly dangerous it is to be a Jew in Europe.

“We survivors do not want our past to be our children’s future,” Roman Kent, born in 1929, told a memorial gathering at the death camp’s site in Poland.

Some 300 Auschwitz survivors returned for the ceremony under a giant tent.

Some 1.1 million people, mostly Jews, were killed there between 1940 and 1945, when Soviet troops liberated it.

It is expected to be the last major anniversary event survivors are able to attend in considerable numbers.

Ronald S Lauder, president of the World Jewish Congress, told the commemoration: “Jews are targeted in Europe once again because they are Jews…

“Once again young Jewish boys are afraid to wear yarmulkes [skullcaps] on the streets of Paris, Budapest, London and even Berlin.”

In the Czech capital Prague, speakers of parliament from across the EU gathered with the European Jewish Congress to issue a declaration condemning anti-Semitism and hate crimes.

The conflict between Poland and Russia reared its head at today’s ceremony, with Polish President Bronislaw Komorowski condemning Moscow for moving in on territory in Ukraine, saying, “[l]et’s keep in our minds therefore what outcome is brought about by abuse of peoples’ right of self-determination, disregard for inviolability of borders, human life, and passivity toward evil.”

The right to strong borders and self-determination was one of the first that Hitler chose to violate when he began his initial death march across eastern Europe. By virtually ignoring the sovereignty of countries of Poland and Czechoslovakia, he grew his empire and increased his buying power with other states fortunate enough to have maintained some level of autonomy (at least for the time being.)

It’s possible to draw parallels between what happened in the run up to the second World War, and what’s happening now in Europe, without proving Godwin’s Law. The Third Reich wasn’t built in a day—ask someone who watched Germany spiral over the course of more than two decades—and neither will the next great atrocity. The existence of “no go zones,” or Moscow’s violation of Ukrainian sovereignty, doesn’t automatically force the conclusion that a second Holocaust is imminent; but the fact that survivors of state-sanctioned death camps can stand before the world and draw these comparisons without legitimate criticism shouldn’t just create “cause for concern.” It should terrify you.

“For a time, we thought that the hatred of Jews had finally been eradicated. But slowly the demonization of Jews started to come back,” [World Jewish Congress President Ronald] Lauder said. “Once again, young Jewish boys are afraid to wear yarmulkes on the streets of Paris and Budapest and London. Once again, Jewish businesses are targeted. And once again, Jewish families are fleeing Europe.”

What happened to “never again?”

Desert_Rat45 has the truth of it, but there is another truth.

“Never Again” will be true, not because Europeans and Muslims suddenly see the error of their ways. It will be “Never Again” because the Holocaust was genocide by industrial mass production. Muslims and modern Europeans prefer their genocides to be hands-on and retail, not wholesale. Although the European elites do prefer that it be done retail at one remove so their hands remain clean and they can pontificate about how it is the Jews’ fault.

The only prevention is the sure and certain knowledge that for every Jew killed, at least one attacker will be killed. At a minimum.

Agree with many of your points but the Holocaust did not begin with industrial scale genocide. It didn’t even begin with murdering Jews. The Reich began euthanizing “mental defectives” until Bishop Galen of Münster attacked it from the pulpit. Everything the Reich ultimately did began a little at a time, as a witness said, like the drip of an anesthetic. That is precisely what is happening now.

Bitter amusement can be had by charting the coverage of the Nazi Holocaust in the media during the Cambodian holocaust. You couldn’t turn on PBS without running into another Nazi-Holocaust themed program, for instance, while the New York Times Index for 1978-1984 went from its usual three columns of articles about the Nazi Holocaust to around twenty-one columns. All the while, the West did nothing about Cambodia except to deplore it, and it was left to Communist(!) Vietnam to save what Cambodians were left alive.

Chanting “Never Again” turned out to be an excellent and morally uplifting way of distracting ourselves from the fact that it was happening again.

Agreed. “Never again!” was never just about Jews or any other discernible group in particular.

We can’t let it happen.

Except that we are letting it happen again! It has been happening for years and we haven’t taken any meaningful action to stop it; ask the Kurds, Rwandans, Afghans – the list goes on. Getting out of a comfortable bed after a good night’s sleep, having a good breakfast, dressing in good clothes, and then going to a safe, comfortable building to deliver a strongly worded speech is not taking meaningful action. That is precisely what we have done and it has stopped nothing! Without real action, nothing changes, and our current administration has shown the world that they don’t have the will to do more than talk, and practice Chamberlain-style appeasement.

Genocide will continue, despite any “sharply worded protests” we may make.