Mike Huckabee signing off Fox News … to run for President?

Mike Huckabee signing off Fox News … to run for President?

Considering a run, decision to be made in the spring. 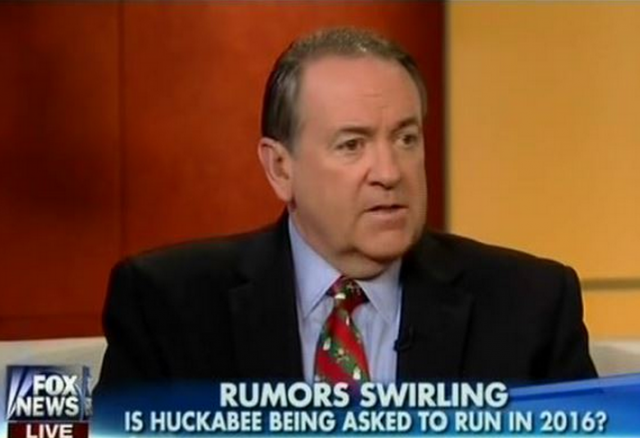 Reports are that tonight will be Mike Huckabee’s last Saturday night show due to some political announcement he’s probably going to be making, if not tonight then soon.

Reports that Governor Mike Huckabee considering running for President in 2016 so tonight is his last show on Fox News http://t.co/0fABz2yh1a

Governor Mike Huckabee will announce tonight on his Fox News show that he is leaving the network after six-and-a-half years as the host of “Huckabee.” To close out his final show, Gov. Huckabee said:

“Tonight I will do more than just say goodnight. I will say goodbye. This is the last edition of ‘Huckabee’ on the Fox News Channel. It’s been the ride of a lifetime, and I have never had so much fun in my life. But I also realize that God hasn’t put me on earth just to have a good time or to make a good living, but rather has put me on earth to try to make a good life.

“There has been a great deal of speculation as to whether I would run for President. If I were willing to absolutely rule that out, I could keep doing this show. But I can’t make such a declaration. I won’t make a decision about running until late in the spring of 2015, but the continued chatter has put Fox News into a position that is not fair to them nor is it possible for me to openly determine political and financial support to justify a race. The honorable thing to do at this point is to end my tenure here at Fox. As much as I have loved doing the show, I cannot bring myself to rule out another Presidential run. So as we say in television, stay tuned!”

So what do you think? Should he run?

I am a life long Arkansan and I say not only NO but HUCK NO! I suffered through his administration here as Governor. Though it would be funny to see him lose his home state, which I firmly believe he would.

I think this is a play by the establishment to put these guys in the race and then have them bow out and throw their support to Jeb.

The hell with it: why doesn’t the GOP just trot out Pat Paulson again?

Are you kidding me? He is exactly what the Republican party does NOT need. A social conservative who is a big government guy. We need the opposite. A socially libertarian who is small government.