Today is Day 1 of the GOP-controlled Congress 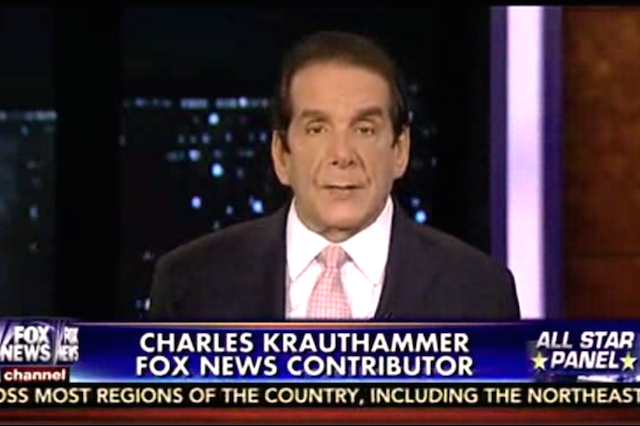 Last night Charles Krauthammer took the outgoing Congressional leadership to task over their legacy of obstructionism.

Via the Daily Caller (emphasis mine):

”It sounds like Schumer is saying that, for the first time in living memory, we’re going to have amendments introduced in the U.S. Senate, which is a remarkable constitutional achievement and it’s because Harry Reid is gone. The grown-ups are now in control of the Congress. This idea that we should be using American oil in America is so idiotic, it’s almost unworthy of talking about. So what we’re going to do is we’re going to use the Canadian oil and if we export it, which we will because we have a surplus, we’re going to substitute gallon by gallon American oil, it makes no sense at all.”

“Look, I think what’s really important here is that Republicans are going to have a chance to show how retroactively for the last six years everything has stopped in the Senate. Democrats stopped it, Harry Reid stopped it and they effectively acted as a shield to make Obama look as if he wasn’t the one stopping stuff. Well now he’s going to be exposed because he’s going to have to exercise the veto. Schumer and the others could prevent a few of the bills from landing on the president’s desk with these ridiculous amendments on Keystone, for example. But I think it will expose them. But the days of hiding under Harry Reid’s desk are over.”

This is important, and it’s not a point that should be ignored by conservatives. Starting today, we’ll be holding accountable not just a newly-minted leadership, but a President who now finds himself in the minority after six comfortable years of playing pen-and-phone politics.

This will not be a perfect session for Republicans. Having a majority doesn’t necessarily translate into getting everything you want all the time; we still have a President who will oppose conservative legislation, and a caucus full of Democrats who, after six years in power, know the rules and how to manipulate them. But as Republicans take control of both chambers of Congress, it’s time for conservatives to do as much as we can to take control of the spin cycle and protect the ball.

I’m not saying we should treat the new Congress with kid gloves, but as the new session begins, we should take time to remember how we felt during the last week of October, when we were running on no sleep while campaigning for new candidates we claimed to believe in. Democrats will be playing defense for the next two years as bill after bill lands on Obama’s desk, and it’s our job to make this as miserable a time for them as possible.

This is not the moment to waste time eating our own. It’s time to pile on the Obamas and Reids of the world who made progress next to impossible, then turned around and blamed Republicans for the terrible policies that did manage to make it into law.

We didn’t stumble upon this majority; we earned it. Let’s make the most of it.

As I recall, wasn’t it mid 2013 that Krauthammer said that Republicans should do nothing to defund Obamacare because Obamacare was going to “fall under its own weight”; ACA hasn’t fallen.

Boehner and McConnell, who now hold total control over Congress, are too fearful to confront Obama’s lawless and illegal immigration and are completely helpless to defund Obamacare are somehow going to have the courage to not continue with the government subsidizing the mass of American mobs who still think they have a right to free government healthcare?

I’ll say this about Krauthammer, he is one funny guy.

We need Jeb Bush to save us! He’s the Man of the People from Greenwich Conn!

Po’ Jeb – and Lizzie Warren too.

They were both born with a “silver foot” in their mouths.

I stopped listening to Krauthammer when he started disrespecting Sarah Palin.

I stopped listening to Krauthammer when he, along with Fred Barnes, came out in support of the McCain/Kennedy Shamnesty bill. It was then I realized that Charles Krauthammer has not really removed himself from his far left beginnings.

What we are going to see is a go along to git along Republican Congress. First floor offices and tony committee assignments saw Republicans, who campaigned on a more conservative Congress if we elected them, go weak in the knees and vote for a man who was so great at funding Obama’s illegal amnesty that he got a personal phone call from POTUS thanking him. Randy Weber (R-Tx) quickly learned that retribution for going against the RINO machine is swift. The ink on todays votes is not even dry and Rep. Weber has had his name removed from his own legislation by our new (same as the old) Speaker of the House.

Don’t believe me? Ask Louie Gohmert. He has not been given a committee assignment since Boehner became Speaker. And while Louie may sound like he comes from the sticks, there are not many smarter. But Louis is not a go along to git along Republican. He is a Constitutionalist and doesn’t mind pointing fingers consequently, he must be punished.

What Boehner is doing is sad, but expected. I’m wondering how he is much different than Pelosi. Did you see the photo of Boehner kissing her on the cheek today. Sickening.

Who isn’t sick of this crap from these corrupt clowns?

Has this guy gone nuts?
Is he going to start singing “John Boehner, mmmm, mmmm, good?”

Methinks he fancies himself an “intellectual” like Barry – the non-publishing Harvard Law Review editor. Snark.

Dr. Krauthammer suffers from the beltway disease as does the rest of the regular Fox panelists. They just can’t see what those of us outside of DC see. The environment around DC and all the politicians really bends reality like a strong gravitational pull. They can’t see it because they’re under the influence of all the trappings of DC culture and pontificating.

I don’t blame them for being soft or Big Government get-a-longs really… they really are swept up in the swirl of it all… they just don’t get it…. can’t see it.

“This is not the moment to waste time eating our own. It’s time to pile on the Obamas and Reids of the world who made progress next to impossible, then turned around and blamed Republicans for the terrible policies that did manage to make it into law.”

Right now, the Repubs have the better position on many issues, which is why they won so many seats away from the Democrats under this administration. Further, they have a truly appealing bouquet of governors who have been enjoying success in implementing the Republican policies, especially the fiscal ones. Some of these policies are bound to be applicable nation-wide. Finally, there is that huge, outstanding issue of how so many of our executive agencies have denied our citizens equal protection under the laws, which will require some pointed oversight by Congress.

Sorry Valerie but there will be no “pointed oversight” by this gang. They just re-elected as leader the guy who gave away their only real weapon – the money.

Unless you can explain to me how they intend to get the judgeared jackass to sign bills that clip his own wings, you really should not entertain any fantasy that it’s going to be different this time. These fools have never heard the tale of the Scorpion and the Frog. Every Israeli knows it by heart.

Oversight is slow, granted. But I remember all the way back to the Vietnam War, and I watched the Abu Ghraib hearings live, and saw how the grownups in this country responded by setting out procedural safeguards and transparency rules that yielded a very different set of results from the Mai Lai incident (and others).

The party that controls only the House of Representatives has limited options. Things have changed, and it is true that the Repubs do not have a veto-proof majority. They do have luck and the better policy arguments on their side, not to mention a Presidential election coming up in 2016. I hope they start by picking the low-hanging fruit, that is, issues where Repub policy arguments have strong, evidence-based arguments.

About those policy arguments, here are two Conservatives can use, from today:

“For a middle-class person, the American dream of a big house with a backyard and a couple of cars is much more achievable in low-tax Arizona than in deep-blue Massachusetts. ”

The argument goes like this: “See how Repub policies in red states help the poor? You can be poor in a Red State, and live well. And, See what the Obama administration policies have done to our kids? We have data. We know we can do better. You don’t always need a &$#^% Rube Goldberg apparatus. Sometimes a few, simple field-leveling rules are all you need.”

That argument is a winner. It can get the Presidency, and keep both Houses of Congress.

“This will not be a perfect session for Republicans. Having a majority doesn’t necessarily translate into getting everything you want all the time;”

‘You’ want. Check, you’re not a conservative. No problem. But you present a straw man argument, unless you can identify conservatives – just one will satisfy – who want everything they want all the time. That is anti-conservative spin language.

“…we still have a President who will oppose conservative legislation, and a caucus full of Democrats who, after six years in power, know the rules and how to manipulate them.”

Thank you. None of us conservatives knew that.

Krauthammer seems to want his bread buttered on both ends and to eat it too.

Not to put too fine a point on it, but: the point is not to have one’s bread and eat it too — anyone can do that and everyone does — the point is to eat one’s bread and have it too. Only the insane want that. Example: the person who wants to buy a Rolex and still have the money they used to buy it in their bank. Or: the person who wants to live their life and still be young. Not a big point, no Armageddon, but an interesting one, IMO.

Good point. I made what I think is a parallel point farther down the comment list just now.

Something is troubling about the tone and assumptions of this post. Several somethings, the one you mention included. The post just strikes me as non-statesmanly. While statesmanship is not about compromise — one does not compromise one’s independence or sovereignty — it is about calm, reticence, a mind hard as diamond, a heart soft as melted butter and an absolute rejection of the honey trap of vengeance, brother Eastwood’s recurring movie theme notwithstanding.