Juggernaut of conservative legislation coming to a state near you

Juggernaut of conservative legislation coming to a state near you

WaPo: Be afraid of Republicans in state governments. Be very afraid. 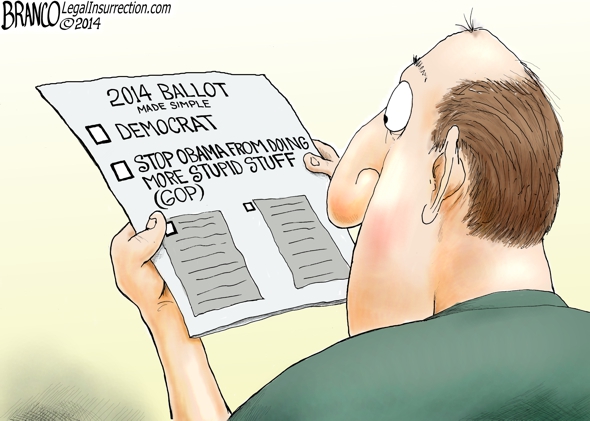 For the last several weeks, we’ve been living in a sort of Twilight Zone episode where many people on the left including Obama and the media haven’t realized how big the midterms were for Republicans.

Reid Wilson of the Washington Post has just begun to notice:

Legislators in the 24 states where Republicans now hold total control plan to push a series of aggressive policy initiatives in the coming year aimed at limiting the power of the federal government and rekindling the culture wars.

The unprecedented breadth of the Republican majority — the party now controls 31 governorships and 68 of 98 partisan legislative chambers — all but guarantees a new tide of conservative laws. Republicans plan to launch a fresh assault on the Common Core education standards, press abortion regulations, cut personal and corporate income taxes and take up dozens of measures challenging the power of labor unions and the Environmental Protection Agency.

Before Election Day, the GOP controlled 59 partisan legislative chambers across the country. The increase to 68 gives Republicans six more chambers than their previous record in the modern era, set after special elections in 2011 and 2012.

Republicans also reduced the number of states where Democrats control both the governor’s office and the legislatures from 13 to seven.

Was the election yesterday? Is this new information about how many Republicans won?

Furthermore, why is it a surprise that Republicans have plans for when they take over?

Wilson goes on to repeat the Democrats’ warning to the GOP against going too far:

Republicans in at least nine states are planning to use their power to pass “right to work” legislation, which would allow employees to opt out of joining a labor union. Twenty-four states already have such laws on the books, and new measures have been or will be proposed in Wisconsin, New Mexico, New Hampshire, Ohio, Colorado, Kentucky, Montana, Pennsylvania and Missouri.

Were the Democrats going “too far” when they passed Obamacare? How about when the Democrats went nuclear on the filibuster? Was that too far?

One needs to vote in every election, starting with the local elections for mayor and council. Make sure that they have the same values as you do and talk with them.

Vote for the people that you want to eventually represent you at the state level and then at the federal level. In many cases, it is name recognition that gets people moving up the ladder.

It is also important to keep the press honest, including bloggers. Point out their errors.

It is also important to keep the press honest, including bloggers. Point out their errors.

Without the monolithic, hard-‘progressive’ press, we wouldn’t be in this situation, stuck with a naïve non-executive President who hasn’t got a clue about history, economics nor foreign policy. That press has carried the Administration’s water and shielded it from almost all serious criticism for six years, and certainly has not provided the public a full spectrum of news.

It took the public six years to see through the Dear Leader propaganda, but it did finally figure out that ‘labor utilization rate’ means that if you liked your 2007 job, you won’t get it back until the real economy (not Mr. Krugman’s parody) comes back.

GOP needs to either fight or get the f**k out of the way of those who will.

GOP pantywaist refrain: “Now, we can’t be engaging in anything controversial, might cost us votes.”

New flash for the GOP establishment: That refrain and your blind adherence to it IS the most controversial thing out there to the base of your own party, ya cowardly dimwits. The GOP has rolled over more than Evel Knievel and Madonna combined.

The unprecedented breadth of the Republican majority — the party now controls 31 governorships and 68 of 98 partisan legislative chambers — all but guarantees a new tide of conservative laws.

Guess what, WaPo – that election was the voice of the people. And despite WaPo’s fervent pursuit of ever-more-progressive big gummint, and its careful shaping of ‘news’ stories to conform to progressive narratives, the people have pretty forcefully rejected that trend in government.

So yes, there’s a tide of laws about to rise and wash away some of the worst deposits of the Obama administration. And WaPo, rejoice! This is democracy in action. We’d like to see your future news stories reflect this happy turn of events, and cheer on the people who’ve staked their votes and their future on THEIR choice of governments.

It remains to be seen whether this tide actually happens. Such tides have been foretold before and nothing came of it.