That time the terrorists won 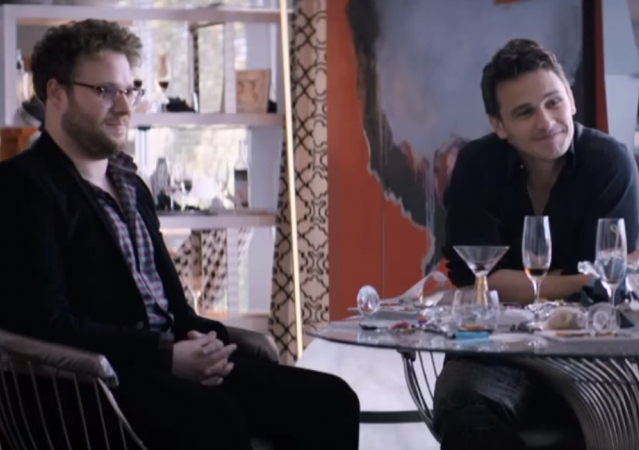 Welcome to the United States of America where cyber terrorists pick what we get to watch while munching on over-priced, tepid pop corn.

You’ve probably heard a bit about The Interview and how a cyber terrorist attack prompted Sony Pictures to cancel plans to release the film on December 25 as originally intended.

Here’s the trailer to The Interview (language and content warning):

According to the New York Times, “American officials have concluded that North Korea was “centrally involved” in the hacking of Sony Picture,” however unlikely that may seem. But as David Auerbach at Slate points out, the hack is indeed cyber terrorism and incredibly concerning.

Alamo Drafthouse Cinema, a fine Texan establishment, is not content to let North Korea, cyber terrorists, or whomever is actually responsible for widespread censorship, off the hook so easily. Not only can you eat chicken tenders, drink beer, and watch a movie in peace and quiet at Alamo Drafthouse (they’re notorious for enforcing their “no cell phones during movies” policy), but you would have been able to watch Team America as a substitute for The Interview.

According to The Hollywood Reporter:

After Sony canceled the release of the North Korea assassination comedy The Interview, a Texas theater said it would swap the film with Paramount’s 2004 film Team America: World Police for one free screening.

“We’re just trying to make the best of an unfortunate situation,” James Wallace, creative manager and programmer at the Alamo Drafthouse Cinema’s Dallas/Fort Worth location, tells The Hollywood Reporter.

American flags and other patriotic items will be given out by theater employees, Wallace says.

The plot of Team America, co-written by South Park creators Trey Parker and Matt Stone, revolves around Kim Jong Il, the father of current North Korean dictator Kim Jong Un. The posters promoting the R-rated movie in 2004 included the tagline, “Putting the ‘F’ Back in Freedom.”

If you’re not familiar with Team America, it’s not for the faint-hearted, but it’s about as anti-PC, “stick it to the commies” a film ever made.

That was the plan at least until this afternoon. For a yet to be disclosed reason, Alamo Drafthouse backed out of their plans to show Team America:

Due to to circumstances beyond our control, the TEAM AMERICA 12/27 screening has been cancelled. We apologize & will provide refunds today.

If Hollywood has taught us anything it’s that Harrison Ford, were he president, would have the best advice in this situation:

The decision to place the feelings of tyrannical dictators and cyber terrorists over our right to be entertained by terrible acting and stoner plots is deplorable to say the least.

I never thought I’d live to see the day that America willingly kowtowed to a dude that once overdosed on cheese. CHEESE.

I suppose new Hollywood didn’t get the “these colors don’t run” memo. You win this round dictators, you win, because apparently, we’re a nation of cowards.

… we’re a nation of cowards.

I know this is a not to the Obama/Holder admin. idiocy, however, IMHO it should correctly read:

… [As long as we have this administration in charge,] we’re a nation of cowards.

I smell a steeeeeenkin’ lawyer. (present company accepted, of course)

I’ll wager that Alamo’s lawyer freaked out when he heard that the company was going to effectively be spitting in Kim Jong Bowl-Cut’s eye!

“excepted” of course… of course!!!

I understand that Paramont has withdrawn the movie from ANY showing.

Of course, there are a bazillion copies in circulation, just not theatrical versions.

I have the DVD. Just let them try to stop me.

To quote the inimitable and irreplaceable Iowahawk:

Dear Hollywood: spare another fucking boast about how “courageous” you are.

I’m both sad and glad.

sad that its happening in this country.

glad that its happening to dbags that hate America as much as Kim Junk fluck face.

Seriously guys, I think Kim Jong-un is having a Barbara Streisand moment. Now I really want to see this movie!

Did anyone for a brief moment even consider that anyone in Hollywood had any spine whatsoever?

Thank goodness they aren’t making fun of that guy with the funny turban from Arabia, his followers actually cut peoples heads off.