Not exactly a new trend.

Surprising absolutely no one, a Pew survey released last month reveals that not only to Americans by and large not trust the government, but that sentiment is nothing new.

As of February of this year, only 24% of Americans said that they trust the government “always” or “most of the time. What’s more, as trust has decreased (dark blue line), distrust has increased (light blue line): 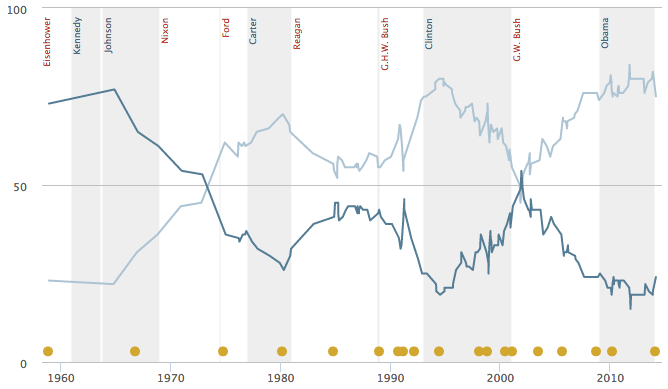 This means that those who don’t explicitly trust the government aren’t just ambivalent about it; we’re looking at active distrust from an electorate who has seen years of infighting, splits, and general intransigence where we should be seeing governance.

When it comes to political parties, the trends are a little less clear; but even trust of the government amongst Democrats has stagnated well below 50%: 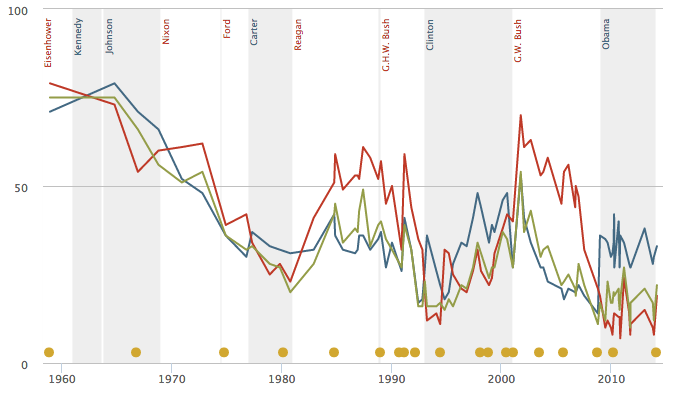 Pew’s data goes back all the way to the 50s during the Kennedy heyday; things went downhill in 1964, and they’ve never recovered. A brief spike in 2001 during the Bush II Administration reached 54%—but that’s still 23 points behind the peak during the early years of the Johnson Administration. What’s interesting (and discouraging) about the trend of decreasing trust is that not even Barack Obama, with his hope and change and groundswell electoral victory, was able to boost numbers above the mid-20% range.

Why is that? Because everything he’s done—even things that progressive memes tell us are wildly smart and popular—has made life harder for the American people:

Barack Obama was from the government, and he was here to help.

The Stimulus Plan was the first “help” the Obama administration and Democrats offered the country. But tens of billions of dollars were wasted on projects that were not – as Obama later admitted – actually shovel ready.

The Stimulus Plan was money in search of a way to spend it, and much of that contrived spending went indirectly to public sector unions by propping up unsustainable state budgets.

We have very little to show for the Stimulus Plan, and even less to show from Obama’s other major domestic initiative, Obamacare.

Obamacare, which still is unpopular and has not gained acceptance in most states which refuse to set up state exchanges, was the Reagan maxim on steroids: “We’re from the government, and we’re here to help whether you like it or not.”

“You can keep your health insurance and doctor if you like them” is what we were told, but just the opposite was true.

Obamacare also forced millions of people in the individual market to give up health insurance plans they liked, and to purchase plans they didn’t want. Or worse, forced them onto Medicaid, where there will be few doctors willing to see them because the reimbursement rates are so low.

The debacle of the Obamacare federal exchange website was just icing on the cake. And through it all, there still will be tens of millions of people without health insurance.

Benghazi. The IRS and VA scandals. Fast and Furious. Not only did people go broke, they got hurt. They died after being attacked by an enemy President Obama assured us all was not a threat.

America in 2008 and 2012 may have loved the idea of Barack Obama, but Pew’s data shows us that he has been no more effective in bringing us “change we can believe in” than anyone else who has had the responsibility of occupying the Oval Office.

To paraphrase Reagan, the worst words and lie one can ever hear is that it is the government that is there to help you.

I believe many Americans can think of even worst words now.

My trust in Pew has also nosedived if they thought a poll was necessary to determine this.

There has not been any reason to trust the Federal government, or either wing of the Governing Party, for at least several decades. They cannot honestly claim good motives, obedience to the Constitution, or even bare competence in running things. They are all power-seeking tyrants.

I for one, completely trust the Gov’t. and especially the IRS. I don’t know anyone here and don’t even know how I accidently got to this website.

It’s WHAT I trust them to do that is the problem, because they never disappoint my expectations.

You also probably don’t know how you got to your reasoning.

You need labels for the graphs so people can understand their meaning.