Harvard Law Review Editor on exam delay request: Our Weakness is Our Strength

Harvard Law Review Editor on exam delay request: Our Weakness is Our Strength

“our nation is starving for a genuine discussion about mental health.” 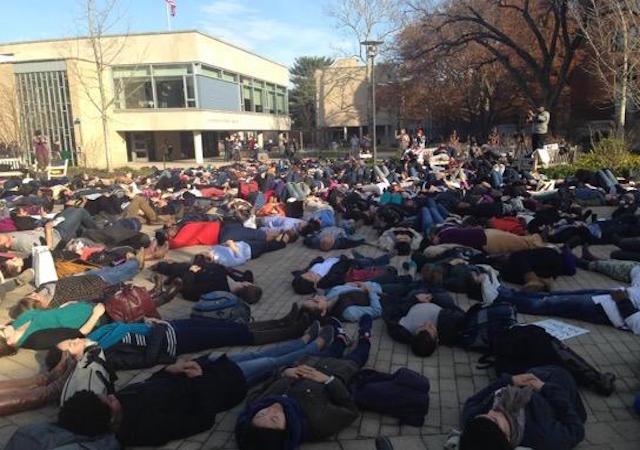 As we reported, a coalition of student groups at Harvard Law School demanded exam delays due to student trauma over the Ferguson and Eric Garner grand jury refusals to indict.

There was withering criticism, including here. HLS refused to budge, but did agree to counseling, meetings, and other steps.

William Desmond, a third year HLS student who also is a Law Review Editor, defends the demand for an exam delay in The National Law Journal, Delaying Exams Is Not a Request from ‘Coddled Millennials’ (h/t Drew M.). Here’s an excerpt:

… In essence, law students are being told to grow up and learn how to focus amidst stress and anxiety—like “real” lawyers must do.

Speaking as one of those law students, I can say that this response is misguided: Our request for exam extensions is not being made from a position of weakness, but rather from one of strength and critical awareness.

Although over the last few weeks many law students have experienced moments of total despair, minutes of inconsolable tears and hours of utter confusion, many of these same students have also spent days in action—days of protesting, of organizing meetings, of drafting emails and letters, and of starting conversations long overdue. We have been synthesizing decades of police interactions, dissecting problems centuries old, and exposing the hypocrisy of silence.

I have seen the psychological trauma brought on by disillusionment with our justice system send some law students into a period of depression…. The hesitancy to recognize the validity of these psychic effects demonstrates that, in addition to conversations on race, gender and class, our nation is starving for a genuine discussion about mental health….

Where some commentators see weakness or sensitivity, perhaps they should instead see strength—the strength to know when our cups of endurance have run over and when the time for patience has ended. Perhaps they should instead see courage—the courage to look our peers in the eyes and uncomfortably ask them to bear these burdens of racism and classism that we have together inherited from generations past. We have taken many exams before, but never have we done this. We are scared, but no longer will we be spectators to injustice.

Our focus and critical thinking are at an all-time peak while the importance of our textbooks is at a low. It is not that law students are incapable of handling their exams. It is that we are unwilling to remove ourselves, even for a few days, from this national conversation….

We recognize that this is a moment for change. If not us, then who? For most of us, we know that if we get lower grades this semester, this cost will have been worth the importance and privilege of joining a national movement to fundamentally reform this country’s approach to law enforcement and criminal justice. But just because we are willing to pay this price does not mean we should have to….

Each year as classes of law students enter and exit our nation’s legal institutions we are told the same thing: You are the future of the law. Well, the future is now.

In my post, It’s their law school and they’ll cry if they want to, I noted that the late Harvard Law Professor Clark Byse reportedly was the model for Professor Kingsfield in The Paper Chase. I should have noted this memory of Prof. Byse from Prof. Orin Kerr:

I visited Professor Byse in his office and asked if he was willing to be interviewed as part of my seminar research. He didn’t know me from Adam, but I explained to him that I was interested in his views of different teaching styles as a student and how his views as a student had influenced his style as a young professsor.

I’ll never forget his response. “As a young professor?!?!”, he proclaimed. “That was 1939!!!! Do you think I can remember all the way back to 1939?!?! Up yours, Buster!!!” After about a second of surprise I burst into laughter. Here was this legendary professor, still obviously quite with it, poking fun at his own age and proclaiming “up yours” to a student he had never seen before. I sensed that it was a test, and I was right: Upon seeing my open laughter, Professor Byse immediately softened and a big smile broke across his face. He asked, “Are you free for lunch sometime? I’d be happy to talk about it.”

About a week later, he and I met for lunch … Byse was somewhat saddened that his rigorous Socratic approach had gone out of style; he thought that being absolutely demanding in class was the best possible way to sharpen the minds of students and teach them how to “think like a lawyer.” He saw it as something like Marine Corps boot camp: very tough, but very tough for a very good reason. He thought it unfortunate that the modern approach was “kinder and gentler,” as he feared that rigor had been sacrificed along the way.

The students demanding exam delays probably would have fallen apart at “Ups yours, Buster!!!” Or filed a complaint.

And they would have missed out.

Any school or professor that surrenders to student tantrums about difficultly ought to lose accreditation.

Of course, I’m of the opinion that over production of lawyers negatively impacts society. I suspect such is the case now, and I’m extremely skeptical of elite Law Schools.

Genuine discussion on mental illness. If an elite law education is anything special, the people taking it either do not have serious mental illness, or they’ve manned up and gotten their problems enough under control to function.

Desmond is either lying, or apparently largely ignorant of both human evil and mental illness. If someone is so ignorant of human tragedies, by the third year of law school no less, that recent events are able to prompt a traumatic realization, they are perhaps so innocent that they could only ever cause harm by practicing law.

We really could use a frank national discussion on mental illness. If for nothing other than beating certain people about the head and shoulders with the fact that recreational drug use does not improve mental health.

“…and of starting conversations long overdue. We have been synthesizing decades of police interactions, dissecting problems centuries old, and exposing the hypocrisy of silence.”

Sounds like the typical Friday night BS-sessions we had 40+ years ago when I was a student. Beer was generally involved.

The threads and traces of postmodernism infecting academia undoes objective reality and tells its adherents that reality is that whatever we perceive and believe it to be, that each of us has our own reality. They take solace in believing science supports this idea, co-opting quantum physics where, on the quantum level, the mere act of observation changes the reality. (They skip over the part about how such quantum effects occur only at the quantum level).

This admixture of tired old philosophies intertwined with pseudoscientific support, all of it tainted by all the illogical biases of self, and the belief that social ends justify radical means, leads to a set of people who are fast losing touch with reality itself. They have mentally cocooned themselves within a fabulist reality made of progressive political idealism.

Ask Darwin what happens to species of primates without spines. Pajama Boy is no longer human. He is a jellyfish.

I agree. I’m pretty sure…

They pick and choose from among scientific findings, acquiring only those which support an already held position and ignoring those which contradict the pre-held position. Not understanding science, they pick wrong. Confirmation bias is primary among other logical fallacies. That is unhinging.

So now you have an intellectually unhinged political bloc to which is added their moral relativity, specifically that the ends justify the means and their desired ends are considered faultless and sancrosanct because they are, well, theirs. Assured of constant issue righteousness, achieving such glorious ends as theirs’ justifies any offense committed seeking them. That is unhinging.

Sorry. I quit heroin cold turkey today and I’m on my 27th cup of coffee.

Somebody or other observed that the hallmark of the Twentieth Century was the resurgence of irrationality.

And if he didn’t I just did…

These precious snowflakes are going to be surprised when they find out that the real world doesn’t give a flying frack about their emotional distress. What a bunch of weenies.

Published early so that I can share. My response to his column