“This was a powder keg just waiting for a match” 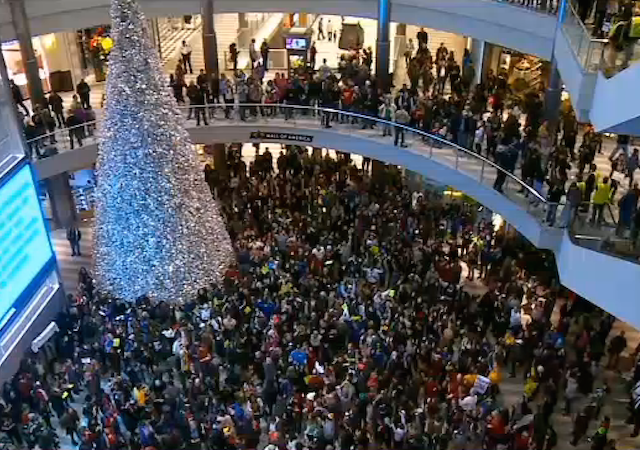 Bloomington City Attorney Sandra Johnson is making moves to hold accountable the organizers of this past Saturday’s “Black Lives Matter” protest at the Mall of America.

Awesome. Mall of America is going to sue the protest puppet masters. http://t.co/xo4v6er0VN

Officers were present on-site, and once the chanting started, moved to close almost 100 stores and several entrances to the mall. I say “moved to” as opposed to “were forced to” because the shutdown occurred as soon as the protests began, and there were no reports of some sort of violent instigating event; but perhaps it’s a good thing the officers moved so quickly, based on how mall employees describe what happened next:

Nate Bash works at one store near the rotunda, which he didn’t want us to name.

“This was a powder keg just waiting for a match,” said Johnson.

Police officers are busy using social media in an attempt to single out the organizers (arresting every single protester would be chaos, and not worth the trouble;) their goal is to target the organizers and participants who encouraged others to come to the mall even after officials made moves to emphasize that the Mall of America is privately owned, and those disrutping business would be asked to leave. Officials don’t yet know how much money was lost during the shutdown, but they’re throwing around words like “staggering,” so I’m willing to assume that losses were well worth the effort to track these people down and file a lawsuit.

As someone who has worked in retail management, I can testify to the importance of not missing a single sale, much less two hour’s worth in the middle of the holiday shopping season. Corporate offices put enormous pressure on their retail slaves to make sales goals, no matter what’s happening outside the store’s entrance.

In this case, I imagine that there are an awful lot of retail managers sitting in tiny offices crunching the numbers and wondering how in the hell they’re going to make up two hours worth of sales in an already crunched and competitive market. Organizers of the protests claim that their goal wasn’t to intimidate or disrupt, but to “sing carols and raise awareness,” and I suppose they achieved their end as far as visibility is concerned. But if Nate’s story (above) is true, it sounds like they didn’t work nearly as hard to let other protesters know the true goals of their protest.

That being said, if you believe that the goal of this protest was meant to be anything other than another high-profile screechfest for the cameras and pundits, I have a sun-drenched beach in Minnesota to sell you.

Nobody is holding a gun to their heads.