Boston Bombing Trial set to be a total circus

Boston Bombing Trial set to be a total circus

This is going to get messy 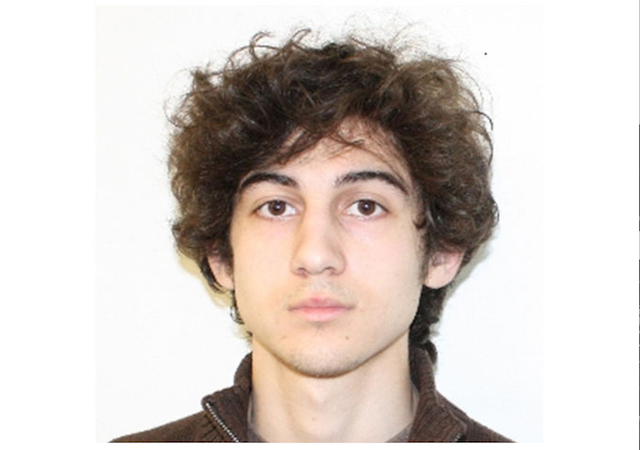 Not so fast. Tsarnaev survived the bombing and ensuing chase, and is now on trial for murder in what might shape up to be one of the most hostile venues in the history of the American legal tradition. (Think that’s hyperbole? Have you ever met someone from Boston? They take Boston seriously.)

U.S. District Judge George O’Toole Jr. has denied Tsarnaev’s attorney’s request to move the trial to a venue less intimate to the vicious crime his client committed, and at the latest hearing, supporters of Tsarnaev came from around the country to demand justice for a man they claim is being framed by the U.S. government.

The outburst came as Tsarnaev seeks to move the Jan. 5 trial to Washington or New York from Boston, where his lawyers argued jurors will be biased against him. The 21-year-old faces possible execution if convicted in the 2013 attack that killed 3 and injured 260. An earlier request to move the case was denied.

She’s not the only one who made a scene:

Among them was Elena Teyer, 45, a Russian native living in Savannah, Georgia. She yelled to Tsarnaev in Russian what she later said were words of support. He didn’t respond to Teyer, who was led out of the courtroom by marshals.

On her way through the doors, Teyer switched to English to decry what she said was the U.S. government’s assassination of her son-in-law, Ibragim Todashev. Federal investigators said he was suspected of carrying out a triple murder with Tsarnaev’s older brother Tamerlan two years before the marathon bombing.

“They were telling the whole family that they know for sure that Tamerlan and Ibrahim were involved in a triple murder,” Teyer said outside the Boston federal courthouse. “When it came to the evidence, they said they have nothing.”

We already know that in the wake of the attacks, the progressive hivemind insisted upon swinging away from the terrorism narrative and instead focused on a narrative that cast America as an aggressor against young idealists who were clearly just caught between two very different worlds. I am certain that in the lead-up to this trial, the media is going to do their best to resurrect this narrative and transform what should be an effort to seek justice for three dead Americans into “a conversation” about how America treats immigrants—especially Muslim immigrants.

Progressive America is so eager to find explanations and scapegoats and “conversation” topics that they tend to ignore inconvenient things like evidence and facts. It happened in Ferguson, and it’s about to happen in Boston, a city that’s been through quite enough without the media complex poking around for a reason to start blaming the victims for the sins of the accused.

Until quite modern times all teachers and even all men believed the universe to be such that certain emotional reactions on our part could be either congruous or incongruous to it — believed, in fact, that objects did not merely receive, but could merit, our approval or disapproval, our reverence or our contempt.

I myself do not enjoy the society of small children: … I recognize this as a defect in myself — just as a man may have to recognize that he is tone deaf or colour blind. And because our approvals and disapprovals are thus recognitions of objective value or responses to an objective order, therefore emotional states can be in harmony with reason (when we feel liking for what ought to be approved) or out of harmony with reason (when we perceive that liking is due but cannot feel it). No emotion is, in itself, a judgement; in that sense all emotions and sentiments are illogical. But they can be reasonable or unreasonable as they conform to Reason or fail to conform. The heart never takes the place of the head: but it can, and should, obey it.

Where the old [way of education] initiated, the new merely ‘conditions’. The old dealt with its pupils as grown birds deal with young birds when they teach them to fly; the new deals with them more as the poultry-keeper deals with young birds — making them thus or thus for purposes of which the birds know nothing. In a word, the old was a kind of propagation — men transmitting manhood to men; the new is merely propaganda.

Could you please post a more flattering photo of the murderous Chechen dope head? Maybe like this one:
http://www.wcvb.com/image/view/-/19849540/highRes/2/-/maxh/460/maxw/620/-/f6ahs5/-/Dzhokhar-Tsarnaev-Actual-Arrest.jpg

(Think that’s hyperbole? Have you ever met someone from Boston? They take Boston seriously.)

Those Chechen terrorists turned Boston and the metro area into a war zone. Who wouldn’t get upset? Oh, wait … What has the gov’t done since then to guarantee us that this won’t happen again? Bozo lets terrorists in, including now Castro! The FBI dropped the ball — many times, in fact. Who is working to change this? Gov Patrick? He should have dropped everything and stood up for us to the Feds, but he’s busy giving EBT cards to more Chechens. Same for Mayors Menino & Walsh. Our reps, senators, the gigolo Sec. of State, etc.

You bet Bostonians are mad. Nobody in gov’t really gives a rat’s patoot as far as I can tell. Once the guilty verdict comes in, there should be a 100k-man march to the courthouse to take the creep and string him from the Zakim Bridge, and issue a statement about our treasonous president and FBI, and to thank the cops who stepped up when it counted.

BTW, I’m not from Boston, so you can imagine what a real Bostonian thinks.

Right. ANOTHER case of KNOWN Wolf attacks on people made possible by nothing but PC bullshit. That is a deep, dark pathology we need to excise from our nation.

I’d hang him from the Green Monstah.

Then hit fly balls at him.

P.S. If public execution is too much for folks, let the authorities give him the shot first, then march him to the bridge. A public wake, of sorts. Maybe wrap him in bacon?

The voluminous record of investigative transgressions by the FBI in the case of Ibragim Todashev appears to me to be a deliberate cover-up of an interrogation gone wrong.

The killing of Ibragim Todahev was covered in great detail in Boston Magazine and later on PBS before The Atlantic took a look at the fatality that was very similar to the Michael Brown fiasco in that multiple shots were pumped into Todashev until a fatal headshot occurred.

The feds issued a final report with more questions than answers and there was no grand jury and no protest about the findings that declared the FBI and Massachusetts State Police involvement as entirely lawful in the circumstances. General Holder, by the way, did not even comment about the unfair killing of a minority Chechen.

When he is convicted and sentenced to death I would hope that they would allow him to hold his koran in the hand that they are not using to prepare the lethal injection. It’s too bad that the authorities wouldn’t consider mixing the lethal injection with pig’s blood. Or that they would grind his body with pig parts and feed the mixture to dogs. Those dogs could be preserved to do this procedure again and again. When one of the dogs dies, feed it to pigs. When one of the pigs dies, feed it to the dogs. Ad infinitum. Nothing in the Constitution would prohibit this. Nothing in the Eighth Amendment would prohibit this because he’s already dead.