So much for that “Hail Mary” 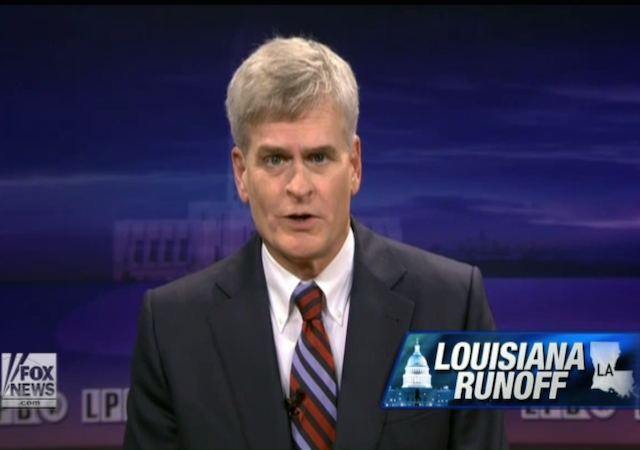 On December 1, Democrats will gather together in a last ditch effort to save Mary Landrieu’s political career—but all the money in the world might not be able to save a race that many leftist groups have written off as a lost cause.

The swanky fundraiser, headlined by Hillary Clinton, is sure to bring in a sizable chunk of cash, but it might not be a helpful optic for the embattled incumbent. Clinton headlined a rally for Landrieu days before the general election, and Landrieu still failed to rally enough voters to hit the 50% mark.

In fact, it seems like Landrieu can do nothing right these days; her campaign is foundering, and even progressive strategists are looking at this runoff as a prime example of what not to do when your campaign is in trouble.

She’s fallen back on an advertising strategy that seeks to portray her GOP opponent, Rep. Bill Cassidy (La.), as bumbling and incompetent. But nearly three weeks into their final faceoff, it is Cassidy who is ahead in the polls, and Democrats who are worried that Landrieu’s efforts are falling short.

“It didn’t work before, and if all you have is Cassidy bumbling in a speech, then you’re reaching,” said Danny Ford, a Democratic lobbyist and former party official in the state. “If they had something else on him they would have played it already.”

Bernie Pinsonat, an independent pollster and political consultant in Louisiana, called the ads “goofy” and said that they do nothing to alter the narrative in the state that Cassidy is bulldozing his way to the finish line.

While another Democratic operative close to the race argued that Cassidy remains a relative unknown who can still be defined by the ads, nearly three weeks into their final faceoff, strategists say it’s the Republican who is running the more effective campaign.

Meanwhile, tea party groups and activists who worked hard to split the Republican vote in the general have joined Team Cassidy, as have volunteers brought in by the RNC and NRSC’s joint grassroots effort. This is significant not just for Cassidy’s race, but for races in the future.

We can joke about #unity all we want, but this is a huge deal, and it proves that when push comes to shove, conservatives have what it takes to take back territory that strategists and consultants have previously written off as “blue.” Cassidy may not have been the first choice of FRC, but they recognize that Senator Cassidy will be much, much more effective than Senator Landrieu in passing more conservative legislation.

Right now, volunteers are busy building relationships with voters in communities all over Louisiana—and it’s paying off. This isn’t just about one more Senate seat (although I’m all for grabbing as many Senate seats as we can); this is about showing the Democrats that our machine is capable of being just as if not more powerful than their machine.

Anyone no on board with the “lose more slowly” GOP establishment is a kulak “wrecker”.