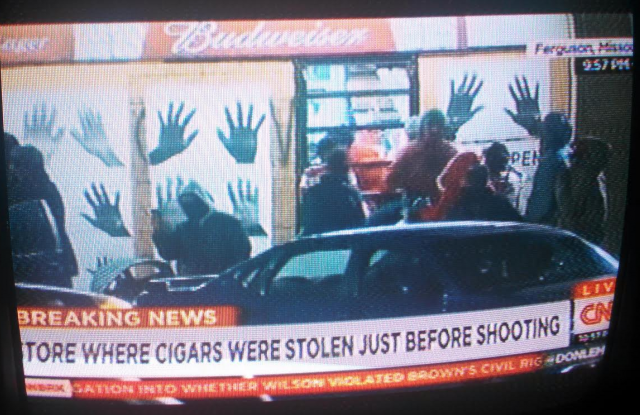 After last night’s protests in Ferguson boiled over, Missouri Governor Jay Nixon has tripled the National Guard presence in Ferguson in an attempt to quell the violence.

At an afternoon news conference, Mr. Nixon said that he had ordered the deployment of 2,200 National Guard soldiers to Ferguson. “Last night, criminals intent on lawlessness and destruction terrorized this community,” he said. “What they’ve gone through is unacceptable.”

Earlier, Mayor James W. Knowles III of Ferguson criticized the governor for not deploying the Guard quick enough to save some of the businesses that burned.

“The delay in deploying the National Guard is deeply concerning,” said Mr. Knowles, adding that he had not spoken directly to the governor since late August, despite almost nightly protests in Ferguson since.

Police officers were overwhelmed by the wave of violence Monday night after the grand jury’s decision was announced.

Jon Belmar, the St. Louis County police chief, said demonstrators had set fire to at least a dozen buildings in and around Ferguson, and he estimated that he had heard about 150 gunshots. None of the shots, he said, were fired by the police.

Last night’s Ustream livestream from the ground in Ferguson is still up and running:

If you’re looking for something a little more conventional, local Fox affiliate is still livestreaming their coverage. You can watch here:

The DemocRATs in Missouri are toast. After the mayhem in Ferguson, the last 3 months, it is a wonder that the people have not started a recall petition for all of the DemocRAT office holders. Maybe someone with grow a pair and shove the Right Rev Al, the New Black Panthers, the failed Occupy Wall Streeters, the state controlled media and other assorted radical rabble out of their state.

Things are a lot quieter tonight, Deo gratias. The bigger show of force has saved property so far.

Maybe it’s time for a little chuckle about the resolve of the thugs. Could it be that the instigators’ rhetoric of hate is insufficient to motivate couch-potato militants to risk their hide for “the cause?” Could the welfare state have drained enough testosterone to undermine the revolution it was designed to engender?

Not to get overconfident. When the Fed can no longer buy down interest rates, the welfare checks will shrink. Then the takers will have nothing to lose.

They got all that ‘free’ likker and cell foams last night and gettin’ they drank on and runnin’ they mouths about how great it all was is more important than being down with the struggle.

Besides, it’s warmer inside and it’s T-Day-2.

I’m pretty sure it was your President’s exhortation DURING the riots to stop rioting & watch his press conference on TV. On a more serious note: Having a Race-baiter as Head of State will resound down the ages, these are moments of historic importance.

Michael Brown’s strong arm robbery of cigars has led to hundreds of victims. These would include his parents, Officer Wilson and his family, the community of Ferguson including a young black Christian woman who owned a store named Hidden Treasures (store demolished in flames by rioters) and the hundreds who have been injured physically, financially and emotionally. It takes of a village to raze a community.

Black America as a whole is victim to a serious deficit of leadership from the WH and AG Holder. And, Black America is being used by Al Shaprton, Jesse ‘PUSH” Jackson and the race industry, an ‘industry’ which strives to diminish knowledge about black violence for the sake of increased redistribution.

Indisputably good Black Americans like Dr. Alveda King would never encourage the barbarian acts of the rioters while the above mentioned culprits are in serious and silent denial.

The truth is another victim.

Several ‘eyewitnesses’ perjured themselves when they gave testimony to the grand jury, apparently so that the fires of outrage could “burn, baby, burn.” But self-immolation will never be the pathway to success.

Thank god we have a gigantic redistributive Progressive government that has created a booming economic milieu in Ferguson! Not! “Consume , baby, consume” is the Keynesian economic war cry but that is not going to happen in Ferguson for a long while. Oops! Another bailout is required!

While tempers flare and torch the town of Ferguson even now bureaucrats are planning ways to burn taxpayer money to put an end to non-existent manmade global warming (GW)!! No doubt the next concocted report out of the UN regarding GW will diagnose human anger as being directly correlated to GW!!

Michael Brown. We need a folk song to sing the praises of his cigar stealing pot smoking “f**k-the-man, “f**k you” ways. Al Sharpton can buy the rights to help finance the race industry’s fight with itself.

I did the math. Three times zero is still zero.

But there is a new meaning to “under cover of darkness”, perhaps.

The darkness being the evil played out in that poor little city. There are a lot of people ready to exploit all of that.