Sucker punched in patrol car by enraged attacker who leaned in and took his weapon, just like Michael Brown attempted on Darren Wilson. 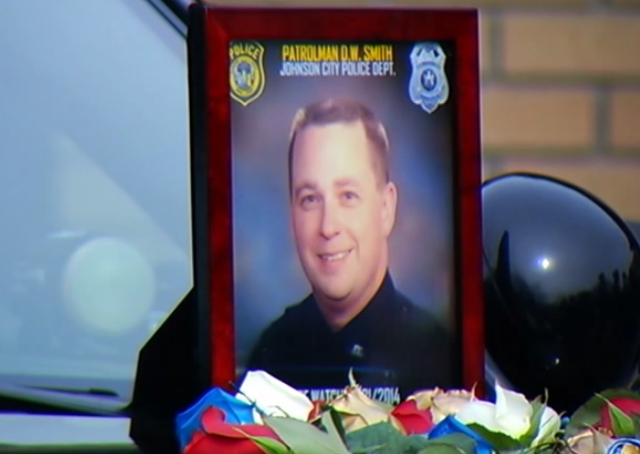 Darren Wilson, the Ferguson Police Officer whom a Grand Jury declined to indict over the shooting death of Micheal Brown, gave a lengthy in-person interview to George Stephanopoulos on ABC News last night. That interview is embedded at the bottom of this post.

But this post is not really about Darren Wilson, at least not directly.

It’s about Johnson City, NY (near Binghamton), Police Officer David Smith, who was involved in a similar incident on March 31, 2014.

A reader from this area (Johnson City is about 45 minutes from Ithaca) forwarded me the link, writing: “I had forgotten about this event very close to home but it seems to me that it is relevant to current events.” 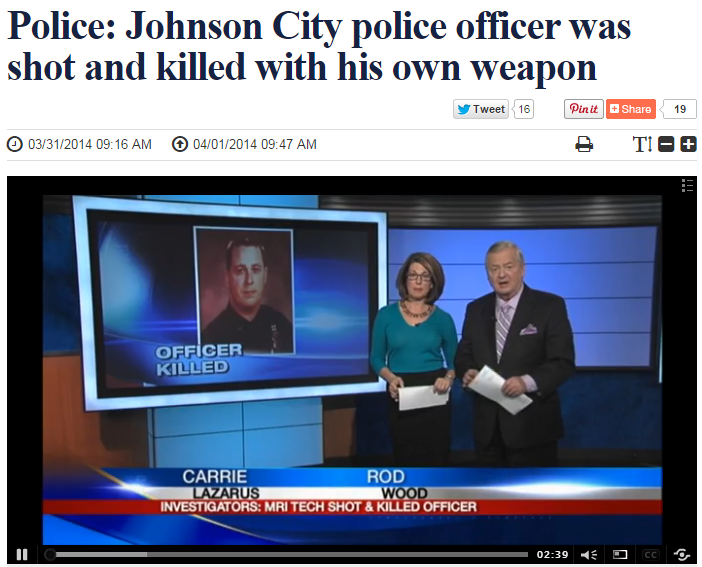 In that incident, a seemingly crazed and aggressive perpetrator managed to take Officer Smith’s weapon from him, and then use it to murder Officer Smith:

Police say a suspect shot and killed a Johnson City police officer with the officer’s own weapon on Monday morning.

Officer David Smith was an 18-year veteran of the force, police said at an afternoon news conference.

The suspect, 43-year-old James Clark of Greene, pulled away Smith’s weapon and shot the officer three times, according to police.

Clark fired at another officer, who then shot the suspect several times. Clark was taken to a hospital and later died.

As recounted in this video, the circumstances were remarkably similar to the initial assault on Darren Wilson by Michael Brown: Sucker punches to an officer seated in his patrol car, with the perpetrator then leaning in to try to steal the weapon:

But there was no looting, no rioting, no arson, no businesses destroyed.

If Michael Brown had managed to get Darren Wilson’s service weapon from him, that would have been the reaction too.  Just a collective shrug.  No presidential televised addresses to the nation.

Officer David Smith never lived to tell about what happened to him.  Officer Darren Wilson did.

Here is Officer Wilson’s account of what happened, and how he survived:

With all due respect to Officer David Smith, Johnson City P.D., it’s a very simple equation:

The Michael Brown slaying (and the Jordan Davis slaying, and the Trayvon Martin slaying, and Rodney King, etc.) are only of interest because they further The Narrative™ of white-on-black discriminatory violence. White-on-white violence, black-on-black violence, and even black-on-white violence aren’t “offensive” enough to rouse the rabble and mobilize the mob, EVEN IF race is a factor. Only white-on-black violence counts, and it always counts, even if racism is out to lunch.

However, neither the Trayvon Martin experience, nor the Michael Brown experience have anything to do with the Rodney King experience.

Trayvon Martin was responsible for his own demise because he was the one who threw the punches in the first place. Like Michael Brown, he was a gang member (or a wannabe)but the gang was the Crips not the Bloods. Like Trayvon Martin he attempted to steal a gun held by the other person. Both of them used violence against another person. In both cases the other person feared for his life.

Now I am not totally cognisant to the whole Rodney King issue since what was presented to me came through the lens of a Marxist Media. We saw the footage of the violence by the cops but we did not see the rest of the story…. and there must have been more to the story.

Here in Australia the Marxist Media continues the lies about Michael Brown – that is they proclaim the nonsense about him being unarmed. Michael Brown had 2 arms with hands attached and those hands were lethal weapons.

Having lived in LA a times and in various guises, I can promise you this…

The LAPD…or any of the LEOs in the LA metroplex…would beat the living dogspit out of me if I did what Rodney King did in the day.

They are VERY thin in terms of manning, and they are scared. This is true of cops in general, and it’s good to know. They are also human beings who have human physiology. You lead them on a high-speed chase, and then bail out of your car like a mad Brahma coming out of the gate, and they WILL beat you down.

Rodney King was also responsible for his own beating. It was his choice to drive at an incredible speed, try to flee from the police, and then to violently resist arrest. As the second trial established, the entire beating was justified except for the last six blows.

And he wasn’t just out for an innocent drive; there’s a reason a jury from Simi Valley acquitted the cops, which is that they knew he was headed towards them when he was stopped, undoubtedly intent on no good, and if he hadn’t been stopped any one of them might have been his victim.

The general consensus is that Rodney King was no “innocent victim”. But that’s not where I was going.

I’m acknowledging the elephant in the room (that we dare not speak of): If Rodney King had been a white skinhead beaten down by white cops, there would have been an investigation and trial on the brutality charges, but it would not have made national headlines. If Rodney King had been a black man beaten down by black cops, ditto. It’s only important to the “Rev.s” Jesse Jackson and Al Sharpton because it’s white-on-black “discrimination” and “racism”.

In this respect, the Rodney King case is identical to the Trayvon Martin and Michael Brown cases: the relative melanin content of those involved is more important to The Narrative™ than their actions.

“I have a dream that my four little children will one day live in a nation where they will not be judged by the color of their skin, but by the content of their character.” Dr. Martin Luther King is rolling over in his grave so fast, we could hook up a generator and power the rebuilding of Detroit for the next century.

Why would anyone expect to survive attempting to take a service weapon from a law enforcement officer?

But apparently Michael Brown was a “gentle giant”, wasn’t he?

Rags, that was quite good. Your kudos will arrive shortly.

If you order them from Amazon, you support this blog!

Year to date 106 law enforcement officers died in the line of duty, 43 of them by gunfire.

See the Officer Down Memorial Page (odmp.org) for details.