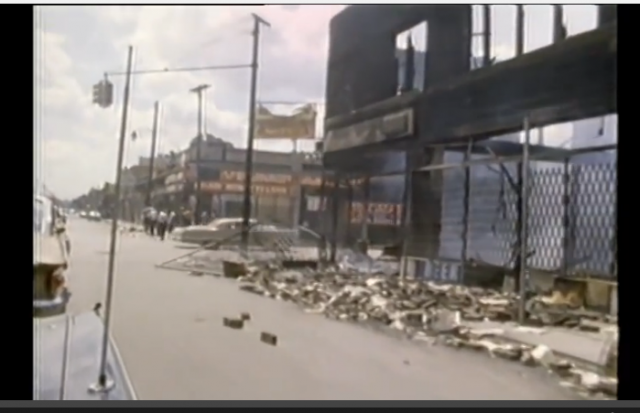 One of my most haunting memories from childhood involves a group of teens from a local Michigan high school; they pounded on our front door and begged my mom to call the police. This was during the 1967 Detroit Riots, when several groups of hostile students decided to take the conflict into our small suburb.

My father was away, working as a reporter for the Detroit Free Press, and his team’s coverage of this event lead to a Pulitzer Prize. My mom took the students in, made the call, and comforted everyone until parents arrived to pick up the group who fled to our doorstep.

A short summary of this event via PBS shows seems similar to what unfolded yesterday:

For five days in July, Detroit, Michigan descends into chaos. An economic boom has created jobs, and urban renewal projects have built new infrastructure, but blacks have been left behind. New expressways destroy black neighborhoods, and economic opportunities are scarce for black residents. The 95% white police force, notorious for brutal and arbitrary treatment of black citizens, raids an illegal after hours club and draws an angry, frustrated crowd that quickly turns hostile.

As Sunday July 23rd dawns, the growing crowd is looting and burning the city. Twelve hours into the frenzy, Governor George Romney calls in the Michigan National Guard; unprepared troops make mistakes like shooting out the street lights. Nearly 4000 people will be arrested in the first two days, and over 7000 by the third. Most are young and black. Police and guardsmen shoot at will, with some later insisting that all of their victims were armed.

Some footage from the station, WXYZ, and covered by two of the areas best-known reporters of that era:

Now, not even 50 years later, the race-baiters and societal malcontents have ginned up tensions in hopes of creating another iconic civil rights moment in Ferguson. However, there are stark differences between then and now:

I followed the news with a great deal of apprehension today, recalling the 1967 violence. I am somewhat relieved to learn that, even in Detroit, the protests are relatively peaceable.

The demonstrators carried picket signs and chanted outside the federal courthouse on West Lafayette downtown, “Hey, hey … ho, ho … killer cops have got to go,” and “What do we want? Justice!” under the watchful eyes of federal security officers and top city police officials.

“We’ve very upset,” the Rev. Charles Williams III said. “Our concern is that there was no trial.”

The [Detroit] rally was one of 28 that took place in cities across the country. Williams said “a national mobilization” is being planned as part of a larger demonstration against the grand jury’s decision, which he said was unjust.

Hopefully, those interested in true justice will ignore the agitators from the Communist party, HAMAS, and Anonymous and eventually come to accept the Grand Jury returned a just verdict in this case.

The elite media may want to recreate the 1960’s, but that time has long gone — as have the real heroes of that era.

Well sure, the decade is gone but we are still suffering the ill effects of the 1960’s. Take a gander at photos of Hillary Clinton, Eric Holder and Barack Obama from that era. They all had their heads in the clouds sniffing rainbow dust and unicorn farts, and they still are.

The Communists put their roots down inside our institutions of power and education during that decade, and now they’re starting to rear their ugly heads, as evidenced by the bullshit that is going on over “The Gentle Giant (TM)” right now.