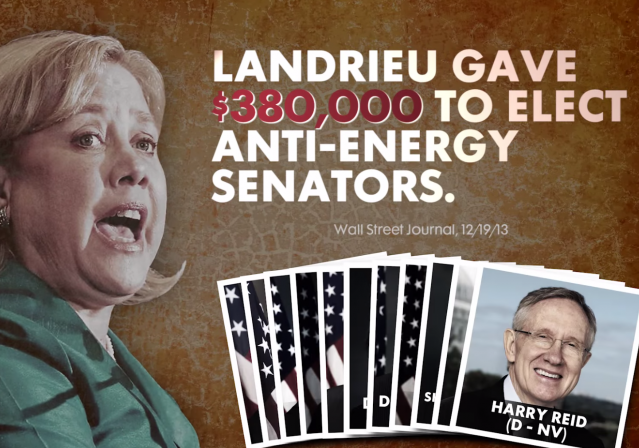 Senator Mary Landrieu (D-LA) is facing a tough runoff with Republican challenger Representative Bill Cassidy, and she’s doing her best to spearhead a legacy vote before Louisiana voters head to the polls in December.

Landrieu, who currently chairs the Senate Energy and Natural Resources Committee, is pushing for a Congressional vote approving the Keystone XL pipeline in hopes that it will ingratiate her with voters who haven’t yet decided whose name to check on Election Day 2.0.

“This has been a project that has lingered far too long. It is clearly supported by 60 or more members of this body,” Landrieu said on the Senate floor Wednesday, minutes after lawmakers kicked off their post-midterm election lame duck session.

The Louisiana Democrat is fighting for her political life ahead of a Dec. 6 runoff election against Republican challenger Bill Cassidy.

The Keystone XL pipeline represents a chance for Landrieu to flex her muscles on issues important to her energy-rich state one last time.

Republicans have countered her moves by promising Cassidy a seat on the energy panel.

This move by Landrieu may ingratiate herself with the energy lobby, but if President Obama chooses to veto Congressional approval of the pipeline project, her efforts may be meaningless:

“I’ve never seen labor and business come together in my life like I have on this issue,” Landrieu said. “I’ve never seen so many senators cosponsor a bill and yet, because of something I can’t quite put my finger on, we haven’t yet passed it — and I think we can do that now, today.”

President Barack Obama has repeatedly said he’d rather let the State Department conclude an independent review before deciding whether to move forward with the pipeline, which would carry oil from Canada to Texas — though he hasn’t said whether he would veto legislation from Congress if lawmakers decide to force his hand on the issue.

Landrieu can talk all she wants, but what the energy lobby is really interested in is results. If they’re confident that the President will veto Congress’s plan to greenlight the project, they’re not going to throw substantial weight behind Landrieu’s bid—especially when they’re certain that Cassidy will play ball during the new session.

RNC, NRSC, and top campaigns are busy flooding Louisiana with money and volunteers who are ready to work for a Cassidy victory. If Landrieu wants to outsmart that large of a grassroots machine, she’s going to have to do a little better than a high profile pander to the energy lobby.

And I just read that the House version is Cassidy’s Bill…… the campaign ads write themselves!

It’s uncanny – she really does look like a pig. ‘Porcine’ is the word.

Still a jerk eh rags? Not like there aren’t 50 things to rag on Sen. Mary about, but you have to pick on her looks. Stay classy.

Let’s not start celebrating too early. We still have an election to win.

“…and yet, because of something I can’t quite put my finger on, we haven’t yet passed it…”

How putting the finger on Harry Reid?

I just hope all the folks from LA see past this rather obvious scam to get their votes, and make a conscious decision to elect a Republican by a landslide, just like the voters in many other states did on Election Day. Then they can enjoy the results of being in the majority party as the adults set out to clean-up the messes left by the irresponsible Prog/Dem “children.”

If LA re-elects the Dem, they will be the laughingstock of the country, and the results of that ill-informed and poor decision will haunt them for years, if not decades.

“How putting..” should be “How about putting…”

Someday I’ll master cut-and-paste editing, but today is not that day.

I’ve read that the RINO party is sending lots of staffers down to LA to knock on doors.
That’s about the only thing that I can imagine holding the people of LA back from ditching Landrieu 🙂

The energy lobby knows they’ll get the vote from Cassidy anyway and an override vote from him that they wouldn’t get from Landrieu. So she’s writing a check with her mouth that her ample butt can’t cash.

It’s too little too late for Sen. Landrieu. They know her voting history, and they see that it takes a serious threat to her position to get her acquiescence. They already know she’s clearly not a reliable vote for a robust energy industry, no matter the tune she’s singing now. That dog ain’t gonna hunt.

She’s not going to fool anyone, including voters, with this blatant attempt to walk back her impotence in the Democratic Senate.

I doubt Cassidy will win by 16%, but he could very well be in the low double digits. In any case, it won’t be very close.