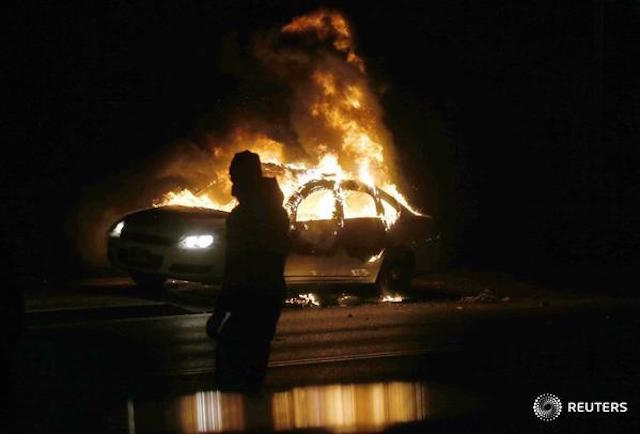 Last night’s grand jury verdict vindicating officer Darren Wilson in the shooting death of Michael Brown sent the people of Ferguson, Missouri into a tailspin. Even as the verdict was being read, reports began to trickle in of vandalism, looting, and violence against police officers attempting to keep the peace.

The racially charged case in Ferguson has inflamed tensions and reignited debates over police-community relations even in cities hundreds of miles from the predominantly black St. Louis suburb. For many staging protests Monday, the shooting was personal, calling to mind other galvanizing encounters with local law enforcement.

Police departments in several major cities said they were bracing for large demonstrations with the potential for the kind of violence that marred nightly protests in Ferguson after Brown’s killing. Demonstrators there vandalized police cars, hugged barricades and taunted officers with expletives Monday night while police fired smoke canisters and pepper spray. Gunshots were heard on the streets.

(added) Mark Levin notes how the lawlessness is a symptom, not the cause:

Ferguson burns and violence has been unleashed thanks to the reckless liberal media, the lawless administration (especially Eric Holder) exploiting the shooting to smear police departments across the nation, phony civil rights demagogues, race-baiting politicians, and radical hate groups.

The lies about why and how Officer Darrin Wilson shot Michael Brown started on day one and never ended. The indisputable facts are that Brown was shot because he assaulted a police officer, attempted to take the officer’s pistol resulting in two close range gun shots in the police cruiser, and then turned around and charged the officer as he was being pursued. The entire event was precipitated by Brown earlier stealing cigars from a local store and assaulting the owner.

What we are witnessing now is the left’s war on the civil society. It’s time to speak out in defense of law enforcement and others trying to protect the community and uphold the rule law.

A storage facility is burning in the background of the stream. @vicenews is LIVE; https://t.co/1tzZzKbJil #Ferguson pic.twitter.com/CDiqrFKF3o

Michael Brown’s mother was caught on camera lashing out both against the grand jury verdict, and against repeated calls for calm from officials. Rebel Pundit has the video:

Across the country, activists and average joes took to the streets to protest the verdict, and speak out against the alleged racism and institutional violence they believe led to the death of Michael Brown.

Standoff between protesters & police on 580fwy in #Oakland #FergusonDecision pic.twitter.com/54WwFKdomx

Protesters in #Oakland are now in the eastbound lanes of I-580 too. #Ferguson http://t.co/7rcs9fwtrH pic.twitter.com/0v2gRq29mX

As this was happening, a protester yelled: "Seattle, you know your hands aren't clean." #Ferguson #Seattle pic.twitter.com/okurFdOL42

Police are lining the route to keep demonstrators from heading east or west. http://t.co/0sUPFAwlTx #Ferguson pic.twitter.com/xtAN51Iexu

"How can you be a part of this?" one protester shouted in the face of a bike cop. http://t.co/0sUPFAwlTx #Ferguson pic.twitter.com/q2P39dhVCh

It was chaos, and it apparently isn’t over yet:

This was sent to me from Philadelphia. It was being passed out in the city. #disturbing #Ferguson pic.twitter.com/tmFYP8Wae1

I could do a lot of pontificating about race in America, or about how it isn’t productive to burn down your own neighborhood, but at this point all I’ll say is, please pray for the people in and around Ferguson.

All the reason in the world isn’t going to bring back what was lost in Ferguson this year. The only thing left to do is drag Ferguson out of the dark, and rebuild.

One of the enduring Leftist memes is that poverty causes crime. How can they not look at these scenes and realize that they have it backwards: that crime causes poverty.

After decades of the War on Poverty, and over $20-trillion thrown at it, there is little money in these neighborhoods. What money there is gets sucked out through rioting, through drugs, through looting, through theft. The money taken in those crimes is not spent in those neighborhoods – it’s given to insurance companies, drug lords, crime bosses, gang leaders – none of whom invest one, stinking dime in these communities.

Poverty does not cause crime; at best it increases the temptations to crime. But crime sure as hell causes poverty.

I don’t think it is that simple. Crime and poverty share a common cause, poor decision making ability. Taking a poke at a cop is a poor decision, one that has a non-trivial chance of getting one shot by the police. Thus, when I have a rare interaction with the police, a traffic stop for example, I choose not to take a swing at them. The encounter goes smoothly and we both go on our way.

Likewise, dropping out of school because it isn’t as fun as sitting on the couch smoking pot and playing Xbox is a poor choice, one that leads to poverty and a life of crime in many cases.

The brilliant Heather MacDonald has debunked the poverty >>> crime canard.

But let’s define terms a little more closely. Persistent, generational poverty comes of poor decision-making. But the NEXT question is WHY is poor decision-making so apparent in some demographics? It seems apparent that we have been training people to make bad, awful, terrible decisions. How do we stop that?

A brief, transient episode of poverty can strike in the life of anyone, given a catastrophic misfortune. And there is absolutely no correlation between people who are impoverished and people who commit crime. The Great Depression proved that.

Why were the people of the Depression not ravening criminals? Because they had been taught values, and those values informed their conduct, as did their ability to think, which is ALSO a matter of training.

I found an nice old footstool I remembered from my youth, in the basement here (on the old farm). Through a mouse eaten part I discovered it was just some old tin cans tied together, then covered with a newspaper pad and some fabric. That was likely from the 20-30’s, along with the grapevines for wine during prohibition.

They made do, and worked a LOT. It’s almost sad how hard they worked at some periods, to survive. Now … Obamaphones and flat screens for free, or we riot. sheesh …

“But the NEXT question is WHY is poor decision-making so apparent in some demographics?”

There are answers, but they are not politically correct so they must not be mentioned.

When you need a Korean shopkeeper, there’s never one around.

Not sure what it means, but winning a NBA or NCAA championship has caused worse rioting. I honestly don’t know what to make of that, but it seems to indicate something.

Interestingly, there is a taxonomy of rioting.

Thanks for that. I’ll get that 1969 book cited by powerline. The excerpts were on the money.

My father was a 20 yr vet patrol officer in Detroit at the time of the 1967 riots and I was just 12. As a city employee he had to live within the city limits. We got evacuated when the flames got within 5 blocks and spent the rest of the summer in Wheatley, Ontario 50 miles east of Detroit. Non-street officers and police supporters had a sort of underground railroad going, escorting officer families out of the city to safer grounds. I remember vividly when we returned in late August. We reentered the US by the Ambassador Bridge from Windsor Ont to Detroit and from the heighth of the bridge it was just block after block of burned out businesses and homes as far as I could see. Our house was 2 blocks on the good side of the outer burn line. A lot of the police and firemen refused to wear uniforms as they worked because of all the riot snipers shooting at anybody in a uniform or inside a marked city vehicle. ’43 dead, 1,189 injured, over 7,200 arrests, and more than 2,000 buildings destroyed’ per wiki. My father laughed at the official death count of 43, said he personally saw bodies floating in the Detroit River that weren’t counted, plus the local gangs used the cover of rioting to eliminate competitors while the DPD was otherwise ‘busy’, also not counted.

A nasty riot, yes, but it served a purpose – Detroit is now a thriving, bustling wonderland, a blissful mix of top level culture and commerce, a true shining city on the hill and a powerful example for any American city to follow.

Yep. It’s been burning for decades. Sometimes in open flame, others just smoldering under the pine needles…

Transcript of the Officers testimony: