What protesters have destroyed, can be rebuilt 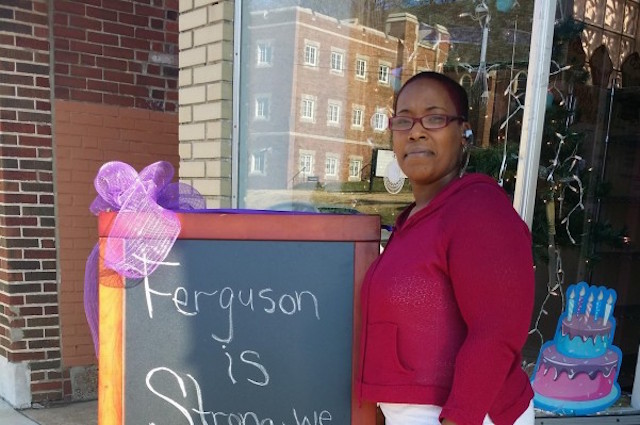 Ferguson is on fire, and small businesses are suffering.

Our coverage of the violence in Ferguson has included tweets and photos showing rampant vandalism and destruction of locally owned businesses; from pizza joints to beauty shops to liquor stores, proprietors have been punished for the grand jury verdict, and many shop owners are now weighing the benefits of rebuilding vs. boarding up.

One of those shop owners, Natalie DuBose, has decided to pick up the pieces and keep fighting.

Natalie DuBose sold her cakes at flea markets to save up to own her own shop. Tonight it was attacked in #Ferguson. pic.twitter.com/WOKzgiSuKV

After the grand jury verdict was read and protesters took to the streets, the front windows of Natalie’s shop were smashed, and the bakery portion vandalized. Encouraged by friends and family, she created a GoFundMe donation page, and asked for help:

Hello, I’m Natalie Dubose of Ferguson, Missouri. I’m a small business owner with a cake shop and a bakery dream.

First, I would thank everyone for their warm wishes, empathy, and support during this crazy difficult time.

I would love to write more, and will try soon, but my business is so behind right now.

My shop, which had it’s grand opening this summer was vandalized in the riots.

My main windows were smashed and bakery damaged. I’m beside myself, but with the holidays, can’t stop working.

I’m very busy cleaning and trying to repair my business. I’m also trying to catchup on baking cakes for Thanksgiving!

It was my dream and I’m working hard to accomplish that dream.

The outpouring of support on Twitter, Facebook, and in the media has been amazing. I was in tears.

It was suggested that I start this account by a new friend and here it is. I do need help to rebuild and create a website, so any donations would be a huge assistance.

I’m not sure where to find the money to repair my little bakery. But, even if you just stopped by to say hello. Thank You !!!!

The results have been spectacular. As of this morning, over $60,000 has been raised to help Natalie repair her shop and make ends meet until things calm down in Ferguson.

I’ve repeatedly balked at the suggestion that business owners should “find another place to open up shop,” as if that’s the easiest thing in the world to do. Ferguson is not 1990’s Sarajevo; it’s a community that, until recently, was productive and relatively peaceful. It’s not an isolated soundstage for the media’s latest dystopian fever dream; it’s home.

For people like Natalie, it’s a place that deserves a chance to rebuild.

Rebuild? Why on God’s Earth would you want to REBUILD in a place where the locals are prone to rioting.

Take ANY money you’ve raised and any Insurance payout you can get, pack up your equipment and RUN. RUN as fast as you can to somewhere the populace isn’t made up of spoiled, welfare children who somehow think that something is “owed” to them, so they can act like thugs.

Because if it isn’t riots, it’s GOING to be OTHER “Strong Arm” robberies when people realize that you have a successful business, and therefore are likely to have cash.

Leave the burned-out husks of the building as a monument to the local’s stupidity. Let them complain and scream that they can no longer get basic essentials because “it’s too far away” and then, with as much snark as can be mustered tell them “well, then you shouldn’t have BURNED DOWN the local market.”

Hell no. Let Ferguson be from here on a wasteland. Let the people know that there are consequences to rioting, that if they burn down businesses they will not be rebuilt, and they will just have to live in the ruins they created.

Ferguson is not 1990′s Sarajevo; it’s a community that, until recently, was productive and relatively peaceful.

And now it isn’t. Tough luck.

Home can be changed. It’s not like we’re salmon, permanently attached to the same stream. People can and do move. How long do you think this woman was in Ferguson in the first place? Probably not that long. She moved there, she can move elsewhere.