“They all brought their Obama shirts to campaign in, only to learn that they should not be connecting Alison Grimes to Obama” 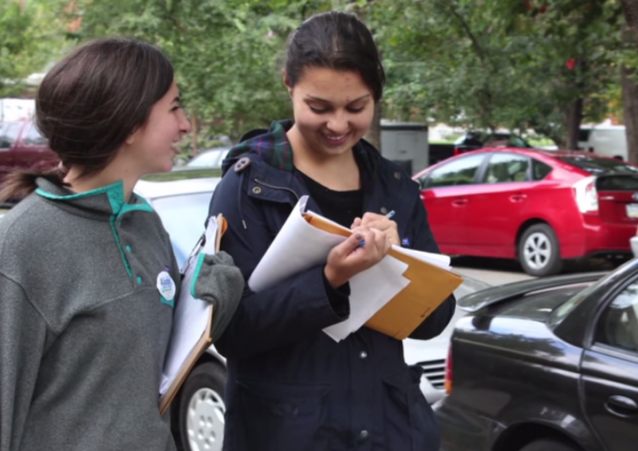 Aleister posted this story over at College Insurrection, but it’s worth a cross post here.

In light of Grimes’ repeated refusals to say if she voted for Obama, and attempts to distance herself, it’s not surprising that some of her volunteers came dressed inappropriately, namely, with Obama shirts.

One of the volunteers explains on video how students were told not to make the connection between Grimes and Obama by wearing the Obama T-Shirts — so they covered them over:

Many students filled their bags for the trip with t-shirts depicting President Barack Obama and their GW College Democrats shirts with Obama’s name emblazoned on the back.

But it wasn’t until they got to Kentucky that canvassers remembered to be careful not to connect Democratic candidates there with Obama. Alison Grimes, who is running against Senate Minority Leader Mitch McConnell, wanted to differentiate herself from the president and the administration’s policies that don’t resonate with Kentucky residents, like Obama’s policies toward coal mining.

Luckily for them, the weather was so cold they had to cover up anyway, and their t-shirts were hidden under jackets and sweatshirts.

“They all brought their Obama shirts to campaign in, only to learn that they should not be connecting Alison Grimes to Obama”

Orman’s declarations of independence are belied by the fact that 93 cents of each of his political dollars financed Democrats. This makes it about 93 percent likely that, if elected, Orman’s first senatorial decision would be to vote for Harry Reid of Nevada as majority leader and try to restore his granite grip on the World’s Greatest Deliberative Body. If Orman’s were the deciding vote, this would let Obama maintain the Senate as the mausoleum where reforms passed by the presumably Republican House would be laid to rest, rather than endorsed and forwarded to the Oval Office for signature or veto.

In tonight’s debate, Senator Pat Roberts should hammer that point all the way to victory.
–TheCorner

See, they just lie. It IS who they are. It IS what they do.

If I seem to recall…the republicans weren’t too keen on GWB campaigning for them either. Seems they all didn’t even mention his name in 2007.

dems are more concerned about this than 0bola.
how’s 0bola working out for everyone? Bwahahahahaha
https://www.youtube.com/watch?v=LmfRMeU6pQ8

kentuckians are really dumb if the vote for alison grimes…
she’ll kill their coal industry and vote for to pass anything 0bama’s wants…. everything and anything without hesitation if it costs the taxpayers billions/kills jobs.

College-aged Democrats live in a cocoon of ignorance and insanity.