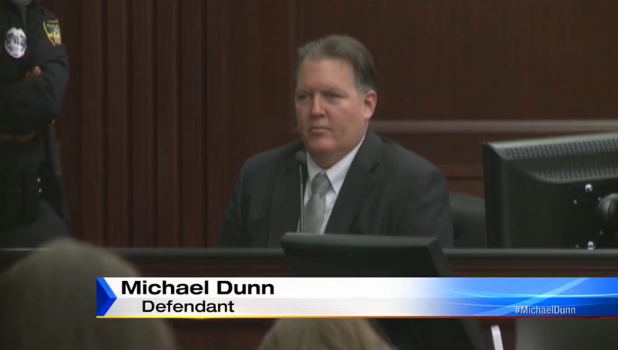 Michael Dunn has been found guilty of first-degree murder in the shooting death of black 17-year-old Jordan Davis on November 23, 2012.

This “loud music” murder case arose from the violent interaction between Michael Dunn and Jordan Davis and three of his teenaged friends while parked beside each other at a Florida gas station.  Dunn would fire three bursts of 9mm bullets at the red SUV in which the teenagers were sitting, mortally wounding Davis in the first burst of fire. Dunn fled the scene, and was captured by the police the following morning because a witness had noted Dunn’s license plate number.  Dunn would go on to claim that he fired in self-defense, that Davis had threatened to kill him, had pointed a shotgun-like object at him, and was exiting the car when Dunn retrieved his pistol and began firing at them.

The initial burst of three rounds penetrated the SUV’s rear passenger door and mortally wounded Davis, who would die within minutes.  Three bullets of a second burst of four rounds penetrated the exterior of the front passenger door, but did not enter the vehicle interior (these were recovered inside the door; the fourth round fired was presumably a miss).  The final burst of three rounds was fired into the rear of the SUV as it fled the scene.

Dunn’s first trial in February resulted in his conviction on three counts of attempted second-degree murder and of throwing missiles, most likely on the basis that the last burst of fire as the SUV fled could not be justified as lawful self-defense.  Dunn faces 60 years in prison for those convictions alone.

That jury, however, had hung on the first-degree murder charge.  Interviews with jurors afterwards revealed that three of the 12 had remained unconvinced that prosecutors had disproved self-defense beyond a reasonable doubt for the first burst of fire which killed Davis, the legal threshold that must be met for a legal claim of self-defense to be defeated in Florida (and every other state, except Ohio).

I covered the first Dunn trial verdict specifically here, GUILTY! Dunn Guilty of Most Charges, But Not Murder, and my collective posts on the case can be found at this link.

Prosecutors at the time immediately vowed to re-try Dunn, and that re-trial has now resulted in a first-degree murder conviction, which carries a life sentence. (Dunn’s sentencing on the earlier convictions had been delayed until the outcome of this re-trial, although he has been kept in custody during the interval.)

Road rage is when the rude and clueless meet the unbalanced and stupid.
The R&S will we have always with us. Being polite and attentive when driving takes away one of the ingredients necessary to road rage.
The violent and unbalanced (Dunn) we will always have with us. The in-your-face buttheads can choose not to try to annoy other people just for grins and take away one of the ingredients for issues such as this. Or not. Putting Dunn away doesn’t bring back the dead. He’s still dead, so this doesn’t exactly accomplish much. Going on about the freedom of young buttheads to crank up the woofer to piss off the public is fine, but that doesn’t bring back the dead butthead, either.

I would have figured he was guilty too, if I was sitting on the jury. Almost exclusively because he left the scene and didn’t immediately call the police. He damned himself good by doing that.

Dunn had imbibed alcoholic drinks prior to the incident. That obviously impaired his judgment. Further, his jailhouse correspondence reveal an embittered, racist outlook. No way around that fact. Remarking to his girlfriend that he hated “That thug music” betrayed a man in a dour disposition who was agitated over behavior that, however irritating it may have been, 99% of people who have ignored with detachment. And, if the youth had, in fact, cursed him back and raised the music volume higher after first lowering it, so what? Most people of intelligence and common sense would have dismissed them as discourteous idiots and simply have moved on, not escalated the confrontation by producing a firearm. Fleeing the scene was the final nail in the coffin, and spoke to Dunn’s guilty mindset. A person who has used a firearm in justifiable self-defense waits for the authorities, or, contacts them.