Are the VA firings significant?

Are the VA firings significant?

Republicans have their doubts, considering they’re not actually “firings.” 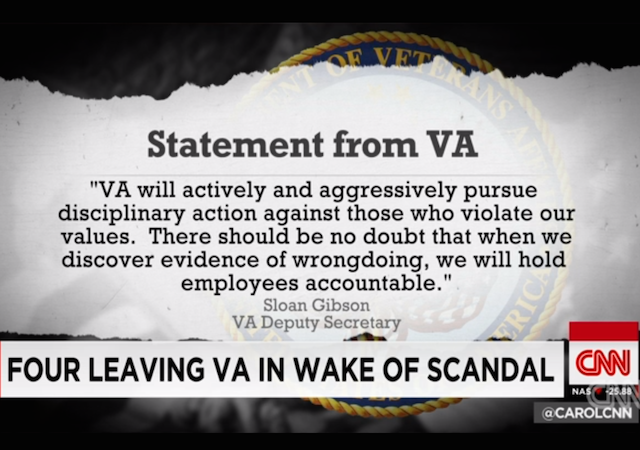 Today officials announced that four Veterans Affairs officials have been recommended for termination after investigations into their facilities revealed long wait times, unsafe water systems, and general “neglect of duty.”

VA headquarters revealed in a statement today that the heads of hospitals in Pittsburgh, central Alabama, and Dublin, Georgia, should expect to receive their pink slips, along with the VA’s deputy chief procurement director in Washington.

“VA will actively and aggressively pursue disciplinary action on those who violate our values. There should be no doubt that when we discover evidence of wrongdoing, we will hold employees accountable,” VA Deputy Secretary Sloan Gibson said.

The firings are a direct result of wrongdoing found by the VA’s Office of Inspector General and the Office of Accountability Review, including significant delays and wait times of veterans, manipulation of appointment data, “neglect of duty,” inappropriate handling of VA contracts and misconduct at VA facilities.

The firings also follow a yearlong investigation by CNN that found numerous instances of delays in care and, at times, deaths of U.S. veterans at VA facilities across the country. The reports sparked a national outrage, which led to the resignation of VA Secretary Eric Shinseki and prompted numerous House and Senate hearings.

Republicans in Congress are angry that this latest move by the VA merely recommends termination, as opposed to going the distance and just firing these people. Making matters worse, reports have surfaced suggesting that at least one of the officials recommended for termination had already planned on leaving the VA:

But this comes after the agency on Sept. 26 announced plans to fire John Goldman, director of the Carl Vinson VA Medical Center, in Dublin, Ga. — after announcing his retirement four days earlier.

“Bragging about the proposed removal of someone who has already announced his retirement can only be described as disingenuous,” said Florida GOP Rep. Jeff Miller, chairman of the House Veterans Affairs Committee.

On Tuesday, House Republican aides privately pointed out a list of concerns beyond the semantics of Goldman’s departure. They said he should be fired instead of being allowed to retire with a pension or other benefits, considering his facility was among those found to have falsified records to hide the excessive delays some veterans encountered when trying to get medical treatment.
…
“What I don’t want to see happen is for [senior employees] to retire, resign or find another government job outside of VA without consequence — a pattern that has been emerging in recent weeks,” Miller also said.

Even if the officials fired were already on their way out, this is a terrible optic that the Obama Administration will have to continue to deal with both before and after the 2014 midterms. Voters know that the VA has suffered under serious mismanagement, and these firings—politically convenient or not—will only serve to reenforce that point.

This is how the “brights” of the Obamic Decline have chosen to manage…which is to say NOT managing at all.

There are no consequences for anyone, unless you are in the military. And THOSE consequences are inverted to a great degree, since young officers and enlisted personnel are being run off after serving very well and with honor.

In the Obama VA, you can literally kill veterans, and still keep your job and/or your pension.

When someone from the Collective dares to say they “support our troops” you can spit in their eye. When they make any pretense at “efficient government” you can call them liars to their faces.