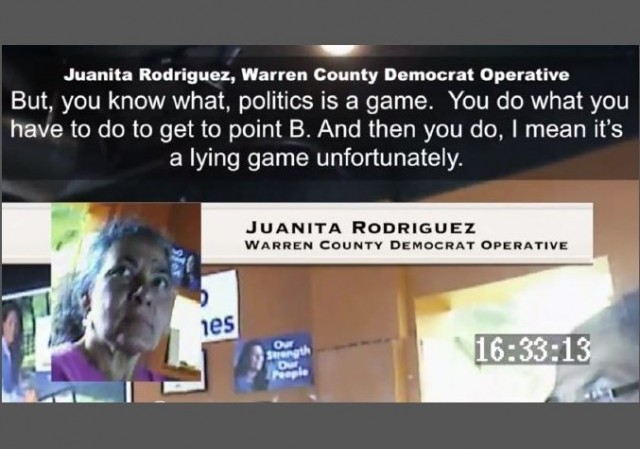 James O’Keefe’s Project Veritas Action has gone undercover with various Democratic campaigns, and is beginning to roll out video.

First up, supporters of Alison Grimes, who is challenging Mitch McConnell. Grimes supporters in the Democratic Party do not seem to have any doubt that Grimes is just playing the political game with the coal industry during the campaign, but will help take it down once elected.

U.S. Senate candidate Alison Lundergan Grimes is lying about her support for the state’s coal industry according to Kentucky Democrats, including members of her campaign team, who were captured on a hidden camera video.

The video, produced by conservative filmmaker James O’Keefe, shows five employees of the Grimes campaign and local Democratic Party affiliates speculating that the Democratic challenger to Senate Minority Leader Mitch McConnell (R., Ky.) is only professing her support for the industry out of political expediency.

“If we can get her elected do you think she is going to do the right thing and she’s gonna try to wipe out that coal industry and go for better resources?” asks an undercover videographer in one segment of the video.

Pretty amazing how dishonest Dems are. Especially when you consider that they want to control a one party state were the state controls every aspect of our lives.

435 House seats, 100 more in the Senate, and at a least half of them are cynical liars. It’s a wonder this country isn’t faced with many difficult problems.

You gotta know there are dozens of O’Keefe wannabes out there working for the libs too. Nothing’s come out yet because GOPers do their screw ups right at the damn podium.