Yesterday, Wisconsin prevailed in two separate challenges to the state’s voter ID laws, and certain state officials were not shy in their disappointment over the verdict. 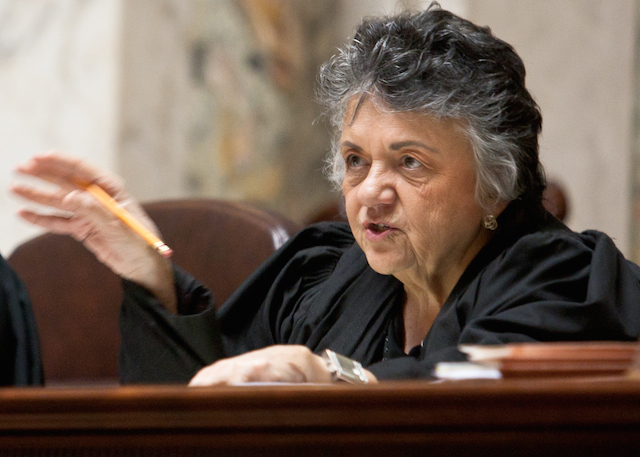 Yesterday, the Wisconsin Supreme Court upheld the state’s voter ID laws in two separate opinions that could drastically affect the rules governing the polling place come November. Although a federal court previously ruled Wisconsin’s laws to be unconstitutional, Wisconsin Attorney General J.B. Van Hollen told the press that yesterday’s separate rulings by the Wisconsin Court could convince the federal court to put its ruling on hold and allow the laws to remain in place for the fall elections.

Writing for the majority, Justice Crooks stated that the challengers to the law did not meet their burden of proof when arguing that the law violated the constitutional rights of Wisconsin voters:

We conclude that the legislature did not exceed its authority under Article III of the Wisconsin Constitution when it required electors to present Act 23-acceptable photo identification. Since 1859, we have held that “it is clearly within [the legislature’s] province to require any person offering to vote[] to furnish such proof as it deems requisite that he is a qualified elector.” Cothren v. Lean, 9 Wis. 254 (*279), 258 (*283-84) (1859). Requiring a potential voter to identify himself or herself as a qualified elector through the use of Act 23-acceptable photo identification does not impose an elector qualification in addition to those set out in Article III, Section 1 of the Wisconsin Constitution.

The dissenters, unhappy with the precedent set by the ruling, took to task Republican legislators and justices whom they accused of ignoring the alleged impact of voter ID laws on minority groups. Via Media Trackers:

Dissenting from the majority in both cases was Chief Justice Shirley Abrahamson, a noted liberal, who savaged the majority for choosing to uphold the law.

“Today the court follows not James Madison – for whom Wisconsin’s capital city is named – but rather Jim Crow – the name typically used to refer to repressive laws used to restrict rights, including the right to vote, of African-Americans,” Abrahamson fumed in the opening paragraph of her opinion.

Voter ID will not go back into effect in Wisconsin until a federal court battle is resolved, but Abrahamson darkly mused:

“Indeed the majority opinion in NAACP v. Walker brings the specter of Jim Crow front and center. It invalidates costs incurred by a qualified Wisconsin voter to obtain an Act 23 photo ID as an illegal de facto poll tax.”

The problem with Abrahamson’s rant is that it has nothing whatsoever to do with the facts on the ground. Wisconsin imposes a high standard–“beyond a reasonable doubt”–on plaintiffs who allege a particular law to be unconstitutional, and those who challenged the voter ID laws failed to live up to that standard. Abrahamson is simply defaulting to the liberals’ favorite rallying cry of “racism!” without considering the terrible reality of what those words mean.

The National Park Service sponsors a very helpful website on the history of “Jim Crow,” and what discrimination in America looks like. For example, under the “Jim Crow laws of the years spanning from 1880-1960, Americans enforced segregation by:

And that’s just the tip of the iceberg.

In contrast, Wisconsin’s voter ID law simply requires that “an elector…present Act 23-acceptable photo identification in order to vote.” That’s right–the Chief Justice of the Wisconsin supreme court compared requiring a valid ID in order to vote to fining and imprisoning blacks and whites for being in the same public park.

Here’s what the majority said with regards to requiring an ID to vote:

We conclude, as did the United Stated Supreme Court in Crawford v. Marion County Election Board, 553 U.S. 181 (2008), that “the inconvenience of making a trip to a state motor vehicle office, gathering the required documents, and posing for a photograph surely does not qualify as a substantial burden on the right to vote.” Id. at 198. Furthermore, photo identification is a condition of our times where more and more personal interactions are being modernized to require proof of identity with a specified type of photo identification. With respect to these familiar burdens, which accompany many of our everyday tasks, we conclude that Act 23 does not constitute an undue burden on the right to vote. Payment to a government agency, however, is another story.

The Court then addressed the issue of charges and fees associated with obtaining the proper ID. Here’s the short version, pulled from a footnote to the opinion:

Put simply, the right to vote cannot require payment to a government or its agencies. This includes, of course, a “poll tax,” where a government directly requires and itself collects a payment in order to vote. See Harper v. Va. Bd. of Elections, 383 U.S. 663 (1966). It also includes, however, fees that a government agency other than a Wisconsin agency may charge for documents necessary to obtain a DOT photo identification card for voting. We cannot require other governments or their agencies to refrain from charging such fees. We can, however, explain that in order to constitutionally administer Act 23, the DMV may not require documents in order to issue a DOT photo identification card for voting that require payment of a fee to any government agency.

As the article from media trackers noted, “[a] more recent report by von Spakovsky from earlier this year looked at Tennessee’s voter ID law and found, “even with a new photo ID requirement in place for the first time, blacks still voted at a higher rate than whites” during the 2012 election.” Studies in Georgia and Indiana produced similar results. This means that even with an ID requirement, blacks and other minorities were neither prevented from voting, nor so put off by the inconvenience of obtaining an ID as to affect overall minority voting rates.

Data–actual data, as opposed to liberal white guilt–suggests that not only is there no undue burden imposed by requiring an ID to vote, but there is also no disparate impact (much less disparate treatment) affecting black and other minority communities.

The infamous Jim Crow laws were a deliberate attempt by racist segregationists to repress minorities and prevent them from participating in society. Voter ID laws, on the other hand, are efforts by legislators to protect our most important–and most powerful–right. Wisconsin’s law still has a few more legal hurdles to clear before it goes into effect, but yesterdays rulings stand to put immense pressure on both the federal courts, and on Justice Department officials who insist on injecting race into the fight to prevent voter fraud at the polls.

You can read the full opinion of the Court here.

Are U.S. citizens who are “people of color” any less likely than “white” citizens to have valid government ID?

Even though I am over 50, when I went to a bar with a friend the other day, we were carded. The doorman at this bar cards everyone. Don’t tell me that any 20-something does not have ID, to buy a beer or for admission into bars, nightclubs, adult entertainment venues and casinos. And every 30-something used to be a 20-something, and still has ID.

I recently went to visit my brother-in-law at the hospital. I had to show my ID.

I recently cashed a check at my bank. I had to show ID.

I renewed my library card a few weeks ago. I had to show my ID.

I was entering the Courthouse through the staff-attorney entrance, and I was asked for my Bar Card and my ID (I was not in a suit and I looked like a slob/general public).

Whenever I pay for anything using a check or credit card, the cashier asks for my ID.

Presumably, “people of color” are subjected to just as many requests for their ID as I am.

So who are all of the legal registered voters who the liberals claim the conservatives are trying to keep from voting, by requiring ID?

Voter ID would stop illegals from voting, and they universally vote Democrat. Vote fraud also seems to be most prevalent in Democrat strongholds. That’s who is being prevented from voting.

I still think someone should sue to block the ID requirement for buying a gun, using the same arguments that are used against voter ID. I’m sure some Justice Department lawyer would sprain something distinguishing the two.

Just trying to help lawyers make money, are you? 🙂

Jim Crow? How about Old Crow?

In Albany, there was far more scrutiny getting a library card (ID + recent letter or bill showing address) than voting. I didn’t even need an ID to vote. I pay about $125 per year for the library system, too.