Newly-released Pew survey shows much more sympathy for Israel among Americans than Palestinians. 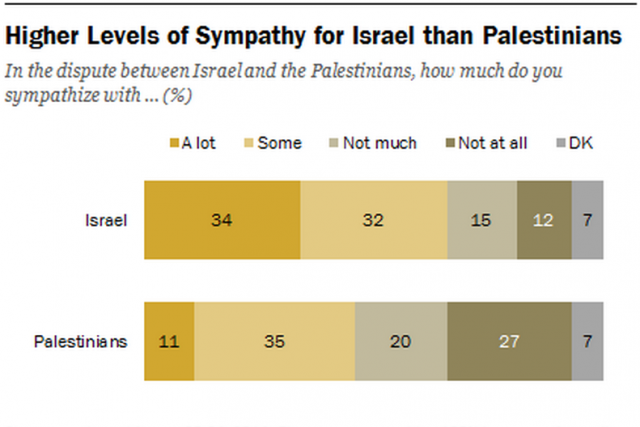 In July, in the early part of the Gaza conflict, Pew Research came out with a survey indicating that support among Americans for Israel’s actions in Gaza was strong overall and consistent with past similar surveys.

The July Pew study, however, indicated partisan gaps with much stronger support among Republicans than Democrats, with young Democrats the least supportive among all such categories. Support also was lower among minorities.

That July Pew study set off much angst and hand-wringing among Israel supporters, and unconcealed glee among Israel haters who convinced themselves that their anti-Israel view was just a generation away from becoming predominant American opinion.

But that earlier Pew study didn’t really measure support for Israel, as opposed to the conduct of the Gaza conflict. It would be entirely consistent to be a strong supporter of Israel yet not support Israel’s actions — either because you thought it did too much or not enough.

Prior Pew studies, as well as Gallup, conducted using the same methodology and questions over long periods of time, show support for Israel growing in the U.S. in recent years, although it is true there is something of a partisan and age gap.

A couple of days ago Pew released a new study, taken August 20-24, as to which side Americans sympthized with. True to my thesis, favorable views of Israel predominate and the gap is wide when compared to that Palestinians. This is significant considering how one-sided the media was in portraying Palestinians as victims.

Here are the summary findings of Pew’s report, More Express Sympathy for Israel than the Palestinians:

As a cease-fire ends more than seven weeks of fighting in Gaza, the public expresses more sympathy for Israel than the Palestinians in their ongoing dispute.

This survey, Pew notes, did not force people to choice one or the other. One could sympathize with both. That makes the strong pro-Israel findings even more dramatic.

The demographic breakdown exhibits some of the disparity as the earlier survey, but note that across almost all groups there is more sympathy for Israel, including the young and minorities.

Among the 18-29 age group the sympathy figures total 62% for Israel versus 50% for Palestinians. Again, the no sympathy vote favors Israel 31%-42%.

As one moves up the age brackets, sympathy for Israel increases dramatically. This may indicate a permanent generational gap that will carry forward, or it may just be that people grow more favorable to Israel as they grow older. Time will tell, but for now, there is hardly an age-based crisis. 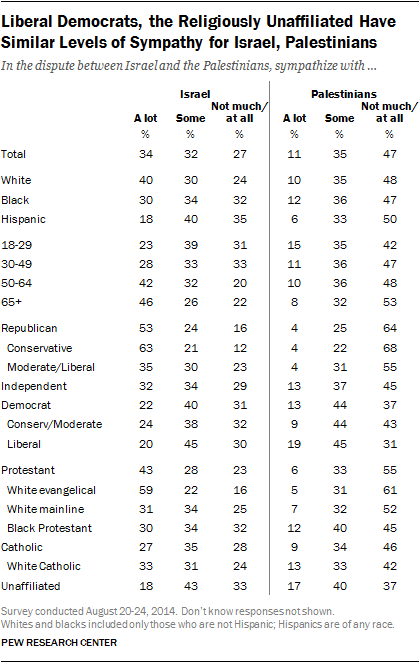 The earlier Pew survey this summer, which caused so much angst, forced the choice of one or the other, and was in line with top line historical trends favoring Israel: 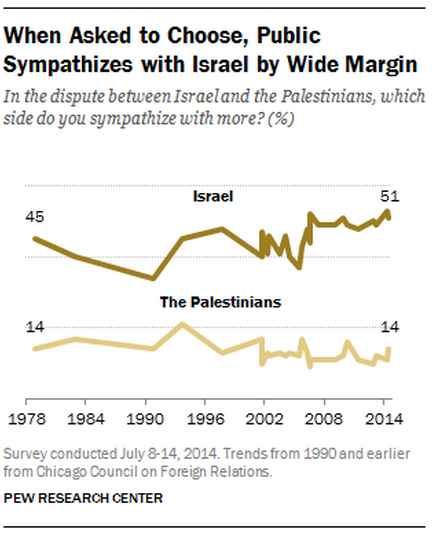 So what’s the bottom line?

Support for and sympathy with Israel remains strong, and does not appear to be damaged by this summer’s Gaza conflict.

My reservation about that study is that it doesn’t distinguish between sympathy for the Palestinians as a result of Israel’s actions, or as a result of Hamas’s, or just for their being caught in the middle. I doubt that much of the sympathy for ‘Palestinians’ attaches to Hamas, although it will be presented that way.

0
JackRussellTerrierist in reply to PersonFromPorlock. | September 1, 2014 at 1:55 am

There are even some Americans now who realize that Hamas hides behind women, children, the sick and the elderly for cover and propaganda. Even people slightly left of center despise cowards who do such things…..once they figure it out.

I think Fox News, Drudge and a handful of others are responsible for a meaningful measure of this enlightenment.

So groups with large percentages of anti-Semites are also pro-Israel; I suppose that’s comforting. It would make an interesting poll question – ask a few of those indirect questions to gauge anti-Semitism, then ask about Israel. (Actually, you would need to ask about Israel first.) Maybe it’s already in the ADL poll.

I was disappointed in the White Catholic response; we used to get a lot of support from there.