Will someone else jump on board to help Tenney fight the false narrative before it’s too late? 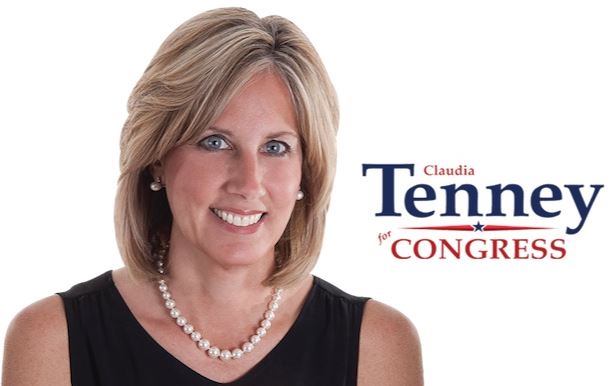 Tea Party candidate Claudia Tenney is facing a difficult challenge in her fight against moderate Republican Richard Hanna in their June 24th primary.

But Conservatives are beginning to line up behind Tenney in New York’s 22nd congressional district, and the Marine Mom just picked up her biggest endorsement to date in nationally syndicated radio and television host, Sean Hannity.

As reported here at Legal Insurrection, a flood of “false flag” Super PAC ads – to the tune of over $700,000 – have been launched in an effort to distort both candidates records, portraying Tenney as less of a conservative, and Hanna as more of one.  The ads, along with Hanna’s rhetoric as being a man about “conservative solutions,” are false.

Aside from the Super PAC onslaught, Tenney herself only has $150,000 in the war chest according to a radio interview yesterday, and is facing an incumbent that weeks ago had a Cantor-esque lead in the polls.  Like David Brat before her though, Tenney has the ability to turn that poll upside down, and pull off a similar upset.  But she needs support in the form of endorsements from high-profile conservatives to get across the finish line.

Hanna has more money and large PACs behind him. I think the tide could change in these last days, but it might take a big name political endorsement to help offset the PAC ads and reset the false narrative.

After our “false flag” piece went live last weekend, RedState’s Erick Erickson responded almost immediately with an endorsement of Tenney, while conservative media members such as Laura Ingraham and Michelle Malkin lent support via Twitter.  The buzz was buoyed by a column that Malkin wrote in support of Tenney, in which she called out the “laughable lies of liberal Republicans” in New York’s 22nd, and labeled Tenney “as rock-solid of a Republican as they come: pro-life, pro-limited government, pro-Second Amendment, pro-entrepreneur, pro-American worker.”

John Fund, a columnist with the National Review, also chimed in asking “Is Claudia Tenney the Next David Brat?” Fund writes that if there is to be a David Brat-style upset, the most likely source would be the “economically struggling” upstate New York area from which this race hails.

She says she’s grateful for the support and hopes Hannity’s recommendation will get through to residents who are listening to his shows.

“I just appeared on his radio show and he endorsed me. I’m very proud to have that as well since he is obviously a nationally known conservative commentator. It’s an honor,” said Tenney.

Tenney’s interview with Sean Hannity can be heard here, beginning at the 16:40 mark.

While Tenney is certainly welcoming these high-profile endorsements, along with those from the local and National Tea Party Patriots organizations, she could still use a big name political endorsement from a big name conservative politician.

Will someone jump on board to help Tenney fight the false narrative being delivered by establishment Republicans in New York?  And more importantly, will they do so before it’s too late?

I have reservations about this notion as it smacks of NY-23 back in 2009. In that election a conservative named Hoffman decided to primary an “establishment RINO” (Dierdre Scozzafava) who was polling for an easy victory. Folks like Hannity and Malkin and Levin got behind Hoffman, he won the primary, and the Democrat went on to win the general election in a district that hadn’t gone Democrat . Having a “conservative” candidate is fine if you have a conservative electorate doing the voting. NY-22 has voted for Democratic in Presidential races since 1998.

Electing the “more conservative” candidate in this case would well act to hand the election to the Democrat if the people doing the voting aren’t all that conservative. They would be nominating a candidate that is less in line with the people of the district’s views. Also, MOST people aren’t that partisan and watching food fights among Republicans over which candidate is “more conservative” is just as silly looking to them as seeing Democrats argue over which one is “more progressive”.

I find the money pouring in from outside the district to shore up the “more conservative” candidate to be potentially counter-productive. Why do people living all over the country feel such a need to impress their political ideology on people in a different state or district? Let the people there decide for themselves. NY-22 went Romney by only 0.4 points in 2012, it is not a deep red district. Arguing which candidate is the more conservative might be counter-productive and hand the seat to the Democrats. The district is not a deep red district. You need to be as “red” as you can possibly be and still get elected. Hanna might be too deep “red” for the general election in that district.

Sorry, your summation of what happened in NY23 is totally wrong.

There was a special election (which coincided with the November 2009 general election) called by the NY governor to replace John McHugh, a republican who went to serve in the Obama admin. There was no primary because NY does not allow for primaries for special elections for vacant house seats.

The state GOP nominated Dede Scozzafava, the conservative party nominated Doug Hoffman. Dede fell because she is a true RINO. She voted for gay marriage, got awards from planned parenthood, supported the pork laden 2009 “stimulus” union/public sector prop up bill from Obama, had strong ties with union leadership, and supported Obamacare with an even more ruinous public option.

So naturally her support plummeted in a republican district(51-49% in favor of the GOP). She withdrew three days before the election (her name was still on the ballot and absentee votes who went to her were before she withdrew were basically thrown in the trash) and she ENDORSED the Democrat.

She left the assembly and ENDORSED another democrat for her seat.

Secondly, the outside money “pouring” into the district is by Richard Hanna’s backers to try and re-elect himself by tearing down the conservative challenger. The people can’t decide for themselves when you have a liberal republican carpet-bombing the airwaves lying about his opponent. Try again please.

And finally, are you even aware of what is going on nationally? Did you not see the election for the majority leader? The GOP in congress has too many liberal GOP members. Until the GOP gets rid of these said members, the leadership will continue to be liberal (McCarthy has a 42% rating from Heritage). Do you think moderate/conservative democrats elected Nancy Pelosi? The answer is a resounding NO, because a majority of the democrat caucus is very liberal.

Conservatives don’t get what they want because they have liberals representing their districts in congress. So sending back another liberal republican is not going to change anything in Washington DC.

You advocate more of the same.

Pretty much sums up what I can remember. In almost, if not every case where a tea party backed candidate won a primary and lost the general, the RINO replaced REFUSED to endorse and work for the winning primary candidate, and, in many cases, actively worked for and endorsed the Democrat. In ALL hard fought close primaries in which a more conservative candidate lost, TEA party or not, the losing candidate has endorsed and campaigned for the winner. Liberals, Republicans or Democrats, are sore losers.

NY-23 aside, as I don’t necessarily accept the premise of what happened there, this is not something that will happen in NY-22. The Democrats didn’t put anybody up in this district, primarily because it’s a strong Republican hold. The winner of this primary is virtually assured of being the next Congressman/Congresswoman. Hanna could run again in the general on the Independence line, but there’s a reason all of this money is being poured in to help him now. But again, there are no Democrats to win the general election down the line.

Sorry, meant Tenney might be too deep red for that district.

Put yet another way: NY-22 is pretty evenly divided between D and R. It is a very purple district. Both D and R are going to vote in the general. What does Tenney bring to the table that would garner more D votes in November than Hanna? You don’t win the general by getting more of your own party’s votes, you win the general by getting more votes overall, that means getting votes from people who are NOT members of your own party. If Tenney wins the election and the seat flips Dem, I’m going to be rather upset at people like Hannity for moving the district left.

So what is the difference between a liberal Republican and a liberal Democrat?

Also, while I understand there is CURRENTLY no Democrat declared, that could change. A Democrat can still get on the ballot as an independent candidate all the way up to September. The Democrats might be waiting to see who wins this election and then run a candidate against an independent.

Also, the Democratic Party committee in the district could present a certificate of nomination for a candidate up until July 22 made by other than primary election:

There is no Democrat declared because they already have representation in the district. There are plenty of Democrats in R+1 PVI (Partisan Vote Index) and above districts. In fact there are:

5 Democrats in R+5 or greater

6 of the 9 EVEN PVI seats are held by Democrats

Those are TWENTY ONE seats held by Democrats that the Republicans should have. The Republicans have horrible GOTV efforts, uninspired messaging, and liberal members who are more worried about keeping their seats then taking the hint and retiring (Democrats get out of the way all the time, especially in their Senate seats).

Lets look on the other side of the PVI index:

4 Republicans are in D+1 seats

And lonely Republican Gary Miller in CA-31 is in a D+5 seat.

That’s IT. The Democrat party gets it. They represent their base and they get rewarded for their efforts by re-election time after time. Sure they complain from time to time, but it is because the Democrats are not going far ENOUGH.

Many of the GOP fight for personal power, their ego, and to protect and enrich their crony friends, whilst lamenting the Democrats doing it.

In addition, Hanna has a validated ballot petition on file affiliated with the “Independence Party” and if he loses the Republican primary, can appear on the November ballot as a candidate for that party.

Then he should definitely be replaced. Like most liberal republicans, he won’t go when he loses. He can run on the Independence line against actual Republican Claudia Tenney.

I heard her on Hannity, and she really needs to learn when to stop talking and let someone else get a few words in. She would go on and on and on, and when Hannity would eventually think he had a chance to say something, she’d start in again and keep talking over him. It’s hard to make converts if you come across as self-centered and rude.