Saturday Night Card Game: What does it say about modern progressive social justice thought that it is hard to tell progressive from parody — even for them!

It can be very hard to distinguish progressive political and social positions from parody.

Remember the video “White Guys: We Suck and We’re Sorry”? Was it parody?  Not sure we ever got a definitive answer on that.

What about Salon.com’s white writers’ obsession with Whiteness? Real.

There is a strange lack of connection of so many progressive manias to reality, that it’s hard to know what is real or not.  Even for progressives.

There was a major trolling of leftist feminists and Gender Studies types on Twitter, with the hastage “#EndFathersDay.”  It was started at 4Chan, but feminists ran with it apparently believing it to be true.  Some of the tweets were hysterical — but impossible to tell if part of the group trolling or the leftist feminists who thought it was real.

Twitchy and Frontpage Mag collected some of the tweets of people who thought it was real. Some had been deleted after being highlighted as stupid, such as this one (screenshot saved by Weasel Zippers): 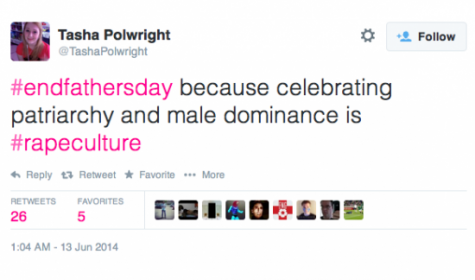 These people had a good laugh:

Ah, I'm told that #EndFathersDay is a joke started by 4chan's /pol/. Hard to tell satire these days cause of so many radical feminists.

Right now, a brave girl is tweeting about #EndFathersDay from the iPhone her daddy got her from her dorm room he's paying for.

Another hoax hastag that caught on was #whitescantberaped, playing off of White Privilege theory.

This one was exposed quicker, but not before the mockery was complete:

What’s scarier? That #whitescantberaped is a 4chan prank or that some progressive people took the hashtag seriously defended & explained it?

For all these fake progressive hashtags, Charles C.W. Cooke made the correct point that it doesn’t matter that they started out as parody, the progressives picked them up as if they were real:

It doesn't matter that people started a hashtag as a joke if real people then pick it up and use it.

What does it say about modern progressive social justice thought that it is hard to tell progressive from parody — even for them!

The Other McCain was on this story early. It is hilarious, but there are RadFems who take this stuff seriously.

Instead of ready to parody news site, The Onion, I read the MSM. No longer can the people who write The Onion top the weird, dystopian, “man bites dog” news that emanates from 1600 Pennsylvania Avenue and Capitol Hill.

Progress-o-crats and Lefties in general long ago eschewed facts and reality for feeeeeeelings and emotion. As societal controls slip more and more by the wayside, visceral emotion in all its extremes permeates society, and by extension, politics and its underpinning beliefs. Thus, we’re seeing the Left literally embracing anything and everything under the sun, and bereft of all logic, they are blind to all contradictions and hypocrisy.

Selective principles can be a bitch to coordinate.

Is individual dignity an oppressive paradigm of the vast-patriarchal conspiracy?

Is redistributing the product of people’s labor evidence of progress? Ah, the “good” old days.

How much private capital and personal information will health care “reform” capture? I thought people had a right to privacy.

Is state-sponsored abortion/murder an example of an unprecedented genocide or immoral women’s rights?

Spontaneous conception (aka “stork’s delivery) is real. I want to believe!

– until one is confronted with the reality and horror of the serious cases, such as Bill Clinton’s attack on Juanita Broadrick and the poor victim of the killer who suffered slightly longer than he was supposed to (but not long enough).

But the perpetrators of those crimes are the people the Left defends! In fact, this entire campaign goes back to an old book called “Men, Women, and Rape” which itself was a reaction to the Left excusing political rape.

My son, at age twelve, began interrupting conversations with “Don’t you know…!”

Instead they live within their swaddling world of hive-minded Newspeak friends, disconnected from reality and from others outside thier sandbox. Yet, they deem themselves knowledgeable about everything there is to know and demand the right to blather about it at all times and in all places. They will bang their on their high chairs until someone gives them attention.

Progressives are like the movie “Grond Hog Day” – they’re stuck forever in their Terrible 2 Twos!