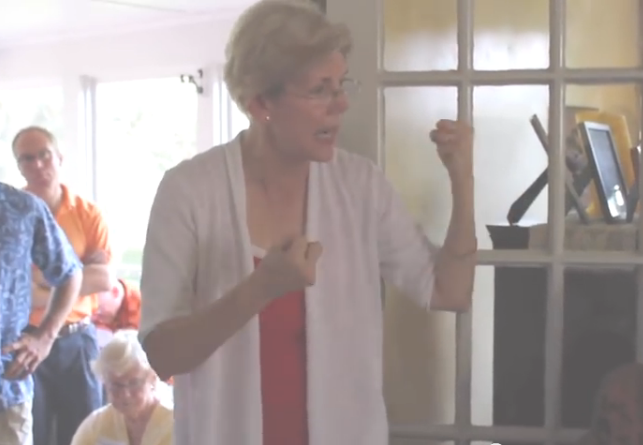 The Kentucky Senate race is essentially tied in the polling. A poll released today by a Republican pollster shows Alison Lundergan Grimes up by 3 points, within the margin of error.

Elizabeth Warren is about to inject herself into the race in a big way.

Warren’s student loan bill, which even an author at liberal Slate.com called “a glorified talking point,” failed to pass an early procedural vote on Wednesday.

In response, Warren declared war on Mitch McConnell, vowing to campaign and raise money for Grimes. The notion of taking political retribution is in keeping with Warren’s vow to have “plenty of blood and teeth left on the floor” of those who oppose her.

HuffPo reports, Elizabeth Warren To Hit Back At Mitch McConnell By Campaigning For Alison Lundergan Grimes:

Sen. Elizabeth Warren (D-Mass.) railed against Senate Minority Leader Mitch McConnell (R-Ky.) on Wednesday for failing to support her student loan refinancing proposal, which the Senate killed in a 56-38 vote earlier in the day….

When MSNBC’s Chris Hayes asked Warren how she planned to fight back, the senator gave a response that could shake things up in Kentucky, where McConnell faces a tough race for reelection against Democrat Alison Lundergan Grimes.

“One way I’m going to start fighting back is I’m going to go down to Kentucky and I’m going to campaign for Alison Lundergan Grimes,” Warren said. “She’s tough, she’s feisty, she endorsed the student loan bill, said she wanted to bring down interest rates for Kentuckians. … So my view is I’m going to get out there and try to make this happen for her.”

Seems to me that making Warren an issue in the race is risky for Grimes.

As HuffPo further reported, McConnell’s campaign previously has been trying to link Grimes to Warren to push the theme that Grimes is too liberal for Kentucky:

In a September fundraising email, McConnell told supporters that Grimes had hired “the top fundraiser from Elizabeth Warren’s record-setting campaign,” calling Warren “the most liberal, anti-business member of the Senate.” He warned that Grimes could have similar success.

In May, McConnell lamented Grimes’ front-and-center appearance on the website for the Democratic Senatorial Campaign Committee in another email to supporters, saying the committee holds events “with the likes” of Warren.

The McConnell campaign provided this statement:

“Elizabeth Warren is yet another anti-coal liberal senator sent by Harry Reid and Barack Obama to assist in their effort to continue enacting their anti-Kentucky agenda by getting Alison Lundergan Grimes elected. If there are any questions as to where Alison stands on the issues, look no further than the records of those in her inner circle.”

This may play well in Massachusetts, but how will it play in Kentucky?

Will Team Mitch go there, or leave it to others to raise the issue?

Kentucky has a population of Cherokee, if memory serves.

Wonder if they might be inclined to meet ol’ Princess Running Bare in an open forum…???

But, regardless, I doubt having a carpet-bagging, NE 1% liberal, pretend “friend of the working man” show up will be any kind of plus for Grimes.

Someone in KY should show Liz what a coal miner’s hope looks like with EPAma in office: There’s no light at the end of the tunnel. They don’t have a Fighting Chance.

Just wait! Wouldn’t be surprised to find out some of her ancestors were coal miners

“Will Team Mitch go there, or leave it to others to raise the issue?”

Mitch will go there via surrogates, the group of which may include Rand Paul, who could improve his position with McConnell while setting the lines with a potential opponent in Little Running Mouth. I’ve noticed Paul has an ability for snark, which indiciates a proclivity for snark, and the Cherokee thing is custom made for snark.

Picture a 30 sec TV ad…. they mimic that old environmental PSA with the closeup of the crying Indian chief surveying the trashed plains. While a closeup from behind of the Indian looking out into the fields runs on the right half of screen, the left side shows a parade of headlines about Warren’s Cherokee claims, especially those showing how Warren stole exclusive jobs based on lies. The Indian chief’s head is slowly turning round through this and at the end he’s facing the camera, tear running down his cheek.

Henry – Better yet, make the Indian a woman tribal elder.

Yep, this liar is one of my two federal senators. The other one, Markey, is as certifiably lefty loony as the lying senator. Actually they, along with all other elected Democrats, are all liars: none has the least intention of obeying a word of their Article VI oaths of office.

This loon, who is well into the privileged 1%, may play well in the Gay State. But fortunately KY doesn’t think like the lefty states.

Or is that Witch State…….