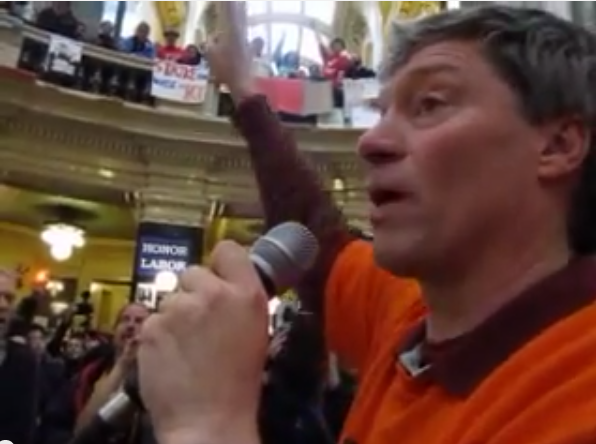 Democratic candidate for governor Brett Hulsey plans to hand out white Ku Klux Klan hoods to Wisconsin Republicans to highlight what he says are their racist policies.

Hulsey on Thursday came into the state Capitol press room to show off a white hood he says he made with his daughter’s sewing machine using curtain material he purchased for $1.

Hulsey, a state representative from Madison, is running a long-shot campaign for the Democratic nomination against the better funded and more broadly supported candidate Mary Burke.

Hulsey says he will attempt to hand out the KKK hoods to Republicans as they gather Friday for the state party convention in Milwaukee.

State GOP executive director Joe Fadness calls it a “reprehensible, vile stunt” that should outrage everyone. 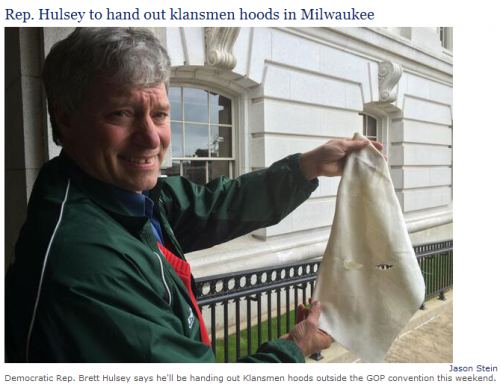 The Madison representative running for governor got little attention for his plan announced earlier this week to portray Republicans as modern-day secessionists by dressing up as confederate soldiers and parading outside the GOP convention in Milwaukee.

So Hulsey said that he sewed a handful of Ku Klux Klan hoods to take with him in an attempt to mock Republicans. Standing in the rain outside the state Capitol Thursday without an aide or other sign of a viable campaign in sight, Hulsey showed off the ragged hood he had made to a reporter.

This will not surprise you — Hulsey was front and center in the take over of the Wisconsin Capitol in 2011:

At the 1924 Democratic National Convention in NYC, a resolution was presented to disassociate the Democratic Party from the KKK. By a slight majority, the delegates to the national convention voted to keep that association. That convention became known as The Klanbake Convention.

I hope someone grabs the hood and puts it on his head, then kicks the crap out of him on TV. Would be nice to see a Democrat in his KKK hood getting his butt kicked once again…Just like old times!

What the klan really was is irrelevant to this candidate. He’s running in the Democrat primary against Democrat Mary Burke for the nomination to run against Scott Walker for governor. He plays here only to other Wisconsin Democrats who think like this: Republicans are racist. KKKers are racist, therefore Republicans are KKKers. Facts gain no purchase here.