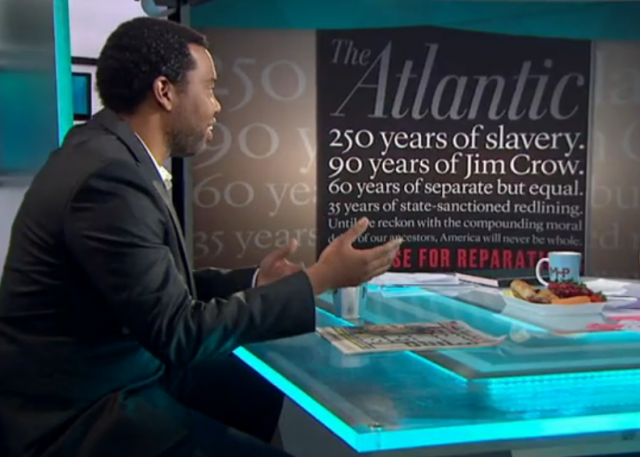 Coates never gives the answer as to who gets what and how.

And that’s ultimately the problem with reparations arguments that are not based upon the people causing the harm paying the people directly harmed by specific conduct soon after the conduct is remedied.

As Coates explained his views to Melissa-Harris Perry this morning, it became clear that there is no sense at all of holding the guilty accountable in the sense we normally do, or compensating actual victims.

There is a complete disconnect between cause and effect — anyone with a particular skin color is presumed to be a victim of policies even from generations earlier. It’s a simplistic and non-evidentiary approach which generalizes anecdotes and ignores the myriad of factors that influence success or failure in life.

That Coates’ so easily acceded to Harris-Perry’s suggestion that women fit Coates’ reparations narrative too, reflects the impossibility of the reparations agenda. The same answer would apply to numerous other groups as well.

And so the true reparations absurdity is revealed.

A vast majority of the country is owed reparations, but also has to pay reparations. It’s just a shuffling of money.

The only way to do this is, as Ezra Klein suggests, just have the Treasury print more money and give it to people.

Jamelle Bouie at Slate reflects this redistributionist attitute, common among supporters of Coates’ article.  Use the government to take and to give on a massive scale. Also known as Tax and Spend:

Instead of cash, the federal government would implement an agenda to tackle racial inequality at its roots. This agenda would focus on major areas of concern: housing, criminal justice, education, and income inequality. As for the policies themselves, they don’t require a ton of imagination. To break the ghettos and reduce the hyper-segregation of black life, the federal government would aggressively enforce the Fair Housing Act, with attacks on housing and lending discrimination, and punishment for communities that exclude low-income residents with exclusionary zoning.

Haven’t we been doing most of that for the past 50+ years. How’s it working out?

It think the redistribution agenda explains a lot of why the reactions to Coates’ article are so over the top from liberal writers and pundits. 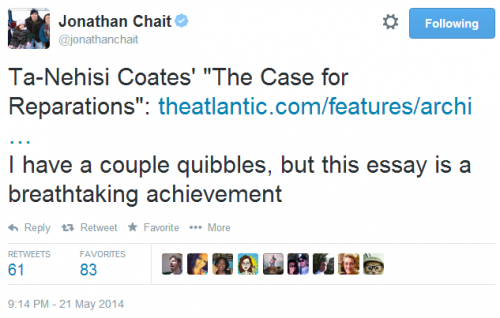 Reparations to African-Americans has been a topic of discussion for decades, and using analysis similar to that of Coates, but the reaction to Coates’ article is that he has come upon something new.

So why this reaction now?

Reparations, or at least a discussion of reparations, fits the narrative.

Whatever we have, was gained unfairly.  Whoever doesn’t have, was cheated.

The entire system is rigged.

You didn’t build that on your own.

Even though the discussion will go absolutely nowhere, it’s a discussion Democrats are happy to have.

Update: Prof. Stephen Bainbridge wrote in 2009, when the issue of slavery was raised (as it has been periodically):

As a matter of compensatory justice, however, reparations for slavery differ significantly from the Holocaust or Japanese internment. In the latter cases, there were living victims whose injuries could be redressed. In the case of African-American slavery, there are no living victims or even immediate descendants.

Courts have routinely held that descendants of slaves have suffered no legally cognizable injury for which they have standing to sue. In his decision in the African-American Slave Descendants Litigation case, for example, federal district court judge Charles Norgle rejected the plaintiffs’ argument that they suffered continuing harms, in form of racial profiling, racial slurs, and shorter life expectancy, as result of the enslavement of their ancestors.

Slavery was a great injustice. Yet, there is no moral case for reparations. None of the principal legitimate purposes of punishment — deterrence, compensation, or retributive justice — would be served by requiring corporations to pay such reparations.

What might work would be a suit by blacks against the Democratic party (no sovereign immunity) for all the ‘help’ blacks have gotten from them in the last fifty years.

I’ll settle for a suit against the Democratic Party for the KKK and Jim Crow.

I’ve decided that they’re baking up the wrong tree. Maybe the case for Reparations should go something lime this:

“The United States Government, under the auspices of The Great Society and Related Social Welfare & Entitlement Programs (see attachment 1), has destroyed the lives, opportunity, nuclear family unit, educational and vocational progress and quality of life of African-Americans in the United States and its Territories.”

I do not begrudge people their wealth. The issues which concern me are Life, Liberty, and the pursuit of Happiness. This means that we need to address the normalization of elective abortion/murder, the exploitation of unmerited leverage to dominate others, and progressive policies which devalue capital and labor.

Take from one race to give another.

They call it reparations, I call it racism.

Hey, this is fun. Rome sold a large percentage of the Jews in Israel (those they didn’t murder) into slavery; let’s get reparations from Italy!

Although I really think Africa should pay the United States for selling their citizens into slavery.