DA Cannizzaro: “Following Coulter’s most recent burglary arrests, any case that this office had against Landry was irreversibly damaged.” 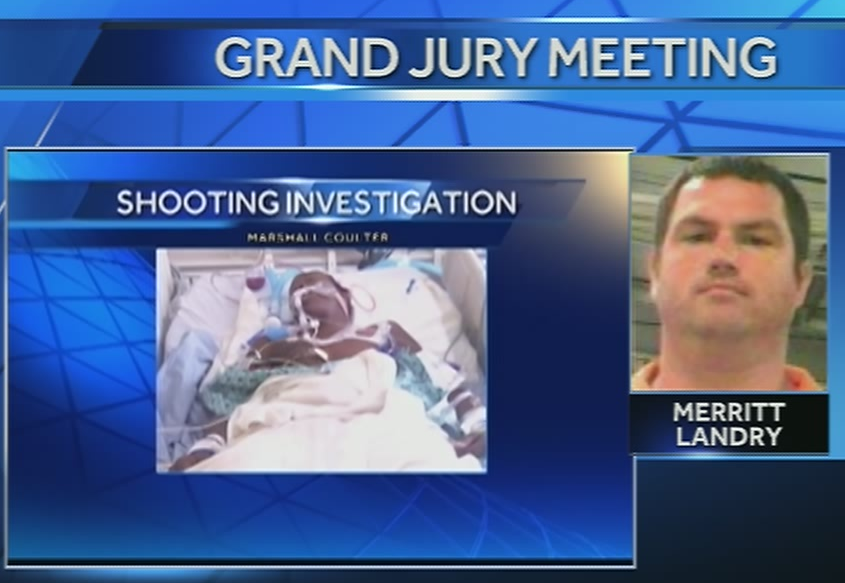 Oh Lord, it’s hard to be humble, when my self-defense law predictions are so often right.

The New Orleans Times Picayune is reporting  today District Attorney Leon Cannizzaro of the Orleans Parish District Attorney’s Office officially announced they were dropping their efforts to prosecute Merritt Landry for attempted second degree murder over Landry’s shooting of then 14-year-old Marshall Coulter through the head . (h/t @nadraenzi, aka “capblack,” who has been a vigorous supporter of Landry since the start.)

It was just twelve days ago that we reported here at Legal Insurrection about Coulter’s arrest on new burglary charges, (Teenage burglar in high-profile New Orleans self-defense case burglarizes again) and only nine days ago that we also reported here that Coulter had been freshly charged with a home invasion he allegedly committed when he was a mere 13 years old (Teenage burglar in New Orleans self defense case charged in separate home invasion).  In that incident Coulter is claimed to have threatened the surprised and frightened homeowners with their own firearm.  We ended that second post by noting:

One would think that this latest news can only accelerate the date at which prosecutors will formally  cease their efforts to prosecute Landry on the attempted second degree murder charges on which they have been unable to get an indictment after multiple attempts, even prior to Coulter’s latests series of arrests.

Boom. Today District Attorney Cannizzaro released a statement explaining the decision of his office to drop the case:

Cannizzaro also seemed quite displeased with having been misled by Coulter’s family about his physical condition, which has self-evidently improved sufficiently for the now 15-year-old to be arrested on fresh burglary charges.

Based on numbers interactions with Coulter, as well as interviews with his family and healthcare providers, we were repeatedly led to believe that he was in what can best be described as an irreparable, semi-vegetative state.  When we visited with Coulter less than three months ago, we were led to believe that he could not walk without assistance and could only provide single-word responses to the simplest questions.

And that, ladies and gentlemen, would seem to wrap up the Merritt Landry self-defense case.

Next up:  The Joseph Walker trial, set to begin in less than a week, on Wednesday, May 21.  This is the case of the New Jersey police officer who shot and killed  in an apparent road rage incident in Maryland.  We’ll be covering the trial as closely as circumstances permit–if the trial is broadcast, I’ll be live-tweeting it and doing one or two updates per day right here at Legal Insurrection.  If it’s not broadcast, we’ll cover and post as news breaks.  Prior to the trial I will post up some background on the relevant Maryland self-defense law, to set a solid foundation for our understanding of the case as it unfolds at trial.

For our past coverage of this case from the very first reports, see below (in reverse chronological order):

Off-duty cop “Road Rage” 911 call: “They were going to fight on side of road”

It’s just too bad that Landry didn’t get off a 2nd shot, or aim the 1st more accurately. After all, dead men tell no lies.

Reveals Anger at Family for Exposing His Gullibility/Racism.

Up and Coming Burglar and Home Invader’s Career Nipped in the Bud.

The local newspaper also let slip that the 14 year old’s fingerprints were all over the house shutters. This had not been made public. Whether this had been withheld evidence from the defense or the grand jury is not clear. The comments in the article show that the public is furious over the spin by the DA’s office and the local media. The NOPD and DA knew the little burglar had been trying to gain entry into the house and pursued this man anyway from the very start.

Lets see if this link works. It mentions the finger prints at the bottom of the section labeled; “Teenager’s new troubles”

Fingerprints on shutters on Landry’s house?

Where did you read this?

The linked Times-Picayune piece has it.

Tom, thanks for pointing out the relevant portion of the article, and thanks, Gremlin, for the link.