The second most populous country in the world just elected a strong pro-Israel leader and party. 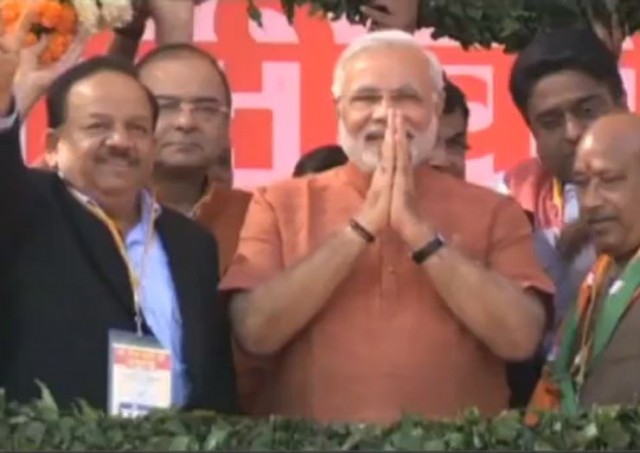 I don’t know much about Indian politics, so I haven’t written about the election sweep which threw out the long-dominant Congress Party.

I do know that successive Indian governments have had at times contradictory relations with with Israel; not as crazed anti-Israel as many, but not solidly on Israel’s side either.

Indian-born writer Vijeta Uniyal believes that the election signals a sea change both politically and economically, with India looking to Israel for technology and investment to jump start the moribund Indian economy, India’s PM-elect Narendra Modi: a friend of Israel:

Narendra Modi is the next Prime Minister of India. Modi’s NDA-Alliance won 336 out of 543 seats in the Indian parliament. He has routed the ruling Congress Party led by Rahul Gandhi, the 4th generation member of Nehru-Gandhi dynasty

Modi is arguably one of the most capable administrators in India. As Chief Minister of Gujarat State (2002-14) he turned around the economy, created infrastructure and improved public services. With a population of 60 million, Gujarat’s per-capita GDP today is much higher than India’s average.

A lot of ink has been spilled in the international press over this relatively unknown man now at the helm in New Delhi. However there is one story readers in Israel need to hear: Modi is a friend of Israel, the like of whom India has not seen before.

This fact can be stated without any exaggeration or wishful thinking. All one needs to do is to look at Modi’s track record.

Modi is the first Indian leader to have actually visited Israel. He has often expressed admiration for Israel’s achievements in research, technology and innovation; espacially in the field of agriculture and water resources.

Every year more than 2000 farmers from Gujarat visit Israel to get trained in advance farming techniques – at their own expense. He welcomed Israeli Companies to enter water management and recycling sector in 50 cities of Gujarat; and invited Israel to be the guest country at Gujarat state’s flagship Agricultural Fair (Vibrant Gujarat Agro Tech Global Fair 2014).

Snubbed by US on the basis of allegations relating to his role in 2002 Hindu-Muslim riots, Modi has held excellent working relationship with Israeli business community and diplomatic mission. He has worked to create an industrial fund to promote joint ventures between Israeli and Gujarat-based companies.

Keep reading. The second-most populous nation in the world will be rapidly expanding trade with Israel and looks to Israel as a political model.

The anti-Israel Mondoweiss website has the same analysis Shalom Modi: India and Israel look to deepen ties following victory of the Hindu right.

The Indian election was accompanied by news of expanded Israel-China academic research ties.

The heart of BDS is in Europe. But Israel’s economy increasingly is looking East, not West. Europe still matters tremendously, but it will be less so in the coming decade.

BDS is a malicious ideology, a reflection of the oldest hate, and needs to be addressed. But I said it before and repeat, political decisions should not be made from a position of panic over BDS.

Gullible students on campuses are being fed fools gold by their professors and other BDS organizers.

The “landmark,” supposedly most historic campus victory for BDS was when Wesleyan University’s student government fund decided to divest from companies doing business in Israel. That fund has a few hundred thousand dollars in it. It’s as if some individual decided to divest his or her healthy retirement account.

Compare that to the billions of new trade Israel will see from India and China alone.

If anything, BDS should be the one panicking over the reality of Israel’s strengthened economic and political ties to India.

The only thing you need to know about those elections is that 550,000,000 people showed up to vote and each and everyone of them managed to obtain a voter ID with their picture….

Our country is led by a crazy man.