Remember when liberals accused Sarah Palin of using her own child, Trig, as a campaign prop? 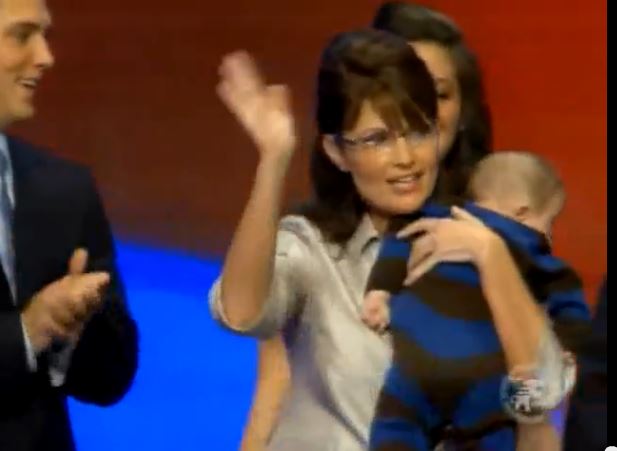 It would be perfectly natural for Hillary to show off the grandbaby, particularly if, as expected, she runs for President.

I can envision the family, including grandbaby, on stage at the Democratic National Convention in 2016 as Hillary accepts the nomination — maybe with Don’t Stop Thinking About Tomorrow playing in the background

Hillary more than anyone needs humanizing, in what already is a multi-year rebranding project.

And Hillary isn’t waiting for the arrival to publicly express her joy: 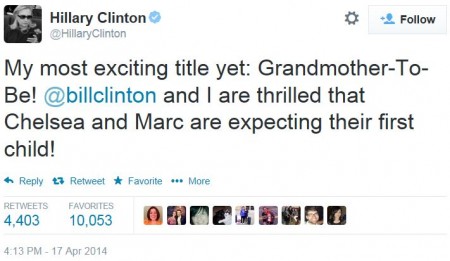 Will Hillary be treated like Sarah Palin was back in 2008, when Palin appeared with her own child Trig, and was accused of using him as a prop?

From the Legal Insurrection archives:

Then there were the attacks on Palin for bringing Trig on stage at the Republican National Convention, and with her on the campaign trail. HuffPo blogger Suzy Shuster wrote after Palin brought Trig to the V.P. debate in early October 2008:

It actually came after the debate, when for seemingly the millionth time, Sarah Palin trotted out her piece de resistance, her favorite prop of this campaign season: her five and a half month old son Trig. Why is this child up so late every time there is a camera op? … My point is, if Palin is going to keep shoving the motherhood card down our collective throats, maybe she can start being a mom again and stop using her own kid for political gain. Trig deserves a good night sleep.”

In addition to keeping Trig up all hours of the night so that she can parade him around a stage after a pitiful debate performance or speech, she’s decided to use baby Trig to get some lusty applause out of the audience, because, let’s face it, there’s nothing evangelical Christians love more than a developmentally disabled baby they can use to their own end.

The accusation that Trig is used as a “prop” has continued to this day. Megan Elaine at Political Inaction, who accuses Palin of “pimping” Trig in the most recent issue of Runner’s World:

it’s amazing that Palin is, once again, using Trig as a prop. I mean–is it really necessary to have the baby in a picture with her for Runner’s World?? Again, we see her willing to pimp out her children, until one of them gets knocked up. Amazing.

If showing off your own child leads to being accused of using the child as a prop, how about showing off the grandchild?

Applying that standard to the Hillary grandbaby apparently is off limits (jump ahead to 3:20)(added — text from TPM):

The gang on MSNBC’s “Morning Joe” is usually game to analyze (if not set) the latest political narrative, but as Andrew Ross Sorkin proved on Friday, even that show has limits.

“Can we talk about the human drama that is Grandma Clinton?” Sorkin asked, referring to Chelsea Clinton’s announcement that she’s pregnant.

“I don’t want to be cynical and I’m not suggesting anyone’s having a baby for election purposes, but —” Sorkin added before being drowned out by the panel’s collective groans.

And with that, Sorkin had lost the room, despite his best efforts to salvage his argument. He insisted that the pregnancy was a game changer for Hillary Clinton.

“It’s gonna change the dynamic of the campaign,” he said.

“It’s a softening, there’s a compassion thing,” Sorkin explained. “You don’t think that over the next two years on the campaign trail this is gonna be part of the narrative? Come on. That’s interesting.”

The other panelists did not find his observation interesting.

Palin should not have been criticized for using the child as a “prop” and neither should Hillary. But don’t expect consistency there form the media. Hillary will be vigorously defended.

Wow! At his advanced age, I’m surprised that Bill can still get it up.

Maybe the pregnancy will give Chelsea or Hillary a headache, which will lead to the baby being aborted, which Hillary will celebrate as heroic.

LI gets the most inept trolls on the internet. How is that possible? Over and over.

Remember that kid from Wisconsin during the 2012 primaries? He was entertaining at least. All the other ones just offer ‘you all are poopy heads!’ and call it rebuttal. You’d think Liz Warren could afford better.

missed this earlier,, I vaguely remember something about him but not much.
funny that my joking comment got thumbs down, people need to get a sense of humor and get over themselves.

Anyone with half a brain (and that’s the most you’ll find in any lib) refuses the troll assignment to LI to avoid being embarrassed. I actually feel sorry for the trolls here. Talk about outclassed…

She still has plenty of time to abort in NY .

Hillary Clinton deserves no mercy. Hecklers should ask her at every gathering how it was that her Whitewater filed suddenly “reappeared” after the Statute of limitations ran out. They should also ask why she tried to blame the blowups on 9/11/12 on an obscure video by an even more obscure Coptic immigrant and insinuate that Free Speech is too dangerous a liberty for us mere yokels when there’s sensitive diplomacy going on in the Middle East (like almost getting snookered into during the dirty work for Erdogan’s neo-Ottoman designs in Syria).

Ask her how she would’ve reacted had she been POTUS when that Chinese general asked her hubby if Taiwan was worth a nuclear-blasted LA.

Every flaw in this man-woman-b***h-goddess’s past should be taken out and flown from flagpoles across the land. Every lie in which she’s ever been caught should be broadcast everywhere.The future of the country depends on this woman not returning to the White House.