Disillusionment of liberal Millennials may be Obama’s greatest legacy

Disillusionment of liberal Millennials may be Obama’s greatest legacy

I can see November from the Harvard Millennials survey

A new national poll of America’s 18- to 29- year-olds by Harvard’s Institute of Politics (IOP), located at the John F. Kennedy School of Government, finds low expected participation for the midterm elections as less than one-in-four (23%) young Americans say they will “definitely be voting” in November, a sharp drop of 11 percentage points from five months ago (34%). Among the most likely voters, the poll also finds traditional Republican constituencies showing more enthusiasm than Democratic ones for participating in the upcoming midterms, with 44 percent of 2012 Mitt Romney voters saying they will definitely be voting – a statistically significant difference compared to the 35 percent of 2012 Barack Obama voters saying the same.

“The Institute’s spring poll shows 18- to 29- year-olds’ trust in public institutions at a five-year low – and their cynicism toward the political process has never been higher,” said Harvard Institute of Politics Director Trey Grayson.  “To inspire the next generation to public service – and to improve our communities – our elected officials need to move past the bitter partisanship and work together to ensure progress and restore trust in government.”

“It’s been clear for some time now that young people are growing more disillusioned and disconnected from Washington,” said Harvard Institute of Politics Polling Director John Della Volpe.  “There’s an erosion of trust in the individuals and institutions that make government work — and now we see the lowest level of interest in any election we’ve measured since 2000.  Young people still care about our country, but we will likely see more volunteerism than voting in 2014.”

Maybe disillusionment of liberal Millenials will be Obama’s greatest legacy. He over-promised and under-delivered. 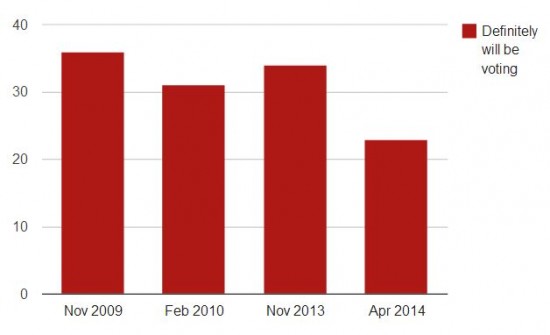 Obama and the media painted a false world to the millenials which they bought hook, line, and sinker.

Then Obama and his allies destroyed the economy (recovery my ass).

But the Republicans have to paint an appealing alternative. That doesn’t mean a 47 point plan and it certainly doesn’t mean Obamanomics light. They need to give people a choice, not an echo.

Reagan could do this…but the Republicans haven’t had someone who could in a long time.

Also, like Reagan, the Republicans need to start actually pinning the blame where it is due – Obama, Reid, Pelosi, etc.

Why the hell aren’t we seeing people point out what real unemployment, real inflation, and the real deficit were in 2006 before Obamanomics was implemented compared to today’s stagflation?

Economy was good in 2008? Omg here we go all young ppl/liberal/ minorities are brainwashed and the only free thinkers watch foxnews right? Bush was a perfect president and the two wars helped our economy. And then Obama brought in welfare and big government and then every failure imaginable started. Vote Ted Cruz

The economy was pretty good in 2006, and significantly so compared to the current Obamaconomy, by any metric you want to compile.

And 2006 was just before Democrats took over Congress, and the deficits began to rise.

“Bush was a perfect president and the two wars helped our economy.”

A new Straw Man erector! What kind of moron even attempts this crap?

Like I keep saying, LI draws the most inept trolls out there. And it’s easy! But no… this is what we get. I’m not even sure this qualifies as trolling.

Over promising and under delivering is what politicians do. The youth were naive and stupid enough to believe the lies which frame every election. They thought they were smart, informed and on top of everything cool. Well, cool doesn’t make up for a track record of lies, corruption and incompetence. The youth always think that they know better. That they have it all figured out. Life just smacked them a big one and they are the ones suffering the most.

We understand you are too stupid to understand the Straw Man Fallacy, so I’ll help…

“Bush was a perfect president and the two wars helped our economy.”

Post a link anyone who…in the real world…EVER said that.

Next, how does that work to exonerate Pres. ScamWOW for all the damage he’s done?

How many times have we heard/read that if Bush did it, that excuses Obama doing 100x worse?

I’m behind a firewall so I cannot provide a link.

See if you can find “Guncrank Diaries, Unlikely Allies”

Per this article, it seems that some millennials have had a cold dose of reality smack them in the face, how before 2009 it was all “defy authority” etc. After 2009 it was “don’t question authority; obey the government, embrace the collective”.

I have only seen a couple of these “millennial orphans” on the net. Supposed to be more. Maybe someone can figure out how to lure them here?

That’s why I don’t understand why conservatives continue to insult Americans that don’t vote for them…..