For Politico and others, “sorry” seems to be the hardest word. 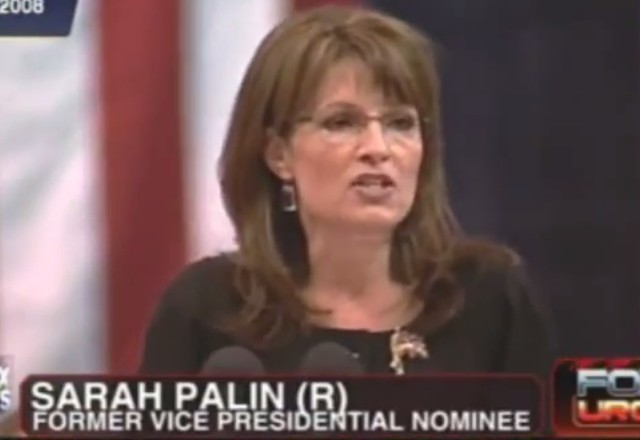 Please see Mandy for more coverage of the crisis here.

As Brian and Neo have previously posted, during the 2012 campaign Mitt Romney was mocked by President Obama and his cheerleaders for highlighting the Russian threat to American interests.

Romney wasn’t the first Republican mocked for suggesting that Obama wasn’t ready or willing to stand up to Russia’s leader.

In October 2008, after Russia’s invasion of neighboring Georgia emerged as a foreign policy flashpoint in the homestretch of a heated campaign, Palin told an audience in Nevada, “After the Russian army invaded the nation of Georgia, Senator Obama’s reaction was one of indecision and moral equivalence, the kind of response that would only encourage Russia’s Putin to invade Ukraine next.”

Her prediction was derided by Foreign Policy magazine  as “strange” and “extremely far-fetched,” but Palin, frequent media antagonist that she is, couldn’t resist crowing about how events have played out.

Twitchy, it seems, never forgets. (In this case aided by Jammie Wearing Fool.)

Yes, I could see this one from Alaska. I’m usually not one to Told-Ya-So, but I did, despite my accurate prediction being derided as “an extremely far-fetched scenario” by the “high-brow” Foreign Policy magazine.

Twitchy (again) notes that the editor in question is digging deeper. 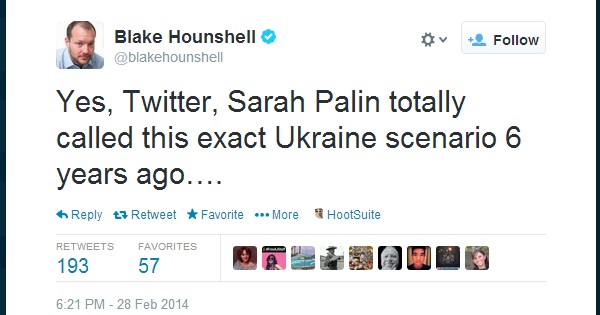 Earning himself an appropriate rebuke. 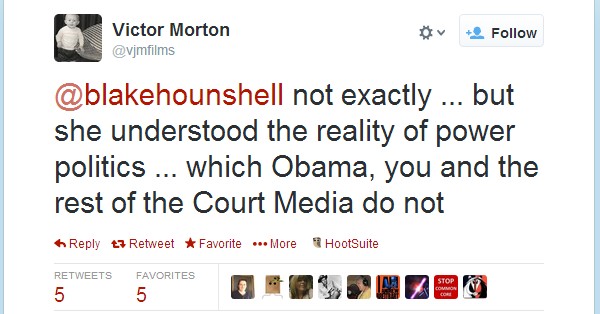 Speaking of the “Court Media,” here’s a line from the Washington Post’s endorsement of President Obama in 2008.

And we find no way to square his professed passion for America’s national security with his choice of a running mate who, no matter what her other strengths, is not prepared to be commander in chief.

I am still waiting for the comeuppance of the mainstream media. While they are losing readers and viewers, they still seem to set the political agenda. Their mindless shilling for Obama – in both foreign and domestic policy – should have damaged their credibility as unbiased observers beyond repair. It still hasn’t happened. Though I expect that stories like this bring that day closer.

So-called elites can’t see Russia, period–
not from Harvard, not from Yale.

[…] Related: “Hurts so bad that Palin was right and Obama-Media Industrial Complex wrong,” David Gerstman writes at Legal Insurrection. “For Politico and others, ‘sorry’ seems to be the hardest word.” […]

Maybe she can see Russia from her house.

Maybe she can see Russia from her house.

Oh, yippee. Another brain-dead leftist who thinks it was Palin – and not Tina Fey – who actually said those words.

Why are you here? Got lost on your way to PuffHo?

Being a Leftist means never having to say you’re sorry.

Or that ANYONE on the right/conservative side has a brain, isn’t evil, isn’t…